Abortion Poll: For or Against? - Ms. Magazine
Skip to content 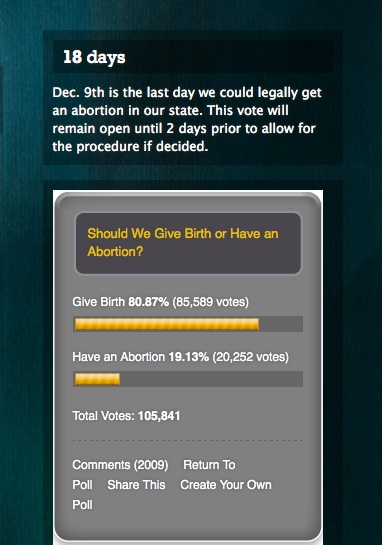 I’m taking a poll. If you were pregnant and weren’t sure if you wanted to continue the pregnancy, would you discuss it with your partner, a doctor, a clergyperson? Would you seek other professional advice to  sort out if this is the right time–professionally, financially, psychologically, emotionally or from a health standpoint–to bring a child into the world?

Or, would you just go to an online service and publish a poll asking perfect strangers of unknown competency, caring, religious affiliations or other biases for their opinions about whether you should give birth or have an abortion?

If you answered yes to the latter, oddly enough you’re not alone. That’s exactly what Pete and Alisha Arnold of Apple Valley, Minn., did. So far, more than 100,000 people have voted in their poll, and “Give Birth” is winning by a huge margin.

The poll has also generated a firestorm in the blogosphere, with bloggers dissecting their motives and trying to figure out if they’re serious about acting on the poll results, if it’s a prank to get attention and launch a career in reality television or an anti-choice stunt.

It’s not clear why someone would spend $899 (the cost for such a large poll) to elicit answers to such a personal question from total strangers. But let’s assume, for the sake of argument, that they’re seriously searching for an answer. What should someone do who’s undecided about a pregnancy?

I’d suggest going to a professional such as an abortion provider for information and advice. And I can just hear the response from anti-choice propagandists: But providers go out of their way to convince women to have abortions in order to make a buck, no matter what!

Really? I put the question to a number of providers of how they deal with those uncertain about whether or not to abort.

–“Someone who is undecided, let alone acting as though it does not matter one way or the other, is not going to have an abortion in the clinic I worked at for more than 30 years,” says Claire Keyes, former director of Allegheny Reproductive Health Center in Pittsburgh, Pa.

–“This is not a reality show; abortion is a serious matter” says Peg Johnston, president of Abortion Care Network. Johnston would refer her “to a therapist for people who are trying to decide.”

Ambivalence isn’t unusual among pregnant women, and many clinics have in place a process to assess the “mental and emotional stability” of those who come for services and help them decide what’s in their best interests. It starts with an intake procedure that gives the counselor an idea of any issues that may reflect uncertainty or coercion, or anything that sends up a red flag–like considering  a second-trimester abortion based on the results of an online poll!

Normally, when faced with a patient they believe hasn’t resolved what she wants to do, many counselors provide the Pregnancy Options Workbook to take home. This comprehensive, caring and professional book walks them through the decision-making process with exercises and questions, such as: Do I want to have a baby? Will the child have a father who is “there?” Can I afford to have a child? What will happen to my goals, my hopes, my life? What about adoption? All of the questions are designed to help women decide if it’s the right time “to bring life into the world.”

“We only want her to come back to the clinic if abortion is what she wants,” says Chelian. This counseling is free and Chelian is “happy to do it. That’s what a dedicated health care professional does.”

Unfortunately, abortion providers are often treated as outliers of the medical profession. It’s clear some providers should be the model for compassionate health care. One thing’s for certain: Your health care and other major life decisions shouldn’t be based on the results of an online poll.

I was shocked, shocked! to learn this poll is a publicity stunt.

Actually, I wasn’t. I was pretty confident it was a hoax dreamed up by some anti-choice people to make a point about how cavalier they believe pro-choice people are. They thought they’d show that public sentiment is overwhelmingly anti-abortion, I suppose, and that pro-choice people would just automatically vote for abortion–as if we think everyone should have one.

It turns out the poll poster and purported prospective father trolls the internet under the pseudonym Zeeboid stirring up trouble. Although I have to confess I have a little sympathy for the guy, he drives a Dodge Neon and as he said in one of his posts, “Neon owners take a lot of crap.” That aside, he is clearly pretty troubled.

Even though I doubted the veracity of the story, I decided to take it at face value in order to talk to people on the front lines–actual abortion providers–about what really goes on in a clinic when a woman is ambivalent. The professionals I talked to were quick to recognize that anyone who would conduct a poll to make such a serious life-altering decision is surely in need of some mental health counseling.

I would add about the supposed pollster that this behavior is no indicator that these two are responsible adults, let alone suitable parent material. If someone was so willing to put such an important decision in the hands of an anonymous and unverifiable mob, then how would they make other life decisions that would affect a child? With a Magic 8 Ball, Ouija board, coin toss or maybe more polls? Given this evidence we’ve been presented from a couple who may or may not exist, an argument could be made that, in the best interests of all concerned, abortion might not be a bad idea.

But that’s not my choice to make.

Screenshot from Birth Or Not