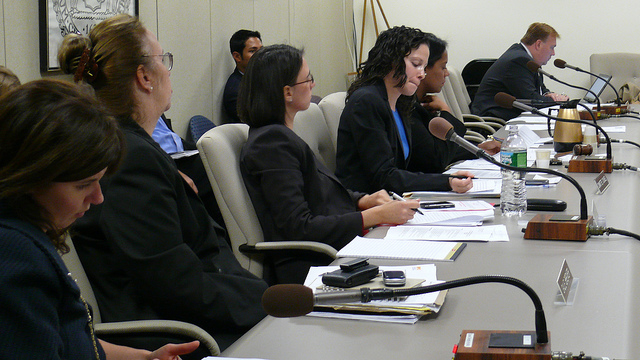 The debate during last week’s New York City Council hearing on a recently introduced bill aimed at regulating the city’s crisis pregnancy centers (CPCs) was heated, to say the least. The proposed legislation would require some two-dozen CPCs—or, as council member Jessica Lappin put it, “anti-choice centers masquerading as health clinics”—to post signs disclosing if they don’t have medical staff on site; disclose in offices, in advertising and on websites that they don’t offer abortions or FDA-approved birth control; and require that any information provided by clients to staff be treated as confidential.

“This is about truth in advertising and women’s health,” said Lappin. More than 50 pro- and anti-choice advocates—including representatives from the city’s Department of Mental Health and Hygiene, Planned Parenthood, Concerned Clergy for Choice and staff from CPCs from around the city—testified to a packed room well into the evening. And while the usual suspects turned out to lambaste abortion and trumpet its “psychological and emotional complications” and its alleged links to various cancers, the hearing saw interesting exchanges on the bill’s focus on disclosure and truth in advertising.

One particularly salient point that arose was that of the deception on the part of crisis pregnancy centers, which often pass themselves off as clinics with licensed medical staff. Lappin stated that:

While the staff or volunteers at the center have the right to say whatever they chose to pregnant women, they should make clear that they are not doctors, nurses or midwives. If they aren’t licensed to give prenatal care, they should say so. Women should know up front, before or as they walk in the door, if these offices don’t offer information or access to abortion or birth control.

Lappin then cited the dangerous costs of being misled by CPCs’ delay tactics, which can keep women from receiving sound prenatal care or access to an abortion.

Fran Freedman, deputy commissioner for external affairs for the Dept. of Consumer Affairs, said that from her department’s perspective,

Fair dealings with potential clients center around one very simple but very powerful precept: transparency. Businesses must be clear about their offers so customers can make informed decisions about whether they choose to accept them, particularly when consumers find themselves in disempowered positions such as an unintended pregnancy.

She added that “enforcing this transparency falls squarely within the purvey of government regulation.”

From the anti-abortion side, CeCe Heil, senior counsel with the Christian anti-abortion group American Center for Law and Justice, blasted the bill for operating on the “unspoken assumption that women are incompetent; we are not able to understand that ‘abortion alternatives’ actually means ‘alternatives to abortion.’” Along those lines, council member Daniel Halloran asked NARAL Pro-Choice NYC’s President Kelli Conlin whether she thinks a woman could be deceived by the names Sisters To Life, Bridge To Life or Maternity Birth Care Services, thinking that they provided abortion services. Said Conlin:

I actually do believe that someone could be deceived, Council member, because I think that you and I are fully versed in all of the jargon, language, propaganda of the various movements—ours included—but I assume that you can’t make the assumption that every teenager in New York and every young woman in New York has the same level of knowledge about those terms.

Various testimonies also spoke to populations of women who are particularly vulnerable to CPCs’ deceptive tactics, such as low-income women with low health literacy and non-native English speakers. Balin Anderson, a social worker at Planned Parenthood in the South Bronx said,

I think that these centers are particularly coercive because they prey on someone’s lack of health literacy, lack of access to care. … These people are very desperate, especially if it’s a young woman experiencing an unwanted pregnancy, maybe she’s in an abusive relationship …. these women are in crisis …  and [then] they see a sign ‘free pregnancy test’ [when] they need to confirm a pregnancy. And that’s what draws them in [to the CPC].

Latinas face a unique and complex array of reproductive health and rights issues that are exacerbated by poverty, gender, racial and ethnic discrimination and xenophobia. These circumstances make it especially difficult for Latinas to access reproductive health care services. … This legislation will be particularly helpful for immigrant women, who are particularly vulnerable as they learn to navigate the network of low-cost care in the United States.”

Council member Halloran tried to categorize the proposed bill as something that would take away free speech rights:

But when he pushed Donna Lieberman, executive director of the NYCLU—an ardent protector of First Amendment Rights—to admit that the bill might have a chilling effect on speech, she responded instead:

Neither the right to choose nor the right to free speech is absolute. And often as a society we are faced with rights in conflict and what the courts have done and what we propose is crafting this legislation so that it minimizes the burden on both, maximizes the protection for both and that’s highly doable. … Crisis pregnancy centers are entitled to their views, they are entitled to prostheletyze their views, they are entitled to counsel about their views. …[But] we ought to be able to require facilities that hold themselves out as a medical facility to let people know, hey this is not a medical facility.”

The council has not yet voted on the bill.

Photo from the NYC hearing from Flickr.com user WeNews through Creative Commons License 2.0