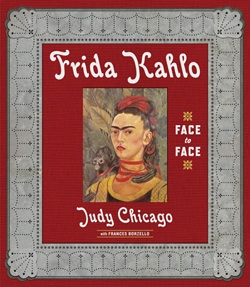 Feminist artist Judy Chicago, known best for her iconic work, The Dinner Party, recently released the book Frida Kahlo: Face to Face, coauthored with art historian Frances Borzello, in which the two converse over a selection of the esteemed Mexican artist’s work. The well-illustrated volume explores Frida Kahlo as a woman and an artist, as well as Chicago’s identification with her predecessor’s work.

I recently spoke by phone with Chicago, who lives in New Mexico.

When did you first encounter Frida Kahlo’s work?

JUDY CHICAGO: In the early 1970s, when I was doing my research on women’s history, art and literature, Kahlo wasn’t very well known. It is hard to imagine for somebody brought up with “Fridamania,” but she wasn’t. I think the first exhibition I saw of hers was at the Grey Art Gallery in New York City. Even after she was discovered by the feminist art movement, her whole body of work was a long way from being seen. Even now, although there have been so many books about her, there has never been a systematic analysis of her themes and her subject matter. I’m hoping what Frances [Borzello] and I have done will make a contribution to a better understanding of Kahlo’s overall body of work. … There has been no looking at her work in relationship to other women artists.

Why do you think Kahlo became so iconic within the feminist movement?

I think there have been successive waves of interest. The first were among women: Her story appealed to women, her images appealed to women. In the second wave, in the Chicano and Hispanic movements, her interest and valorization of Mexican culture appealed to people who were claiming their heritage, just like women were claiming our heritage. Then the third wave was among gay and lesbians because of her shifting gender [roles] and open sexuality. That all coalesced, of course, when … the film came out, and she was propelled into the stratosphere.

You draw many parallels between yourself and Kahlo–did you always know that you had things in common?

That was actually a discovery I made. When I started out I didn’t think I had anything in common with her. Our identification with our fathers, our use of color and our love of and representation of animals–I think those are the three major areas that we have in common.

Why did you think you did not have anything in common?

Because our lives were so different. She put up with Diego Rivera’s philandering, which I never would have done. Her production was small, mine is prodigious. Her painting took second place to her relationship, which has never been the case in my life. So ostensibly there didn’t seem to be a lot of similarities, but then I found there were some that I had not anticipated.

What drew you to this project?

I was interested in trying to do something for her that I don’t think is done enough for women artists, myself included, which is looking at our overall body of work. I was interested in trying to see if we could approach Kahlo’s work without constant reference to her biography, which I found annoying. I find a lot of the imagery very, very powerful. Those are the things I was most focused on: looking at the imagery, understanding her work in a larger context and creating a new context in which to see her work.

Do you think the feminist idea of the “personal is political” can function in art?

It actually has limited usefulness in terms of understanding art. In order to make art that communicates or is meaningful, you actually have to transform the personal into the universal. If you only translate it into the political it becomes time-bound, and when that political period is over so is your art. One of the things that I’ve always attempted to do in my work is to deal with subjects that have universal meaning, even if they come out of personal experience and I think that one of the things that is sort of startling about a lot of Kahlo’s images is that she is able to transform what was intensely personal into universal statements. Hence her image, for example, of The Broken Column, which  is very much about her accident and her unrelenting pain and the rods that were inserted into her spine. But that pales because it becomes an image of universal suffering and transcending illness. The idea of coming to consciousness thorough realizing the personal is political is one thing, but that is not what art is about; art is about transcending the personal.

Do you see an improvement in the representation of women artists today?

Women can be themselves and do their work as women, which was not possible when I was young. That’s true of artists of color also, and gay and lesbian artists. That is to be celebrated, and there are many more women showing, but, as I point out in the Kahlo book, appearances are deceptive. This is not the first time in history that women have come forward; women artists have had opportunities only to have pushback. Sadly, the institutional change has lagged very far behind both consciousness change and the numbers of women working.

Can we see this lack of institutional change as representative of women’s status generally?

I would say what we see in the art institutions is a reflection of political [power]. I mean, look at the pushback against Nancy Pelosi. I think there has not been a lot of conversation about the fact that a lot of the push back we saw in this election was white men, older white men, pushing back against the idea of leadership in the hands of people of color and women. And that’s the same thing you see [in the art world]–there are a lot more women showing, but institutionally there has been very little change over 40 years of activism. If you go to most major art institutions you still see the same white, male Eurocentric narrative. If you look at the history books, history is still taught primarily from a very particular perspective and it’s a very male perspective. What men did was important and there are a few women thrown in. That’s not enough.

For more information on Judy Chicago’s various art projects, upcoming exhibitions and the K-12 curriculum she created for The Dinner Party, check out  Through The Flower. A 40-year survey of her work can be seen through this coming Saturday, December 4, at the ACA Gallery in New York.