Burlesque Is So Gay. And That's A Good Thing. - Ms. Magazine
Skip to content 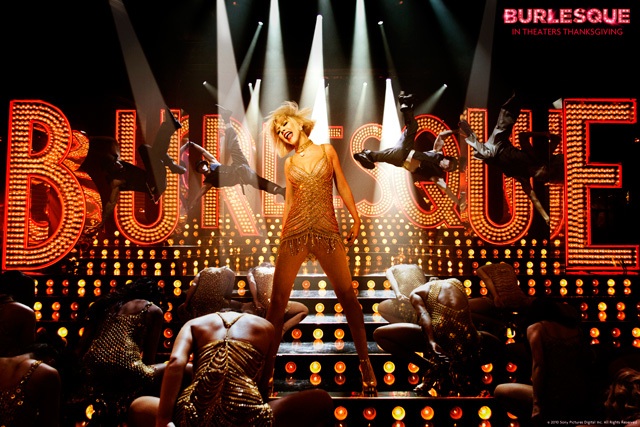 When I worked as a strip club waitress, part of my job was to look out for troublemakers: people entering the club with an intention to harm the dancers. OK, it wasn’t officially my job (that was up to the managers and bouncers), but as a feminist, an ally, and also friend to some of the dancers, I felt it was my unquestionable duty. The worst of the troublemakers? Undercover cops–guys who would enjoy a lap dance and then slap their pleasure provider with a ticket for indecency.

Now, more than 10 years later, as a tenured professor, my job has expanded to analyzing sexual-social systems and all forms of sexual policing. This is why I’m interested in not just Burlesque itself, the new musical film starring Cher and Christina Aguilera, but also the film’s sociocultural context, including the chorus of negative reviews.

Even before Burlesque’s Thanksgiving release, reviewers were sharpening their knives, eager for a kill. Not since the mid-90s releases of Showgirls and Striptease—both of which were given Golden Raspberry Awards for the worst in cinema–have reviewers been so eager to tear a movie and its (sexually unapologetic, dancing, woman) protagonist to shreds.

Post-release, most reviewers have followed a standard formula: Compare Burlesque to Showgirls; make fun of Christina Aguilera; declare the film a miserable failure. Below is a sampling:

There’s nary a surprise to be had, except for Aguilera’s apparent misconception that she has acting talent.

• Catherine Shoard’s review in the Guardian concludes “Two divas, one stage – you do the maths,” with the apparent assumption that no stage, or film, is big enough to fit more than ONE larger-than-life female (and unapologetically sexual) protagonist.

• Mary Pols’ review in Time judges Aguilera not against her co-star, but against other women who have played similar roles:

Aguilera, making her dramatic debut, is far from a great actress, but compared to Elizabeth Berkley [Showgirls] or Spears [Crossroads], she is a veritable Nicole Kidman [Moulin Rouge].

(Note that of the three films, only Moulin Rouge, which ends with the death of the prostitute/dancer protagonist, is implied to be “good.”)

• Finally, Michael Phillips of the Chicago Tribune ridicules not just the plot and the acting, but delivers the final cut: “The whole movie amounts to an I-will-survive anthem.” A curious denigration, as Gloria Gaynor’s mega-hit single “I Will Survive” is a recognized anthem for the women’s movement, the gay movement and HIV/AIDS survival.

With these critiques in mind, I took my partner and brother-in-law to see Burlesque on Thanksgiving weekend. Burlesque has a familiar plot for US audiences, full of underdog themes: A sweet, talented small-town protagonist moves to Hollywood to pursue her dreams. She faces initial hardships (can’t get a job as a singer or dancer), but her path is altered when she meets an intriguing character (in this case the character is a place, a magical neo-Burlesque theater). The protagonist meets opposition from the theater’s boss (Cher) and a rival performer, but through her determination and raw talent works her way into a top singing/dancing position.

Our immediate reaction? Pure, easy pleasure. Burlesque is a light, sometimes cheesy, visually gorgeous, sexually tame, feel-good film. A perfect Disneyland-for-Adults distraction for the Holidays. Cher and Aguilera have the kind of voices that make your hair raise, out of not horror but out of delight. Technically, it gets right some elements of both classic burlesque and the neo-burlesque scene, but it’s also a montage of styles borrowed from American Idol, Pussycat Dolls, and Las Vegas showgirls. Worthy of an Oscar? I’ll leave that up to the Academy of Motion Picture Arts and Science–but I won’t be surprised if costume design is in the running.

What then accounts for the cutting reviews of Burlesque and Aguilera? What grand community or artistic standards does this film, or Aguilera, violate? Is there really no place for a fluffy, feel-good, aesthetically pleasing film during the holidays?

Then again, maybe I’m a bad film cop, and Aguilera is just an irredeemable actress, deserving of that ticket for indecency. At least her voice isn’t in question; perhaps her policers would ease up if she simply became the voice of a cartoon character, like the Rapunzel figure in Disney’s new holiday film, Tangled. As it turns out, Burlesque and Tangled have much in common: both were light musical romances released around Thanksgiving, both feature pretty, young, blonde, female protagonists and tall, dark-haired mother figures. Indeed, reviewers like Marshall Fine (who could barely spit out his disdain for Aguilera in Burlesque) seem quite taken by the “tale of the girl in the tower with the long, loooong hair.” According to Fine: “Disney’s new film manages to be romantic, musical, moving–and outstandingly funny. Don’t skip it.”

There is an intriguing similarity between Marshall’s enthusiasm for Tangled and reviews of Burlesque coming from gay or gay-friendly sources. Sara Michelle Fetters from Seattle Gay News writes:

But just because there are no surprises doesn’t mean there isn’t plenty of cheesy cornball fun to be had by watching Burlesque. Aguilera is fairly charming as the star-struck ingénue, while Cher and Tucci (playing the requisite Gay best friend with an answer for everything) could do this sort of thing in their sleep and make it somehow worthwhile. Despite my best efforts to the contrary, I never felt terrible about sitting in my theater seat. Heck, most of the time I was reasonably entertained, going along with the flow even if every fiber of my being told me not to.

Mick LaSalle, writing for SF Gate, is unabashedly enthusiastic about the film:

Burlesque is irresistible from its first minutes, and over time it creates a whole atmosphere, not only onscreen but within the audience. It’s big, perfectly cast and entertaining in every way, but more than that it feels like a generous public event. See it with other people. See it with a crowd.

Much more can be said about the film’s web of inside jokes and gay cultural references and the fact that Cher and director Steve Antin were (at different times) long-time lovers with media powerhouse David Geffen.

But ultimately, here is where Burlesque goes “wrong”: While trashed for being too predictable, it is actually not predictable enough. Unlike most other contemporary Hollywood (fictional) films about sexual, dancing women, our protagonist is a “good girl” who is sexually expressive but suffers no negative consequences. She is not forced to choose between innocence and sensuality, good girl and vamp. She, and everyone else at the club, gets to have it all. The club is not a hotbed of despair, corruption, and exploitation. The tall dark mother figure, a sexy burlesque dancer herself, is not a villain. Rather, as a club owner she is fiercely loyal to her employees; her club is their family. Women employees ultimately stick together, survive and thrive. Gay employees are loved and integral to the club. No one dies.

I have a strong suspicion that it is all of this–more than the soft dramatic tension and cheesy lines–that most mainstream film reviewers really can’t stomach.