Hanukkah has come early this year, and the National Council of Jewish Women is doing more than lighting the menorah and exchanging presents.

Using the Festival of Lights as a deeper symbol, the group has set up special Hanukkah e-cards on their site, inviting people:

Be the shamash (the candle that lights the others) by inviting eight others to join you in taking action to support women’s economic security and end domestic violence by sending a Hanukkah e-card!

These are more than the average e-cards sent to friends and family. Yes, they wish recipients a happy Hanukkah and can come with a picture of dreidels, wrapped gifts or a menorah, but they also invite you to sign a letter to President Obama that asks him to,

Reassert your commitment to ending domestic violence. In 2011, we will need your passionate leadership even more to respond to the economic needs of women and families and reauthorize the Violence Against Women Act. Please use all the powers of the presidency to eliminate domestic violence.

Nancy Ratzan, president of NCJW, says they’ve had holiday e-cards before, but not like this. Along with getting more people involved with women’s rights, Ratzan would love for it to influence the administration.

And though it is a Jewish organization, NCJW aims to help all women (and through that, all people) by such acts as fighting to end abuse and strengthening reproductive rights. Certainly working for women’s empowerment is a job that goes on all year, but Ratzan finds a special significance for it during the holidays.

The symbolism of inviting eight friends for the eight nights of Hanukkah is purposeful, and the use of the shamash is symbolic. It’s the shamash, the service candle, that is first lit and used to light the remaining candles night by night. A woman—or man—can be their own metaphorical shamash, lighting up their friends with goals of progress.

Says Ratzan: “This time of year is a very meaningful and valuable time to give back in a variety of ways, to make a nation and a world we dream about.” 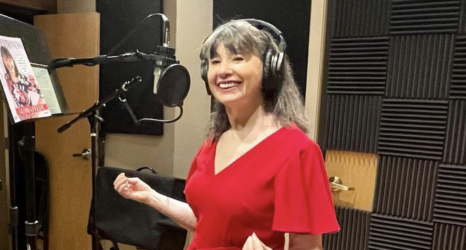