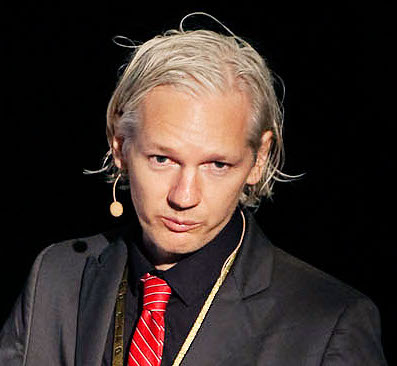 Julian Assange, WikiLeaks founder, has been under global siege for leaking sensitive government cables. What may take him down, though, is his alleged reluctance to prevent his own personal leaks by using a condom. Interpol issued a red notice, which means he is wanted by a national jurisdiction–in this case Sweden–not for his document dump but because two women alleged that he refused to use a condom, or withdrew after a condom broke.

It’s reported that both women asked him separately to take a test for STDs, and when he refused they went to the police, who considered his actions a sex crime under Swedish law. One woman was “especially anxious about the possibility of HIV and pregnancy,” according to the Daily Mail.

Assange’s “Condomgate” came on the heels of the Pope’s sudden embrace of condom use. Usually I would side with a secret leaker and oppose anything the Pope says, but this turn of events confuses my moral compass. The Pope’s prevention pirouette came just before World AIDS Day on December 1, and obviously he’s finally figured out what the rest of us have long known–that condom use is one of the most effective ways to prevent  the spread of AIDS and other sexually transmitted diseases.

All this news about condoms made me think about the humble device. Its use as a contraceptive goes back centuries yet it’s still the subject of misinformation, derision and male resistance to anything they perceive as interfering with their impulsive pleasure. Revelations about Assange’s insistence on uncovered assignations, if true, reflect the continuing disregard for women across the political spectrum. He may be a champion of free speech, but when a woman speaks up he ignores her.

Maybe it’s because of its easy accessibility that we tend to pay less attention to condoms than medicalized contraceptives. Condoms are actually very effective contraceptives and, as the Pope realized, they have the added benefit of preventing the transmission of AIDS and most other sexually transmitted infections. They’re safe, inexpensive, readily available and you don’t need a prescription to buy them.

If condoms are always used correctly, 2 out of 100 women will get pregnant each year; in other words, they’re approximately 98 percent effective. There are latex-free condoms for people with latex allergies, so there’s no allergy excuse.

Condoms have other benefits as well: They can help relieve premature ejaculation, may help a man stay erect longer and can be incorporated as part of sex play. There are no side effects, unlike many other forms of contraception, and they make men partners in prevention of pregnancy and infection.

But, they don’t work at all if someone refuses to use one. Assange may be a hero to some for disseminating secrets, but if what the two Swedish women have said is true he may have caused real harm to them and any other women he’s had sex with since.

It’s an upside-down universe when I’m agreeing with the Pope and not siding completely with a whistleblower’s actions. In this instance, Assange faces not a government cover-up but his own failure to cover up.

UPDATE: Assange was arrested on December 7 in London on the Swedish extradition warrant and denied bail.