Why Hasn't the Bigelow Effect Carried Over? - Ms. Magazine
Skip to content 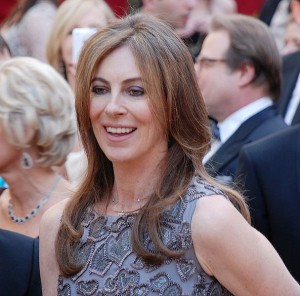 In between the was-he-funny-or-was-he-crass hoopla over Ricky Gervais hosting the Golden Globes the other night, did you notice that the director of the Best Foreign Film (Denmark’s In a Better World) was a woman (second-time nominee Susanne Bier)?

Bier’s film may also get an Oscar nomination–we’ll find out on January 25–and she may not be alone among women directors of foreign film nominees. In fact, 10 of the films that the 66 countries submitting official entries for Oscar consideration this year were helmed by women, including Feo Aladag’s When We Leave.

That’s only surprising considering how male-dominated the Oscars have been in the directing category for U.S. films. Katheryn Bigelow finally broke through the brick wall of directorial misogyny last year by winning the best director award for The Hurt Locker, but before that there were only three other women nominees: Lina Wertmuller for Seven Beauties in 1975, Jane Campion for The Piano in 1993 and Sofia Coppola for Lost in Translation in 2003. Coppola was the first American to be nominated. Assuming five nominations a year, women make up less than 1% of all directors nominated in the history of the Academy Awards.

On the other hand, there have been 17 films directed by women among the nominees for Best Foreign Film (for which there is no separate director’s award):

That’s only 6 percent of all nominations. Of those, two have won: Gorris’s Antonia’s Line won the Oscar in 1995, and Link’s Nowhere in Africa won in 2002. Antonia’s Line was a particular feminist favorite, both because of the director’s forthright feminist (and lesbian) politics and the matriarchal theme of the film.

This year, prognostications suggest that there won’t be any women nominated as Best Director, since no women directors were nominated by the Director’s Guild of America for their annual award–despite the fact that Lisa Cholodenko’s The Kids Are All Right and Debra Granik’s Winter’s Bone are considered to be among the year’s best films (The Kids Are All Right won the Golden Globe for Best Comedy). To be fair, though, the highly respected Coen Brothers of True Grit and Danny Boyle of 127 Hours were stiffed by the DGA as well.

Just because women don’t get nominated doesn’t mean they’re not producing award-worthy work, of course. Check out this comprehensive Metacritic ranking of the “Best Women Film Directors (and Their Films),” which drives home the point that women directors are too-rarely recognized at the prestigious Cannes Film Festival, let alone at the Academy Awards, but their lack of honors does not correlate to a lack of quality. In fact, writer Jason Dietz notes that two of last summer’s most critically praised U.S. films were the aforementioned Winter’s Bone and The Kids Are All Right. And many of us can recall other terrific women-directed features of the past year (on my list is Nicole Holofcener’s Please Give and Lena Dunham’s Tiny Furniture).

Nonetheless, women directors still don’t receive enough opportunities to direct big-budget films. Research by the Center for the Study of Women in Television & Film at San Diego State University in California showed that, in 2009, women accounted for just 7 percent of directors for the top 250 domestic grossing films–a drop of 2 percent since the previous year but within the same steady range of the past 25 years. As James Brown would say, Kathryn Bigelow notwithstanding, this is a man’s world.

We can do our part as movie viewers to help raise this pitifully low rate. If a film comes out that’s directed by a woman, make a point to see it in a theater. If you’re an Academy member, vote for women directors. Wouldn’t it be amazing if, one day, the preponderance of Oscar-nominated films were directed by women?