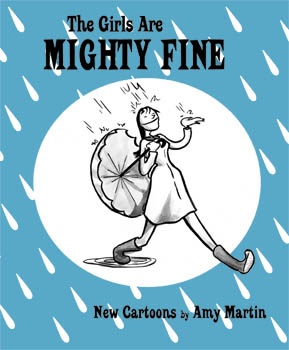 Amy Martin’s cartoons are like a heavily inked mirage of what Sex and the City should have been and almost once was: non-vomitous. Martin’s women do the same as the SATC gals–they drink cocktails, wear heels, mope in front of their laptops and lust after partners who don’t return their calls. However, this time it’s like SATC has been boiled down to a divine essence where all of the flashy consumption and bad writing has been skimmed off, leaving a ferocious crew of women who understand friendship, enjoy sex and are working the rest out.

The Girls Are Mighty Fine is the title of Martin’s newest collection, following The Single Girls, and Bachelor Girl’s Mother Goose. They are indeed fine and idiosyncratic and make the reader happy to see beautiful women picking their teeth, watching sitcoms on their computers, bleeding through their skirts, aching, reaching, fumbling and ultimately celebrating.

There is a lot of joy here, and Martin’s insights are on the mark. She doesn’t sell out female friendship by damning it to treacly scenes of kitchen sing-a-longs and hugs. It is complicated and weird and at times fluffy, but the strength it admits to is such a nice thing to find in a book. Several times while reading her work I thought, “This is just right.”

Martin gets personal; she writes about a break with her family, includes scenes from her job as a children’s librarian, and I am pretty sure she draws her butt true to size. There is a ferocity in the artwork and quick jokes. The lines of the smiles, shoes and hands make the characters sometimes elfin, other times wolfish. Things are curly and sharp in the same moment. I feel strong and giddy when I read this stuff, which is a hard combination to pull off. Yes, these ladies love to drink Lemon Drops and wear great shoes, but Martin’s protagonists aren’t gloss–they are the shiny part of a modern life. They are grand dames with large appetites, but still real enough to worry if they look stupid when wearing a head scarf out in the rain. Martin’s women totter: While they act fiercely, it isn’t automatic, though any doubts usually end in the lyrical, or in the ribald refrain “Fuck ’em.”

I wish there were more moments looking at how women take on the world (as in a charming recent piece on her website, in which Martin offers an ode to a woman who famously got a street harasser arrested) and how they savor the raucous pleasure of friends, and less on the agonies of men who don’t call back or stick around. My favorite moments in the book are the small manifestos and the upright defiance and fashion of the girls. I love that they ask for everything, write in their own blood and also like to knit.