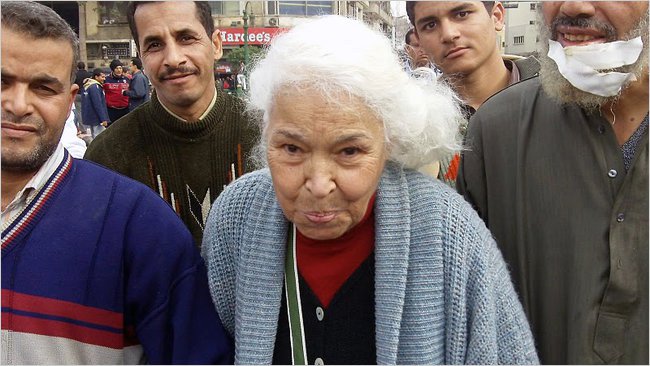 [This English language version is a Women’s Media Center exclusive.]

Now, almost age 80, I have lived to witness and participate in the Egyptian Revolution of January 25, 2011.

I am writing this Sunday morning, February 6. For 12 days and nights now, millions of Egyptian women and men, Muslims and Christians, people of all ideologies and beliefs–the Egyptian people—have continued to unite under the banner of spontaneous popular revolution. They unite against the existing corrupt, tyrannical system, rotten from the head to the feet of the modern Pharaoh. His throne is sticky with the blood of the people, as his ruling party releases thugs to kill the young and Parliament’s deputies forge fake laws, while trading in land and women, drugs and bribes. His so-called educated elite long ago sold its pens and conscience, misleading public opinion, all for the interests of positions in government, large or small.

But this revolution has launched young women, men and even children from their homes, driving them forward, protecting each other. So the old order is falling, and with it falls what the police call “security,” and with it falls the elite controlling information and culture, and with it falls the self-appointed “Committee of the Wise Men” who are linked to wealth and power. And party leaders, even those in so-called opposition who nevertheless opportunistically supported the regime covertly and overtly for more than half a century, all are falling.

These were the forces that wreaked chaos under the name of security, dictatorship under the name of democracy, poverty and unemployment under  the name of development and prosperity, prostitution and harassment and misogyny under the name of freedom of choice or tradition, and subordination and servile colonialism under the name of partnership and friendship or the peace process. They imprisoned women like myself, owners of voices and pens, trying to silence us inside their cells, or isolate us and distort our reputation, or expel us to exile outside and inside The Homeland.

But this time is different. This time there poured forth millions of men and women, to the streets of all the provinces, all the villages and cities, from Aswan to Alexandria, Suez, Port Said, every inch of the homeland. In the capital, Cairo, shines the field of liberation, Tahrir (which means Liberation) Square–our land, our camp. It is a tent city over asphalt, and inside the tents one bloc solid of human beings.

We do not leave our place even when attacked last Wednesday, February 2, by police disguised in civilian clothes who broke into our field–gangs hired by the regime, taking  bribes. Gunmen with all kinds of weapons riding horses and camels came thundering at us. I was sitting in the square talking with young people, and I saw with my own eyes the barbarism, riders in the field, fire everywhere, dust and smoke covering the ground. I saw fireballs flying in the air, and young women and men drop down and bleed.

Yet the Egyptian people’s dovish calls for freedom, dignity and justice persisted, and the Defense Committee of Revolutionary Youth was able to triumph over the thugs and even arrest some of the bribe-takers with all their identity cards–including state security officers, trustees of police. Some of them have no work, some of them admitted taking 200 pounds and being promised 5,000 pounds if they dispersed the people in the field and showered Molotov cocktails down on us.

Still, it goes on. Young people set up the tents for rest a few hours at night,  so the mothers of infants and their children would no longer be on the ground in the cold and the rain. Hundreds of young girls walk free, chanting—and not one has been sexually harassed or molested. The chants are for freedom, dignity and equality–and many are led by women—with men following. Coptic Christians are side by side with Muslims. Even some of the youth of the Muslim Brotherhood told me, “We disagree with some your writings but love you because you did not change opportunistically, you have been consistent.”  Another young man came to embrace me and say, “Oh Nawal, we are the new generations who read your books. I did and was guided by creativity and rebellion and the revolution of your thoughts.”

Swallowing  tears, I said to them, “This Eid [festival] is to us all the festival of freedom, dignity, creativity, rebellion and the revolution.”

A young woman called Rania said, “We call for a new constitution that does not distinguish between people on the basis of religion, sex or creed, race or other.” A young Christian named Boutros added,”We want a uniform civil code of personal status for all people without distinction as to religion, sex or sect.” A young man called Tariq  told me, “We who made the revolution have to choose our transitional government and a national commission to change the constitution.” Another, named Mohammad Amin, cried, “We want a solution to the People’s Assembly and Shura Council and the work of fair elections to choose a new president and boards of a new popularity.” Yet another, named Jalal, said,”We are a popular revolution for a new social contract, we want to select the transitional government and to choose the National Committee, which can change the constitution.  We do not want the new-formed Committee of the Elders of the Revolution imposing their ideas on us. They are opportunists who did not participate here with us, suffer here with us. They arrive now from Europe or America, Egyptians who have lived their lives outside the homeland, come now to assume the leadership of the revolution. To them we say: ‘We lead the revolution, having among us our own “Elders” of young people aged 30 or 40 or 50 years; we have specialists in all scientific, political, economic and other fields.’” And a young man named Mohammed said, “I feel proud for the first time in my life because I am an Egyptian. Some of us were killed, but we turned the defeat into victory, paying the price of freedom with the blood of our martyrs. There is no force that can bring us back to back. Never.”

I live with these young men and women day and night, watching as they form committees to take on the work of daily cleaning the field to the transfer of the injured to hospital, to the provision of food and medicines, to defending the field and responding to the regime’s lies in the media, to the nomination of names for the transitional government.

We are one people.  Everyone calls for the departure of Mubarak and his men in the Party and the government, calls for an end to the bloodshed like that last Wednesday, and an end to corruption, tyranny and over 30 years of entrenched governance, and calls for a chance to speak the rest of our reality out loud to the world.

Nawal El Saadawi is a leading Egyptian feminist, author and medical doctor, whose 1979 book, The Hidden Faces of Eve, explored such issues as female genital mutilation, Islamic fundamentalism and oppressive marriage and divorce laws. She has been called the Simone de Beauvoir of Egypt. In 1982 she founded the Arab Women’s Solidarity Association to promote women’s active participation in social, economic, cultural and political life; the NGO was later banned by Egyptian president Hosni Mubarak. Among dozens of books, both fiction and nonfiction, she wrote Memoirs from the Women’s Prison in 1983 on her imprisonment after opposing the Anwar al-Sadat regime—a result, she said, of believing his pledge of democracy: “So I started criticizing his policy and I landed in jail.” Now almost 80, she continues her activism, most recently in the anti-government demonstrations in Tahrir Square.

Photo of El Saadawi in Tahrir Square by Leil-Zahra Mortada; the photographer began collecting and posting photos on Facebook of women among the anti-government protesters when she did not see them adequately represented in early media coverage.

El Saadawi’s words are translated and edited by Robin Morgan. This piece will be cross-posted at The Women’s Media Center.