Gendering Poetry for the Next Generation - Ms. Magazine
Skip to content 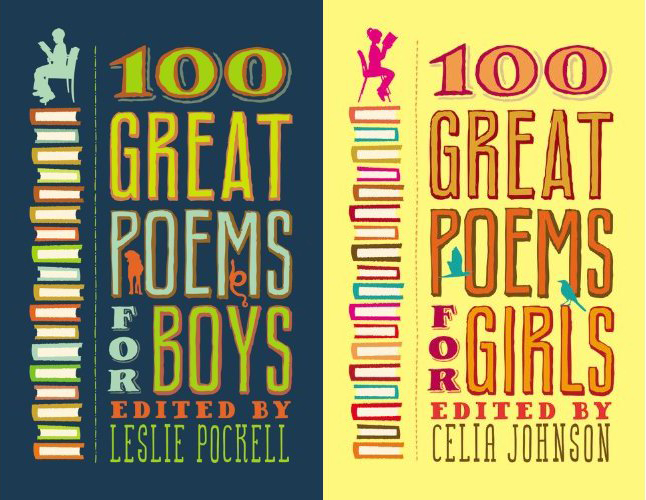 Valentine’s. Whether you spend the corporate holiday canoodling with your significant other or ranting on Twitter about how you don’t need a holiday to tell you how to love, odds are pretty good that you’ll run across some poetry along the way. Now, poetry can range anywhere from Emily Dickinson to a Hallmark greeting to a Kanye West tweet, but did you ever think that poetry itself had a gender?

Grand Central Publishing does. In  April, the company will put forth 100 Great Poems for Boys (by Leslie Pockell–he’s a dude) and 100 Great Poems for Girls (by Celia Johnson). Yes, two separate books. The point of this segregation, as noted in the press release, is that:

Boys and girls of all ages will enjoy reading poems catered specifically to them, whether it means envisioning adventures with princesses and witches, or discovering great heroes and dangerous animals.

The book for boys, in addition to featuring heroes rather than witches, is about 50 pages longer than the girls’ book. Since there are 100 poems in both books, I’m not sure what statement they are making about boys being drawn to things with longer lengths—though it is certainly worth noting.

The poems themselves aren’t originals: They’re classics from the likes of Walt Whitman, Edgar Allen Poe, Robert Frost, Emily Dickinson and Emily Brontë. They’re mostly written by male poets (or “Anonymous”), though–even in the girls’ book, where there are only 11 women poets (and just four women in the boys’ book).

Sample boys’ poems  are about battlefields and heroes (“Paul Revere’s Ride” by Henry Wadsworth Longfellow and “Old Ironsides” by Oliver Wendell Holmes) or those “dangerous” animals (“The Tyger” by William Blake and “The Raven” by Edgar Allan Poe). Girls, on the other hand, are directed toward nature (“The Daffodils” by William Wordsworth and “A Girl’s Garden” by Robert Frost) and imagination (“The Lady of Shalott” by Alfred, Lord Tennyson and “Song of the Witches” by William Shakespeare).

Straight away it’s easy to see where the sorting problem lies: These aren’t poets you can just split between boys and girls. They’re universal, which is why they’re called classics. One of the Ms. Blog editors pointed out how many of the “boys'” poems she remembers reading and loving when she was a girl. I was particularly bothered by the books’ introductions.

You don’t have to be a special age to be a boy. It’s more a state of mind than anything else (even certain girls can qualify, if they have the right attitude!).

The poems I remember most vividly as a little girl were the ones that we would chant as we sat in a circle and clapped our hands.

Didn’t boys ever chant in a circle and clap hands? And if girls can qualify as boys with the “right attitude,” can boys qualify as girls as well? Or is that just too gender-queering for comfort?

Rather than exposing all children to a wide range of literature, these books confine poets and “types” of poems to just half the human race. How unnecessary. This gendering of products is nothing new, of course, and has consequences, as Emily Rosenbaum  pointed out in “Gendering Toys is Good for Nobody:”

What the children do learn is strict gender norms, and the children who don’t adhere to those norms frighten their peers.

Both books offer a solid collection of poems and are good jumping-on points for anyone interested in getting more acquainted with classic poetry. But why not combine them as 200 Great Poems [although there’s a small crossover] for Boys and Girls? Marketing, you say? Instead, boys and girls can only read the opposite-gender poetry at the risk of “frightening” their peers. A sad thought for Valentine’s Day.