CPAC and GOProud: Can Gay Rights Edge into the Conservative Movement? - Ms. Magazine
Skip to content 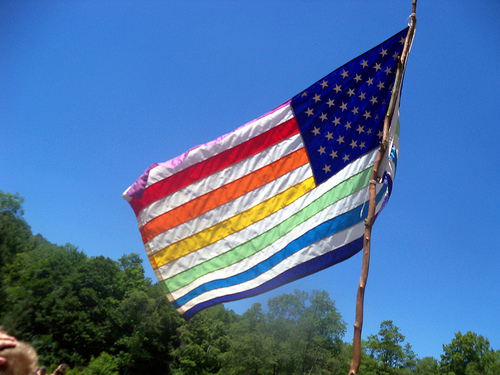 If you’re not a political junkie, you probably breezed over news about the American Conservative Union’s Conservative Political Action Conference (CPAC) that took place over the weekend in Washington, D.C. With an agenda [PDF] that listed more that 30 high-profile speakers and a score of panels on topics ranging from “How Political Correctness is Harming America’s Military” to “Cutting Spending by the Spenders,” CPAC provided a mass of information on the state of the conservative movement, and was worthy of attention if only to know what progressives are up against.

What garnered the most attention before CPAC opened this year was its cosponsorship by GOProud–a group that represents conservative gays, lesbians, transgender people and their allies. The group focuses on individual liberty and limited government–like most Republicans–but also supports repealing Don’t Ask, Don’t Tell and opposes a Federal amendment defining marriage. GOProud was the first gay rights organization to release a campaign commercial against Democratic candidates.

Due to GOProud’s sponsorship, social conservative groups like the Heritage Foundation and the Family Research Council boycotted the conference. The Media Research Council’s president Brent Bozell announced his organization’s boycott in January, saying:

We’ve been there 25 years, since our inception. To bring in a ‘gay’ group is a direct attack on social conservatives, and I can’t participate in that.

Other groups protesting the conference included Concerned Women for America and Jerry Falwell’s Liberty University. Senator Jim DeMint of South Carolina declined his invitation to attend. Sarah Palin, though, tried to stake out a safe middle ground. In an interview with CBN News that aired on February 7, Palin said in her usual fractured diction:

Well, I’ve never attended a CPAC conference ever so I was a little taken aback this go around when I couldn’t make it to this one either and then there was a speculation well I either agree or disagree with some of the groups or issues that CPAC is discussing. It really is a matter of time for me.

But when it comes to …  perhaps what it is that you’re suggesting in the question is should the GOP, should conservatives not reach out to others, not participate in events or forums that perhaps arising within those forums are issues that maybe we don’t personally agree with? And I say no.

It’s like you being on a panel shoot, with a bunch of the liberal folks whom you have been on and you provide good information and balance, and you allow for healthy debate, which is needed in order for people to gather information and make up their own minds about issues. I look at participation in an event like CPAC or any other event along kind of in that same vein as the more information that people have the better.

This, albeit weak, support of at least a balanced discussion is shocking coming from Palin. Is she saying that perhaps listening to what a gay rights organization has to say is not a bad idea? Hard to tell.

The gay rights movement has primarily been Democratic territory–to call someone a “pro-gay rights Republican” would have seemed oxymoronic. But the role of gay rights in the Republican party is rapidly evolving–groups like GOProud and the Log Cabin Republicans work within the party to advocate for equal rights, and some Republicans have come out in favor of gay marriage–such as Ted Olson, Bush II’s solicitor general, who fought California’s ban on same-sex marriage. Ken Mehlman, the former Republican National Committee chair, came out as a gay man and has been raising money for gay rights groups. Fred Karger, a political strategist-turned-gay rights activist has begun campaigning in New Hampshire as a potential Republican presidential candidate.

Don’t get your hopes up though. There is no chance that the Republican Party will be adding “equal rights for gays and lesbians” to their party platform anytime soon. Gay-baiting rhetoric is still common from Republican politicians, and the party as a whole is still cold to the LGBT community. The party had been using gay rights as a wedge issue for years, and being “anti-gay” is still a quick-and-easy way to define oneself as a Republican.

To top it off, the new American Conservative Union’s (ACU) chair, Al Cardenas told FrumForum after CPAC that “it’s going to be difficult to continue the relationship” with GOProud, adding:

There are not enough African-Americans, Hispanics and other minorities here. That diversity is critical–you don’t need to change your value system to attract more diversity into the movement … [but] I’m not going to–for the sake of being inclusive–change the principles that have made the movement what it is.

David [Keene, outgoing chair of CPAC] invited these folks [GOProud] in an effort to be inclusive. … Having friends of ours leaving … presents difficulties to me. There’s always going to be some tension, [but] there should never be any tension between time-tested values.

Asked if someone who supported gay marriage could be a conservative, Cardenas replied,

Not a Ronald Reagan conservative… I will say this: We adopted a resolution unanimously at ACU advocating traditional marriage between a man and a woman, so that answers how we feel on the issue.

While Cardenas throws the gays overboard, though, former ACU executive director Chuck Muth has joined the GOProud advisory council. So there’s no telling which way the conservative wind is blowing here.

When it comes to gay rights, we tend to grade Republicans on a curve–anything short of hate speech and we give them soft applause. Taking that into consideration, GOProud’s sponsorship of CPAC was a step in the right direction. The social conservatives boycotting the event because of it was one step back. Saying that GOProud probably won’t be invited back next year? That’s a full sprint in reverse.

Image by guano under Creative Commons 3.0