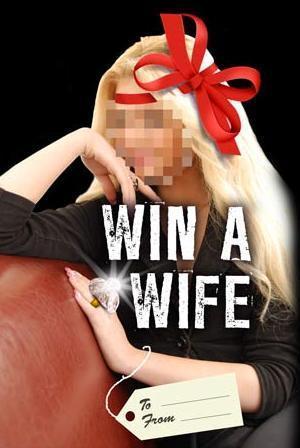 Happy Valentine’s Day–want to win a wife? The Rock FM, a radio station in New Zealand whose tagline is “Bands, Babes, Balls ‘n Bull,” unveiled its “Win a Wife” contest on Monday. And yes, it’s as offensive as it sounds:

It’s actually going to happen. And oh boy are there going to be some people with their panties in a twist over this one. The Rock is giving away a wife! But we’re not going to give this opportunity to just anybody … to weed out the no-hopers and time-wasters, we’ve developed the application form below. If you’re interested in holy matrimony with a potentially hot foreign chick, fill it out to the best of your abilities. If we pick you, you’ll be heading to the Ukraine with 12 nights’ accommodation with $2000 spending money to meet the lucky lady! Good luck, potential wife-wanters–if you’re what we’re looking for, we could be in touch …

The contest provides the winner with matchmaking services from the Endless Love Agency, an agency that matches Ukrainian women exclusively to New Zealand men. The agency’s website boasts:

There are hundreds of single, genuine, loving, loyal, faithfull [sic] and stunningly beautiful women from Endless Love Agency waiting for you now in Ukraine. While western culture continues to erode the values that we once treasured, like husband, wife and family life, Ukraine women have never lost these values.

The winner of the contest will get to select a woman from Endless Love’s database, have two videoconferences with her and unlimited email exchange, which will be translated for free. Even with the unlimited email communication, time is limited because The Rock has already picked March 23 as the day when the winner will travel to Ukraine to meet his intended. The Rock will provide the winner $2,000 spending money for the trip and throw in a free bouquet of roses and interpreters for the couple’s first meeting.

Since Monday, there has been a good deal of public outrage within New Zealand: a “Stop the Rock’s ‘Win a Wife’ Campaign'” Facebook group has more than a thousand members and the Ukrainian Association of New Zealand has filed complaints with the New Zealand Broadcasting Authority and Mediaworks, which owns The Rock. As of today, the contest has been been put on hold, its previous advertisements and contest descriptions have been pulled from The Rock’s website and the following disclaimer has been posted in its place:

Due to the growing concern and controversy surrounding The Rock’s latest competition ‘Win a Wife’,  Rock management will be making a special on-air announcement at 5 p.m. this afternoon.

I hope that announcement is a great big apology to women for its repulsive, misogynist and reprehensible stunt.

UPDATE: The Rock did not apologize.