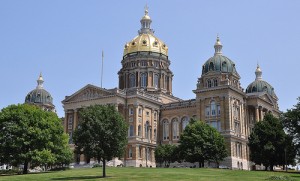 The Iowa Independent‘s Lynda Waddington reported today on state legislation that could drastically affect both women seeking abortions as well as abortion providers in the state:

Two bills sponsored by Iowa House Republicans could have significant public safety consequences, and perhaps the most unnerving of those potential outcomes would be the justifiable use of deadly force against abortion or family planning providers.

When the two pieces of legislation are combined they create a situation where a fertilized egg would be considered a person, and allow for the public execution of those who would threaten such a person.

If passed into law, the two bills — House File 7 and House File 153 — would offer an unprecedented defense opportunity to individuals who stand accused of killing such providers, according to a former prosecutor and law professor at the University of Kansas, and are something that might have very well led to a different outcome in the Kansas trial of the man who shot Dr. George Tiller in a church foyer.

Read the rest of the story here or the Mother Jones report here.

Photo of the Iowa Statehouse from Flickr user jimbown0306 under Creative Commons.