You Can Protest with the Women Liberating the Middle East - Ms. Magazine
Skip to content 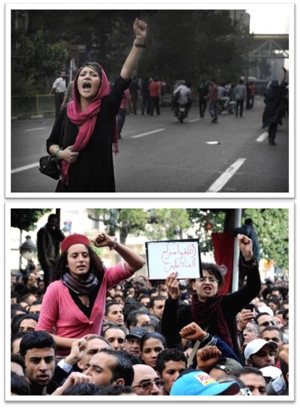 On the 100th anniversary of International Women’s Day, a group of feminists from across the Middle East have joined together as Women United for the Future of the Middle East to call for regionwide demonstrations in support of women’s rights. They’ve drawn support from the likes of GlobalSister.org, Women’s Institute for Freedom of the Press and Nawal Al-Saadawi, as well as Iranian American women’s rights activist (and former political prisoner) Esha Momeni, who had this to say:

With the chain of people’s uprisings in the region, we have an historic chance to find common ground to unite and support each other against national and international dictatorships. Women’s rights activists and feminist groups of the region, because of their nature, are the most potent links for building this coalition.

Indeed, alliances like these will play a vital role in the fight for human rights (including women’s rights) across the Middle East.

So, as an active, fierce and devoted feminist who may not be currently living in the Middle East, you may be wondering (as I was): What can I do to help?

I’m glad you asked. Not only have women played invaluable roles in recent pro-democracy movements in the Middle East, but so too has social media. For example, Women United for the Future of the Middle East isn’t simply calling for women in and from the region to stand up, speak out and take to the streets. They are also calling for women around the world to show solidarity and join the movement by attending a virtual protest on Facebook today. I just did so by “Liking” the group and accepting an invitation to “attend” the virtual protest on their Facebook page, and it took less than a minute.

Feminist alliances of all kinds have existed for centuries across the Middle East, and today, with the assistance of technology and social media, they have been given an unparalleled opportunity to spread and flourish. Women United for the Future of the Middle East and similar groups and organizations are taking full advantage of this opportunity, and for that gift and blessing, I say to all of them: Masha’Allah!

Photo from Soudeh Rah via Women United for the Future of the Middle East on Facebook.