No Hype for Women's Hoops - Ms. Magazine
Skip to content 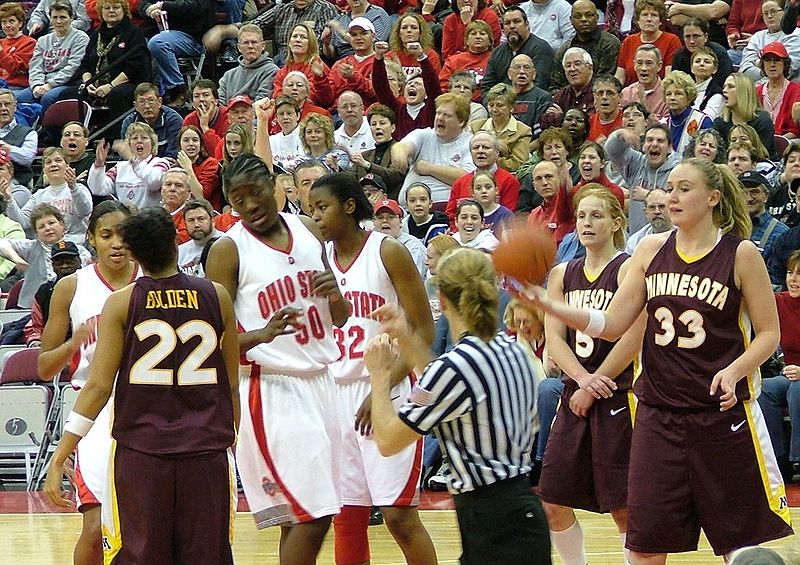 An “unnatural silence” may keep women’s basketball from having a larger fan base.

By Michael A. Messner

Another year of women’s college hoops is in full swing. Can anybody stop UConn from three-peating as NCAA champions? Will Baylor’s Brittney Griner break out as the game’s most dominant post player? How will the school I teach at, the University of Southern California (USC), do this season?

While pondering these questions, I remember a moment of March Madness last season when I invited a friend to watch a USC game with me. It turned out to be a thriller, with the outcome decided in the final minute of play.

The next day, my friend e-mailed me to say that he had tried in vain to watch a recap of the contest on local TV news. He was shocked.

I was not. Local media are nearly silent on my favorite sport, women’s basketball.

The morning I received my friend’s e-mail I was working on my research report,“Gender in Televised Sports,” analyzing data collected throughout 2009. Starting in 1989 and every five years subsequently, I’ve tracked coverage of women’s and men’s sports on TV news and highlights shows. (The report, co-authored by Cheryl Cooky of Purdue University, was released earlier this year by the USC Center for Feminist Research.)

And why wouldn’t they? After all, more than 11 million fans annually attended women’s NCAA games the past three seasons. The average attendance for top-division schools was 1,637 spectators a game, while perennial powerhouses Tennessee and Connecticut drew huge average home crowds of 12,896 and 10,182, respectively.

But I was wrong about TV news coverage of women’s sports. It dipped back to 6.3 percent in 2004, and in 2009 it nearly evaporated: Only 1.6 percent of all TV sports-news airtime in our sample was devoted to women athletes. SportsCenter, ESPN’s popular highlights show, spent even less of its total time—1.4 percent—reporting on women’s sports.

Some might argue that comparing news coverage of men’s and women’s sports is akin to comparing apples and oranges. After all, men’s college sports such as football and baseball have no fully developed women’s versions. That’s why it’s useful to contrast coverage of women’s and men’s college basketball—two equivalent sports played during the same time of year.

So let’s compare: During March 2009, the three network affiliates in Los Angeles aired 60 stories on men’s NCAA basketball, including game footage, interviews with players and coaches, and commentary on upcoming games. How much coverage did women’s NCAA basketball receive during that time? Zero.

The local newspaper does no better. In the past few years, I have sent an annual e-mail to the editor of the Los Angeles Times sports section pleading for more coverage of women’s college basketball. In 2008, then-editor Randy Harvey replied, “As you no doubt know, attendance for women’s basketball in Southern California is very low. …[Yours], in fact, [is] the only letter we’ve gotten this season about our coverage. The sport must attract more interest before it gets more coverage.”

Last season, I wasn’t the only one to complain to the Times about its coverage of women’s college basketball. In a March 2010 blog posting, the new sports editor there, Mike James, responded to reader complaints by writing, “True, we haven’t been covering a lot of women’s basketball this season, aside from a couple of features, largely because women’s basketball hasn’t been a major draw in L.A. …Our decision has been to try to make sure we reach the greatest number of readers we can with resources available, and regrettably, that means that some areas don’t get much regular coverage.”

True, the print media is going through economic woes—but that doesn’t explain the paltry coverage of women’s sports on TV. What’s astounding is that declining coverage of women athletes is occurring at a time when participation in women’s sports—in particular, basketball—is exploding. Linda Jean Carpenter and R. Vivian Acosta, who have tracked college women’s athletic participation rates since 1977, have found a steady and continuing climb in the number of college women’s teams. According to their 2010 survey, 99.1 percent of all colleges have a women’s basketball team, making it, by that measure, the number one women’s college sport. At the high-school level, nearly 440,000 girls play the game competitively, according to the National Federation of State High School Associations’ 2009–10 survey.

When big games are shown on TV, people tune in: The 12 women’s games in the NCAA tournament broadcast on ESPN last March averaged a more-than-respectable 1.6 million viewers. The 2010 women’s title game between Connecticut and Stanford attracted 3.5 million TV viewers, up 32 percent from the previous year.

Why does this matter? Let’s return to my shocked friend. Yes, he knew the final score and had experienced the emotional ups-and-downs of the game—so why did he need a news recap?

If you are a sports fan, you know the answer. We seek out wrap-ups and highlights of games we’ve seen, especially when our team has won, not so much to learn new information as to enhance and amplify the feelings— tension, suspense, exhilaration—we experienced watching the games. News and highlights shows do not simply “reflect” fan interest in certain sports, as sports producers and newspaper sports editors—who, let’s face it, are nearly all men—often contend. Rather, they are important cogs in what media scholar Sut Jhally called “the sports/media complex.” Popular men’s sports and mainstream sports media feed on each other, generating profits for themselves and fueling fans’ emotional connections. Meanwhile, college women’s basketball remains boxed out of this self-perpetuating loop of financial interests, thus remaining for the most part a well-kept secret among its growing cadre of loyal fans.

My friend’s disappointment in not seeing coverage of the women’s basketball game was all about being robbed of one more emotional hit as he chased the high of an exhilarating experience. Fans of men’s sports are used to having this fix routinely delivered in their living rooms, and it’s a key element in building audiences for men’s sports. Couldn’t the media do the same for women?

Michael A. Messner is a professor of sociology and gender studies at USC and author of It’s All for the Kids: Gender, Families and Youth Sports (University of California Press, 2009).

Photo of OSU vs. Minnesota from Wikimedia Commons.

Excerpted from the Winter 2011 issue of Ms. To have this issue delivered straight to your door, join the Ms. community.

Michael Messner is professor of sociology and gender studies at the University of Southern California. His teaching and research focuses on gender and sports, men and masculinities, and gender violence. In 2010, the USC Center for Feminist Research released the most recent update of his longitudinal study, Gender in televised sports: News and highlights shows, 1989-2009. He is the author of several books, including most recently Out of Play: Critical Essays on Gender and Sport (SUNY Press, 2007), and It's all for the kids: Gender, families and youth sports (California, 2009). Messner is currently researching men who work with boys and men to stop gender-based violence. In 2011, the California Women's Law Center is honoring him with its Pursuit of Justice Award, for his work in support of girls and women in sport.