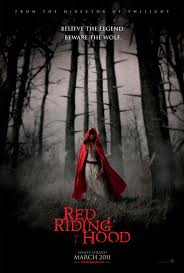 There is no doubt that the studio execs who greenlit the new film Little Red Riding Hood were likely licking their wolfy chops at the thought of creating the next Twilight, hoping to lure innocent young maidens to their darkened theaters. The film obviously echoes the Twilight franchise in many regards–it uses the same director as the first Twilight (Catherine Hardwicke), casts Billy Burke as the father (the same actor that plays Bella Swan’s father Charlie in the Twilight films), relies on soaring camera angles to capture Forks-like forests, is saturated with color symbolism, utilizes slow motion and extended stares and relies on first-person voiceover narratives a la Bella. However, unlike Twilight, Little Red Riding Hood does not encourage viewers to invest in the narrative of its flat characters and predictable “who is the monster” mystery.

Heck, Little Red Riding Hood makes Twilight’s Bella, Edward, and Jacob seem like incredibly rounded, complex characters. Valerie (Amanda Seyfried), she of the Red Cape, does little more than stare wide-eyed into the camera–that is, when she is not kissing or imagining herself kissing her love, Peter (Shiloh Fernandez). Peter is the woodcutter who doesn’t make enough money–we know that, but we know little else. The rich love rival, Henry (Max Irons), seems a rather nice fellow, but other than being vaguely likeable and somewhat heroic he, too, is a very flat. At least Jacob had a sense of humor, Edward’s angst was palpable and Bella–that character we so love to hate–was, among other things, clumsy, insecure, stubborn and well-read.

Though many critics framed female Twilight fans as mindless, shrieking ninnies, this newfangled attempt to cash in on the Twilight craze is thus far failing with audiences. Why? Because Twilight seduces its fans on many levels (as I argue in my forthcoming book), tapping into cultural anxieties about sexuality, religion, race, the institution of marriage and changing norms of femininity and masculinity. Granted, it is no literary masterpiece, but it is a modern-day fairy tale replete with all the ideological underpinnings of that genre. Little Red Riding Hood, on the other hand, is ironically less of a fairy tale than Twilight. In effect, it is a shell of fairy tale, with all the props and costumes and requisite “what big eyes you have” lines, but with none of the moral lessons or deep allegories that make fairy tales (and their modern descendants such as Twilight) so resonant.

As Catherine Orenstein argues in her book Little Red Riding Hood Uncloaked: Sex, Morality and the Evolution of a Fairy Tale, fairy tales are “among our most powerful socializing narratives.” This is why Twilight tapped into the cultural imagination, because it functions as a socializing narrative–teaching, for example, that abstinence is the best policy and (white) family values must be preserved at all cost. Not desirable lessons, but lessons nonetheless. Little Red Riding Hood, in contrast, teaches little else than the fact that Amanda Seyfried looks fantastic in a red cloak.

In her book, Orenstein examines the origins of Red’s tale, arguing that its permutations over the years reflect changing cultural mores. While it started out as a “bawdy morality tale” hundreds of years ago, with Red dying after she stripped down and slept with the wolf, it mutated into more of a damsel-in-distress narrative, with the woodsman/father saving Red’s life (and also her virginity, or “little red cap”). Fast forward to today, where Bella/Red is caught in a love triangle with a gorgeous vampire and an abs-tacular wolf-boy. While Bella’s forays into the forest function on various levels–eroticizing abstinence, making sexualized violence seem romantic, and framing marriage and motherhood as the happy ending for 21st century females–Valerie/Red in Little Red Riding Hood seems to go into the woods, her red cloak contrasting so beautifully with the snow and menacing trees, only because making the film look good (and like Twilight) will guarantee its success.

Valerie may be the feminist character author Sarah Blakley-Cartwright claims she is in her YA book adaptation of the film script, but on screen, her character is little more than a quasi-feminist shell. Yes, she walks into the woods when she is not supposed to, yes she has sexual longings (gasp!), yes she is determined to solve the mystery of the wolf and save the village, but none of these feminist leanings are framed as such. Instead, the focus is on her romantic yearning to make out with Peter without the pesky fear of wolf interruption. Even the close of the film focuses on this desire, with her gazing into Peter’s eyes. Yes, she has escaped arranged marriage and slain the wolf, and yes, she is living outside the strictures of society in her grandmother’s cottage, but she has hardly become a rabble-rousing Red. Instead, she embodies the “you go, girl” type of faux feminism, wherein being a sexual creature is framed as the only path to empowerment. While she gets down and dirty with her male hero of choice, that is hardly a feminist re-imagining of the tale.

As noted in a NYMag.com review,

Like Bella Swan, Amanda Seyfried’s Valerie is a swooning obsessive who is ultimately a bystander to her own life, whose beauty is power and whose only important choice is who she will marry.

In this regard, the film is a sad copy of Twilight’s weakest parts. Additionally, as it fails to tap into cultural anxieties or desires in any meaningful way, it is little more than a pretty red cloak draped over a skeletal version of its Twilight predecessor. (Maddeningly, it also copies the white privilege, racialized underpinnings of Twilight, with all leads played by white actors and the heavily accented guards/servants played by men of color!)

When a movie makes Twilight look like good cinema, we need to question what those wolfish studio execs were thinking. They may be able to lure us into theaters with their glossy images and lovely cinematography, but such lightweight, derivative rehashes can hardly capture our hearts and minds, let alone create the type of cultural zeitgeist spawned by the much-maligned but hugely successful Twilight franchise.

Little Red Riding Hood admittedly gives us a semi-strong female at its center (and throws in a strong grandmother as well), but it fails to be the feminist tale I hoped for. Instead, it seems little more than an attempt to cash in on the supernatural YA craze–this eyes-on-the-dollar-signs seems to me what critics should be questioning rather than blaming Twilight for the lackluster Little Red Riding Hood. Twilight is not the monster; rather, the cultural messages that encourage females to buy into their own cultural subordination are monstrous, and such narratives are pumped out by Hollywood at an alarming rate. Sadly, Little Red Riding Hood is hardly an exception.

Teaching Students to Write Their Rage