Violence Against Women: Not in My Backyard-Er, Subway Car - Ms. Magazine
Skip to content 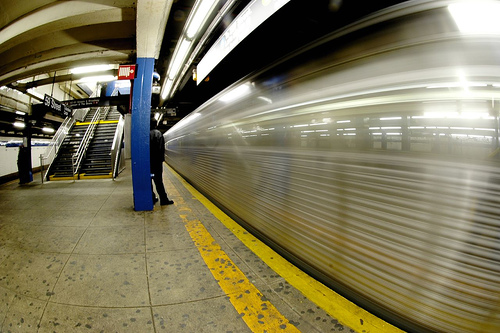 The other day I was riding the Number 2 Train home from the city, thinking about what I might write here in honor of Women’s History Month and feeling overpowered by current affairs. The tsunami, earthquake, nuclear disaster. Senseless murders in Libya. The gang rape of an 11-year-old girl. This month I sense such widening circles of sorrow swirling, it’s easier, I confess, to shut off and just hold close those I love. If I pause long enough to truly let the world in, I fear I’ll be carried out on a wave, swallowed up by a sea of emotion from which there is no return. And then, there’s the tragedy going on right in our own backyards–that which lifts us out of our chairs and just kind of compels us, without thinking, to act.

Here is what I mean:

On the subway seat across from me, a woman sits with a large-sized purse taking up half the seat next to her. A hulking man enters the car and sits down—partly on the seat with the bag, and partly on the woman who owns the bag. The woman gets up in a huff.

“Your bag was taking up half the seat,” he says.

“Your bag was taking up half the seat!”

This seems like it’s going to go on for a while. People nearby are getting edgy. I try to catch the woman’s eye, shoot her a glance of solidarity.

An older woman sitting closest to her catches her eye instead and says, “Let it go. You’re the bigger person.”

The two women chat. I can’t hear what they’re saying, but the man is listening all the while. The first woman gets off at the next stop. The man, it seems, is not through.

“She’s the bigger person huh?” he says to the older woman.

As the subway doors close, the dozens ensue. I try not to listen but, like a rubbernecked driver who can’t look away from a car wreck, I’m compelled. The words “Your mama…” “Your wife…” “Your mama…” “You’ve got the wrong one…” pour from the pair repetitively, and in escalating tones. There’s a feeling of gas rising to the point of combustion.

And then: THUNK. Sound of woman’s head being slammed against subway wall. Next, a piercing wail.

Violence, when it takes place right in front of you, has a quality of the surreal. I’m floating outside of my body, watching the scene from the ceiling, not sure that it’s happening. Suddenly, I’m standing up and slinking out of the way as three burly men (well, one burly man and two Hasids) move toward the pair, drawn to the violence with as much compulsion as I’m drawn away. The entire car is unsettled. On an ordinary subway ride home, life has become undone.

I’ve opted for flight, instead of fight, and I feel myself moving without a destination. My only desire is to get away. As I head toward the far end of the car I make out words coming at me:

Button? I follow my fellow passengers’ gaze and see the button a few feet in front of me, on the wall.

Slowly, these words jolt me from my frozen state.

There’s a big red button in every subway car that you push in cases of emergency. That button. Red means stop. When someone pushes the button, it means there’s going to be a delay.

“Lady, I just wanna get home.”

And that’s when it dawns on me: the people in the car are more concerned with getting home than alerting the conductor that an act of violence has taken place.

I push the button.

“A woman has been hit,” I say to the wall, leaning in.

Crackle crackle. Something inaudible. And then: “Do you need help?”

“A woman has been hit,” I say again, my mouth nearly touching the wall.

“There’s a violent man in this car!” I scream.

This does the trick. The conductor appears thirty seconds later and enters the car where the man and woman still sit, separated by bystanders who are actively keeping them apart.

“Who needs to leave?” the conductor says, moving toward the scene.

I can’t make out the rest, but it appears that the woman has decided not to press charges. The conductor exits the car. The subway lurches forward, and we continue on our way.

I get off a few stops later and note that the man and woman are still sitting there, each in their own silent huff.

A woman—an older woman—has been hit. In front of my eyes. Kitty Genovese comes to mind: a woman raped, a sidewalk full of people, and no one willing to call for help. People, what planet are we on?

I can’t stop a tsunami. But I can press a button. Truly, it’s the least I can do.

Editors’ note: What would you have done?

Originally posted at 9 Ways, a blog by Gloria Feldt.

Deborah Siegel, PhD, is an author, blogger and consultant. She can be found at Girl With Pen, She Writes and DeborahSiegel.net.