The Hunchback of Neiman Marcus: A Coming-of-Middle-Age Tale - Ms. Magazine
Skip to content 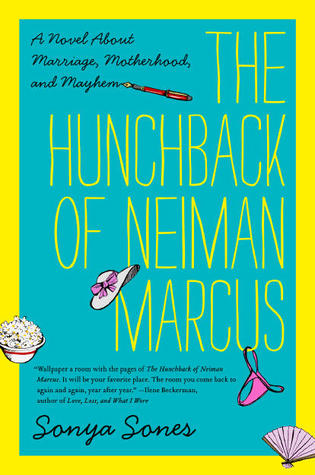 Shortly before her 50th birthday, Holly downs a bottle of wine with Cousin Alice, and together they gleefully burn Holly’s diaphragm. Menopause has arrived so she’ll no longer need it. Then, on the day she turns 50, hot flashes intrude, making her feel like “a tiny cup of liquid lightning” lies inside each of her cells. Adding to her woes, her college-bound daughter leaves her with an empty nest, her mother requires steroids that make her delusional, and her editor keeps calling with deadlines that are all but impossible given her writer’s block. Worst of all, her husband begins secretly corresponding with another woman. Can anyone blame her for feeling conflicted when, to her surprise, a certain man in her life appears to have eyes for her?

Holly is clearly on the brink of a middle-aged meltdown. She is also the clever, relatable protagonist of YA author Sonya Sones‘ first novel for adults The Hunchback of Neiman Marcus: A Novel about Marriage, Motherhood and Mayhem. Hitting stores today, April 5, during poetry month, the novel unfolds in lively free verse–a form well-suited to Sones’ insightful, meandering journey into her character’s psyche as she learns to confront the physical and spiritual challenges of aging without resorting to Botox or Spanx.

Something about Holly’s resilience reminds me of one of my all-time favorite female protagonists–The Wife of Bath, Chaucer’s storyteller extraordinaire from The Canterbury Tales, who proudly prevails through five marriages. Then, it occurs to me that I shouldn’t have to go all the way back to the 14th century to find another smart, empowering, heroine over the age of 50 who can still get her guy. So I try to think of  more contemporary examples.

“Well, there’s always Miss Marple,” my husband informs me, apparently misunderstanding my question. Eventually, I think of a handful of fully realized middle-aged women in books by authors such as Alice Adams or Nora Ephron, but all in all, I come up with fewer than I think I should. True, we live in a youth-obsessed culture, or so I’m told; still, when I consider the number of stories about libidinous middle-aged men, an entirely different picture emerges. Scanning my bookshelves, I informally inventory authors ranging from Henry Miller to Philip Roth, and in no time at all I flood my scratch paper with tallies. Finally, I come upon a row of works by one of my favorites, John Updike, and subsequently lose all patience to continue the count.

With this gender disparity in mind, I asked Sones about her new book and about ageism towards women, both in society and in the literary world.

Ms. Blog: It seems like the majority of  books being published disproportionately depict much younger women. Did you encounter resistance from publishers about the age of your protagonist?

Sonya Sones: I’m not really privy to the reason my book was rejected by a couple of publishers before HarperCollins had the good sense to buy it, but I do think that women over the age of 50 are underrepresented in the novels being published today. With this novel, I’m consciously trying to break that barrier. If the book’s a success I’m hoping it will lead more publishers to acquire novels about female characters of a certain age, and will encourage my fellow authors to write them. There’s a huge audience out there that’s hungry for more. They need, and deserve, to be fed!

You think of such great titles for your books, including One of those Hideous Books Where the Mother Dies and now The Hunchback of Neiman Marcus. What was your inspiration for this?

The title refers to a passage where Holly is shopping at Neiman’s when she notices herself in the mirror and is shocked to see how bad her posture is. She stands up straighter, but a moment later she sees an old woman, with a terrible hump on her back, who catches her staring. Averting her eyes, Holly is confronted with her reflection in yet another mirror and sees that her bad posture has snuck right back up on her. “Oh, no!” she thinks to herself, “Is this how it all began for her? Twenty years from now, am I going to be the hunchback of Neiman Marcus?”

The title also alludes to Quasimodo, who hid in a tower feeling subhuman and unaccepted. Do you think that society makes women over a certain age feel this way –invisible or worse?

It’s so funny that you pointed out the allusion to Quasimodo, because when I was writing this passage in the book I wasn’t even consciously aware of that layer of symbolism. I was just enjoying the word play. My unconscious mind is apparently much smarter than I am. … But, I do think society often makes middle-aged women feel unsightly, as if their aging bodies were some sort of deformity.

The people in charge of the media (mostly men) help fuel these feelings in women by featuring sexy young things in advertising, and by primarily focusing on stories about younger women in books, movies and on TV. This makes women feel ashamed of the natural process of aging, as if they’re somehow diminished by the mere act of growing older. This is the very notion I’m exploring (and fighting!) in my novel. By the end of the story, Holly has been empowered—rejecting the idea of slinking off into a tower, like Quasimodo, to hide herself away. “Spanx?” she says. “No thanx!”

I wonder if one reason  why there are relatively few middle-aged female protagonists is that it takes honesty to write about aging–we don’t like to see ourselves this way. Was it emotionally challenging for you to switch from writing YA to writing adult literature?

Writing is always emotionally challenging, whether I’m telling a coming-of-age story or a coming of middle-age story. It’s not easy to let my characters be honest—about their insecurities, fantasies and deepest yearnings—because I’m painfully aware that people reading my books will assume that all the humiliating parts are based on my feelings and experiences.  Even the most sophisticated readers fall into this trap.

But when I was writing this novel, it felt especially important for me to let Holly be totally honest about what it’s like to grow older. I wanted  the women who discovered my novel to know that they weren’t in this thing alone, that someone else truly understood what they were going through.

In addition to earning numerous awards, one of your YA books, What My Mother Doesn’t Know, ended up on the American Library Association’s list of Top 100 Most Banned Books of the Decade. Why?

I’m very proud that my book made the cut. It was quite a thrill to have it included on the same list with so many writers I admire—Maya Angelou, Judy Blume, Harper Lee, Madeline L’Engle …

There’s a passage, in which Sophie, the 14-year-old narrator, tells us:

Sometimes, on chilly nights, I stand close to my bedroom window, unbutton my nightgown, and press my breasts against the cold glass just so I can see the amazing trick that my nipples can do.

Because of this passage, I often receive letters from outraged parents, demanding to know why I’ve included such “filth” in my book. I tell them I think young women should be free to explore their bodies without feeling  guilt or shame. I hope girls who stumble across this moment in my book will feel less “weird,” less embarrassed by the curious and confused feelings they’re having about the changes in their pubescent bodies.

Were there any memorable, feminist, protagonists who inspired you as a young reader?

Nancy Drew did it for me. She was one very tough, very smart cookie—an invincible, independent woman who solved mystery after mystery without any help from men.

And, of course, Jo in Little Women was a wonderful role model, too. And so was Charlotte, the indomitable spider who used words to save the day, and inspired me to try to do the same.