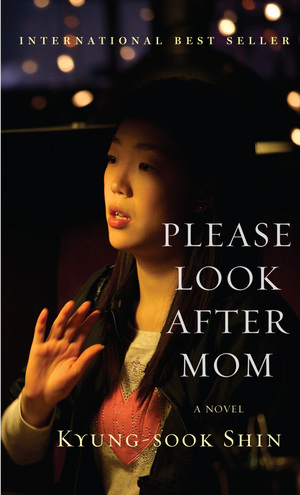 “It’s been one week since Mom went missing.”

So begins Kyung-sook Shin’s best-selling Korean novel Please Look After Mom, a haunting and deceptively simple book about a mother’s sudden disappearance. After losing his wife at a Seoul train station, a father tries to piece together her slow, ambiguous dissociation and his part in her depression. A daughter learns that she never knew her mother the way she thought she had. A son realizes how much his mother gave up for him to succeed. And finally, a mother, who finds herself lost both literally and metaphorically, traces her own sadness as she walks unimaginable distances through the South Korean countryside in a search that ultimately leads her home and to the memory of her own mother.

Told in four chapters, each corresponding to one of these main characters, this book remains hauntingly intimate and embodied throughout the course of this family’s musing about Mom’s guarded emotional and physical decline. In startling turns, simple but vivid memories reveal Mom’s years of suffering, brought on by a lifetime of feeling her life has no value outside of maintaining her home.

Please is filled with raw emotions, and characters that often display unlikeable and destructive behaviors, but there is such delicate awareness in Kyung-sook Shin’s narration that each character, however faulty, remains entirely accessible. The author masterfully destabilizes the novel with the use of multiple viewpoints, and in some sections employs the second-person address to draw the reader in. In this way, she points to the ways in which we are all complicit in the small (and sometimes large) abuses of motherhood. Yet the mother in this novel is so tender, at once completely without hope and imbued with strength, that Shin reminds us that motherhood is perhaps one of the most radical acts: the most selfless job in the world.

Still, motherhood has eaten away at Mom in this novel, and so do her duties as a wife. Shin never borders on dogma. Instead, she allows her characters to speak to and through institutions and traditions that treat the mother figure as an unflawed ideal, and in doing so gives light to both the damaging and fulfilling aspects of motherhood. Shin renders a tender and beautiful portrait of South Korea, but the novel recognizes a familial dilemma experienced throughout the world. As each character comes to realize that they have known less, loved less, and accepted less of Mom than they ever thought possible, Mom comes to understand her own position more acutely.

This is Shin’s first work to appear in English, translated by Chi-Young Kim. Since she has published numerous other novels and several collections of short stories and nonfiction books in Korean, expect that if this one sells to an English-speaking audience there will be more translations to come.