Religious Women and Contraceptive Use: It's the Norm - Ms. Magazine
Skip to content 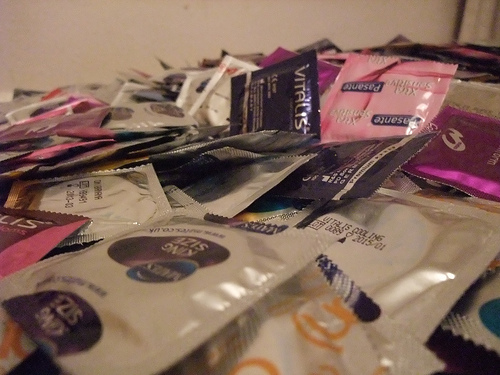 Are condoms compatible with churchgoing? The answer, according to recent research, is a resounding “yes.”

The overwhelming majority of religious women use contraception, according to an April study by the Guttmacher Institute [PDF], a reproductive health policy organization in New York City.

In real-life America, contraceptive use and strong religious beliefs are highly compatible. Most sexually active women who do not want to become pregnant practice contraception. This is true for Evangelicals and mainline Protestants, and it is true for Catholics, despite the Catholic hierarchy’s strenuous opposition.

Guttmacher’s analysis, based on a nationally representative U.S. government survey, has important implications for health policy, which is still being warped by the false but widespread perception that contraceptive use runs counter to strongly held religious beliefs. The report found a whopping 98 percent of sexually active Catholic women have used some form of contraception other than “natural family planning,” which is the only form of pregnancy prevention that the Catholic Church sanctions and which involves abstaining from sex when a woman is ovulating and thus her most fertile. Less than 2 percent of Catholic women actually use natural family planning, Guttmacher researchers found.

Not only are religious women protecting themselves from unwanted pregnancy, they are protecting themselves using the very methods that religious conservatives oppose the most. Sixty-eight percent of Catholic women use what Guttmacher researchers call “highly effective method[s]” of contraception: the IUD, sterilization, the birth-control pill or other hormonal methods such as the patch or ring. These types of birth control are also used by 73 percent of mainline Protestants and 74 percent of Evangelicals.

The U.S. Conference of Catholic Bishops (USCCB) has spearheaded the anti-choice campaign to prevent contraceptive services from being covered in health insurance plans without cost-sharing (such as co-pays or deductibles) under the new health-care reform legislation. And, according to the Guttmacher report, “most Evangelical leaders strongly oppose sexual activity—and contraceptive use—among unmarried women of all ages.”

In response to the Guttmacher findings, health advocates have ratcheted up their campaign to fight conservative church leaders and the Catholic health ministry. That ministry–the largest not-for-profit provider of medical services in the U.S., treating one in six hospital patients in America–is actively lobbying for legislation that would deny women access to birth control.

For progressives, it comes as no surprise that religious women are rejecting the church party line. Says Jon O’Brien, president of the Washington D.C.-based Catholics for Choice,

It’s a no-brainer for Catholics that we have no problem using and supporting family planning. The overwhelming majority of Catholics feel this way no matter what their Bishops may say.

Though research on contraceptive use among Evangelical women is limited, polls conducted by Catholics for Choice show Catholic women are as likely as any woman to have abortions and use contraception that is banned by their church. Fifty percent of Catholics support abortion when a woman and doctor determine that it is appropriate, while 63 percent support insurance coverage for contraception and 78 percent think abortion or emergency contraception should be possible when pregnancy is the result of a rape.

To read more about the Catholic health-care system’s squeeze on reproductive rights, join the Ms. community today and receive the latest issue straight to your mailbox.