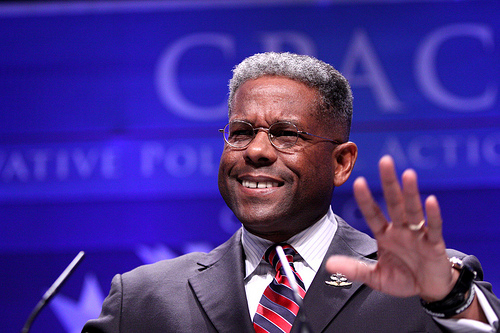 This week, Mother Jones and a few other places ran a tape of some curious remarks made by the always eccentric Rep. Allen West (R-FL). Speaking to the conservative group Women Impacting the Nation, he said:

We need you to come in and lock shields, and strengthen up the men who are going to fight for you. To let these other women know on the other side—these Planned Parenthood women, the Code Pink women, and all of these women that have been neutering American men and bringing us to the point of this incredible weakness—to let them know what we are not going to have our men become subservient. That’s what we need you to do. Because if you don’t, then the debt will continue to grow.

The bit about “neutering American men” is just beginner-level misogyny– hell, Kay Hymowitz is making a career out of that stuff–but the way this passage ends is genuinely bewildering. What do “subservient men” have to do with the national debt? I thought that was more about the huge gulf between the amount of money the United States spends and the revenue it collects. Stuff like that.

Maybe because, for West, every issue is somehow about masculinity–specifically, the feudal warlord ideal of masculinity that exists only in his head. That reading of his fiscal policy makes even more sense when you look at other excerpts from his remarks, like the one in which he argues that women are great pretty much because they can turn men into bone-crunching badasses worthy of a Zack Snyder film:

But when you understood what made the Spartan men strong, it was the Spartan women. Because the Spartan women at the age of nine gave up their male sons. And their male sons went into a training that was called the Agoge and they stayed in that training for the next 11 to 12 years. And when they were finally qualified, when they were finally ready to join the ranks for the Spartan army, it was not their father who gave them their cloak and shield. It was their mother who gave them their shield. And when the Spartan mother gave that young Spartan warrior his shield, she gave him this basic commandment: ‘Spartan, here is your shield. Come back bearing this shield or being borne upon it!’

When Queen Gorgo, wife of King Leonidas, was questioned by the Persian emissary and she somewhat spoke out of turn to this Persian emissary, he tried to rebuke her. And she looked at him and said ‘Persian, beware, for it is Spartan women who raise Spartan men.’

Of course, Sparta was also a brutal totalitarian regime that horribly abused its majority slave population. But the point is, those dudes were hard as shit! And all because their wives and mothers weren’t a bunch of Code Pink feminazis.

Meanwhile, back in the real world, one fifth of the federal budget goes to defense. That’s $705 billion last year alone, also known as 2,350 times the funding that went to Planned Parenthood, also known as 42.8 percent of all defense spending in the entire world. So maybe West’s veneration of masculinity as tied to unrestrained militarism has just a little bit more to do with the deficit than does feminism.

White Masculinity and the Buffalo Massacre