Will Women in Japan Wear the "Chernobyl Necklace"? - Ms. Magazine
Skip to content 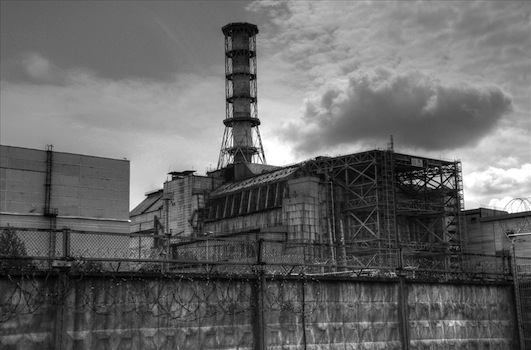 Natalia Manzurova was a 35-year-old nuclear engineer in Russia when she was assigned to be part of the clean-up crew at the Chernobyl power plant in northern Ukraine, site of the worst nuclear accident in history.

Despite her training, Manzurova did not fully comprehend the dangers. On a preliminary visit to Chernobyl shortly after the disaster, she stood out amidst the slew of workers dressed in anti-contamination suits.

“I arrived in a short dress and sandals–I had no idea what I was going in for,” she said.

On April 26, 1986–25 years ago yesterday–Chernobyl’s nuclear reactor No. 4 exploded after an experiment went awry. The blast released 400 times more radiation than the bombs dropped on Hiroshima and Nagasaki in Japan, according to the International Atomic Energy Agency.

Manzurova began her work as a so-called liquidator at Chernobyl in the summer of 1987. Her job was to help clean up Pripyat, a city located less than two miles from the reactor whose entire population of 50,000 was evacuated after the disaster.

During her four and a half years burying contaminated houses and conducting experiments on affected plants and animals, Manzurova would come to experience the noxious effects of nuclear power firsthand. She says Soviet officials monitored and studied the effects of radiation exposure on the liquidators, but that she and her colleagues were never informed of the results, nor were they given the proper tools to monitor their radiation exposure themselves. As a result of her work in the contaminated zone, Manzurova says she now bears the “Chernobyl necklace“: two scars on her neck from operations to remove cancer from her thyroid.

“The left part of my thyroid gland was removed in 1990 when I was still working in Chernobyl,” she said during a recent U.S. speaking tour organized by the anti-nuclear activist organization, Beyond Nuclear. “Less than a year ago the gland was operated on and removed entirely because of tumors in the remaining part.”

After stories of forced abortions in the region surfaced, Manzurova told how her own suspicions were raised during a routine assignment in Pripyat:

Next to the operation theater in the gynecology department, we saw a big can that is usually used in villages to carry milk. I opened the lid of this can and saw that there were fetuses that were from about the seventh to eighth months of pregnancy. …

There was a secret order by the government that all the pregnant women inside the 30-kilometer [18.6 mile] exclusion zone were to undergo either a Cesarean operation or were to be induced so that they would give birth prematurely. Only later the question came to my mind: What happened? Were these [fetuses] still alive when they were put into these big cans? It was evident they were forgotten in haste.

Now 59, Manzurova says she is the only living member of her 14-person team in Chernobyl. She says most of her colleagues died from cancers and illnesses due to radiation poisoning.

The International Atomic Energy Agency says that such health problems are more the result of psychological trauma experienced by the liquidators while working in the contamination zone. But Robert Alvarez, a nuclear expert at the Institute for Policy Studies, says the powerful effects of radiation on the human body are only just beginning to be understood.

“There’s now growing evidence that radiation can cause a lot of other things to happen because it’s one of the few environmental poisons that can damage your overall immune system,” Alvarez said.

Alvarez and Manzurova fear that Japan may now be facing a similar situation following the 9.0 earthquake and resulting tsunami that devastated the island nation’s northeastern shore on March 11. Recently Japan raised the severity of the crisis to level 7, the same as the Chernobyl disaster. Alvarez says if the Fukushima crisis continues to escalate, it will put many Japanese at risk, particularly women and children.

“Women are twice as sensitive to contracting cancer of the thyroid and breast [from ionizing radiation] than men, and of course, you have the offspring,” Alvarez said. “Exposures during that period [pregnancy] are much more serious than they would be for an adult, and you’re looking at the probability for raising the risk of childhood cancer and things like that.”

As soon as [the people] recognize the high number of victims in the population and the damage to the environment, then the real cost of the nuclear power industry will be immediately understood for what it is.

Excerpted from Women’s Enews. Read the full article at womensenews.org.