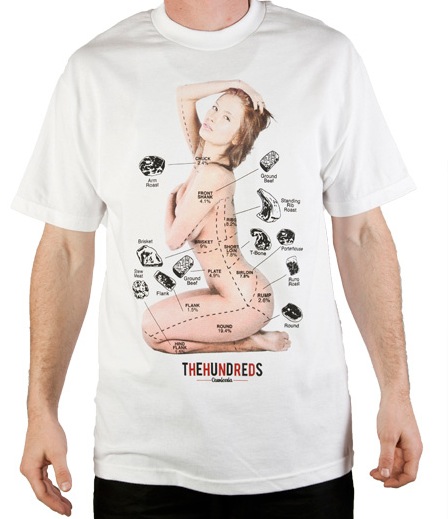 Eww. This is the “carne t-shirt” from Los Angeles-based “street subculture” clothing line The Hundreds, and it has a naked woman cut up like pieces of meat on it.

The “details”of the shirt that The Hundreds provides are especially disgusting:

Mmmm. Carne. Oh, sorry, I got a bit distracted there. Not that you really care, since you’re probably mesmerized by the lovely Shay Maria, but this one was inspired by vintage Mexican posters from butcher shops. See, you still don’t care. But you know you like the shirt. You just want to eat it up. Oh, and there’s a bomb print at the top back too. Available in black, white, and red.

Oh, sorry, I got a bit distracted by your sexism and bad taste in fashion.

Of course, this isn’t the first time women have been depicted as meat in the media. In 1978 Larry Flynt put a woman literally being ground into meat on the cover of Hustler magazine–his response to feminists who thought women shouldn’t be treated like meat. His snide comment on the cover? “We will no longer hang women up like pieces of meat.”

And here’s a PETA ad featuring Pamela Anderson that is almost identical to the carne shirt. 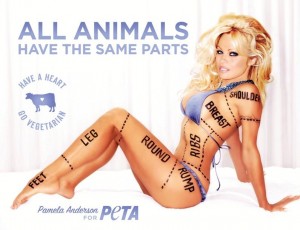 The ad created quite a stir, and Canada denied PETA a permit to launch the campaign because the ad “goes against all principles public organisations are fighting for in the everlasting battle of equality between men and women.”

For even more images of women as food and food as women, check out Sociological Image’s extensive post on sexualizing and gendering food.