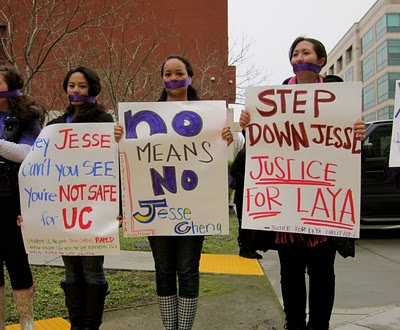 Since October, the alleged victim, known as “Laya,” and the feminist Justice for Laya Coalition have sought the removal of Cheng from the position. As Student Regent on the UC Board of Regents, the highest decision-making body in the University of California system, Cheng represented the entire student body of the 10 California campuses, composed of more than 220,000 students.

Laya filed a complaint of sexual battery and attempted rape against Cheng, a student at UC Irvine, after an October 4 incident at Cheng’s apartment. The two had previously dated. The Orange County District Attorney’s Office refused to prosecute, saying there was insufficient evidence. Cheng made an admission of his behavior in an email, but later retracted it.

Laya continued to search for an advocate to help her with the case and found the Mariposa Center for Change, a newly established independent service center in Los Angeles for multi-ethnic women. Mariposa partnered with AF3IRM and other supporters to create the Justice for Laya Coalition. For the past seven months, this group has picketed, petitioned and pleaded with the UC Board of Regents to make Cheng resign.

The Justice for Laya Coalition celebrated the decision:

Cheng, who had attacked Laya in October of 2010, had proclaimed his innocence, boldly announcing to media outlets, including the OC Weekly and the Los Angeles Times, that he refused to resign because, ‘That would be an admission of guilt.’ His recent resignation only confirms what the Justice for Laya Coalition asserted from the beginning: that Cheng was guilty of sexual assault and battery, was not fit to represent over 200,000 UC students on the Board of Regents, and must resign immediately.

This is a victory for my case, but also for other victims of sexual assault, battery and rape. We are one step closer for creating a place where women can step forward, demand and actually receive genuine justice.

Cheng told The Daily Bruin, the UCLA student newspaper, that he didn’t feel pressured to resign because of the controversy, and that “people have been very supportive of me.” But his resignation occurred soon after the UC Irvine Office of Student Conduct–which had found Cheng responsible for “unwanted touching” of Laya–denied Cheng’s appeal of its ruling.

The Justice for Laya Coalition, while pleased by Cheng’s resignation, still wants Cheng prosecuted for the alleged attack and asks that Women’s Centers be funded on UC campuses to help avoid similar situations.

Image of a Justice for Laya Coalition protest from http://justiceforlaya.blogspot.com.