Laying the Smackdown on HIS Candy Ass - Ms. Magazine
Skip to content 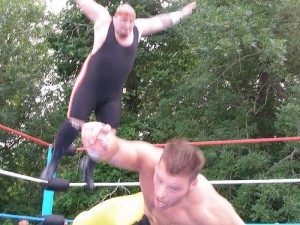 The now-viral video “Laying the SmackDown on Her Candy Ass – Get Her Number!”–whose popularity was helped by it being tweeted by Ashton Kutcher and The Rock–shows a bunch of rather nerdy college guys trying to pick up women on the street. The twist here is that the guys are using ridiculous wrestling lines–such as “lay the smackdown on your candy ass”–which makes the video mildly amusing at times, but mostly it’s just plain misogynist.

Here’s the video in question:

Some of the interactions are harmless enough, but others make you want to protect the woman in question. The thing is, being hit on isn’t flattering; it’s a form of harassment. Women typically do not walk along a street hoping to garner such attention–whether the pickup lines come from the WWE or not. Women also don’t expect to be secretly filmed and then have their interactions posted on the Internet.

Guys, there’s a surefire way to know that you’re making a woman uncomfortable: She’ll laugh nervously. Society has give women the message to be polite and ladylike, and this takes the form of nervous laughter when we’re in a stressful situation. Inside, we might be saying, “Get the hell away from me,” but outside we giggle. Many of the women in the video let out this laugh when one of the guys says, “Come on, let me have your number.” Rather than clearly saying no, they say, “I don’t think so.” I know that a lot of guys who watch this video will say, “If they don’t want to, they should just say no.” But guys, the truth is that we’re trying. You have to understand that since you’re a strange man coming up to us, we are likely to see you as an aggressor, and we’re trying not to make you mad.

Street harassment sucks. It’s uncomfortable and occasionally shameful. When my friends and I lived in New York City, we had to deal with it all the time, so we would put in our IPod earbuds and try to block out the catcalls. But we couldn’t block out the stares. And in case you’re wondering, it didn’t matter what we were wearing: I could walk outside in sweat pants without makeup and I would get catcalled or asked out by the guy serving me frozen yogurt. And it’s not like a movie in which Jake Gyllenhaal plays the frozen yogurt guy and is all charming and gorgeous and lovable. No, it’s creepy, it’s weird, and when I politely decline the guy keeps up his rap–just like in the video. Guys, that’s when you go from a regular person to a creepy effing stranger. Do you really want to be a creepy effing stranger?

I couldn’t watch this video without creating my own video response, so here it is:

Photo by Flickr user daysofthundr46 under license from Creative Commons 2.0