Dominique Strauss-Kahn and the Myth of Consent - Ms. Magazine
Skip to content 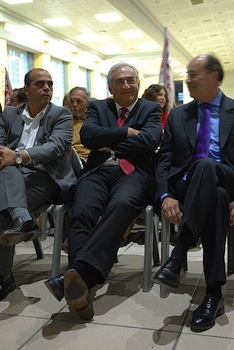 The sexual assault charges against the now-former IMF president Dominique Strauss-Kahn–followed days later by revelations of a child fathered out of his marriage by California’s former governor, Arnold Schwarzenegger–has sent pundits scurrying to explain “why high profile men cheat,” as Time magazine so delicately put it. Alternately, in its “Week in Review” section last Sunday, May 22, The New York Times took great pains to explain that these events ought not to be taken as evidence that all men are sexist pigs. “Power is a facilitator,” commented psychologist Ronald Levant, muting the more salacious qualities of Henry Kissinger’s famous dictum and making power sound a little bit like ideological Viagra. But, he added, it “seldom changes personality in any significant way.”

The unfolding events and these somewhat off-target comments sent me scurrying back to some court testimony I read a few years ago. I had been retained as an expert witness for one of the women who had been gang-raped by football recruits during a recruiting weekend at the University of Colorado in 2001. (The cases, brought by Lisa Simpson and Anne Gilmore, were settled out of court, but all the major university figures–the chancellor, the president, the athletic director and the football coach–eventually resigned in well-deserved disgrace.)

In a deposition, one of the football players at Colorado described how easy it was for an athlete to have sex. There were so many “football groupies,” he said, that all he had to do, any time he wanted to, was snap his fingers and there were girls who would have sex with him. Anytime, anywhere.

No doubt he was right. We’ve all heard stories about groupies who hang around rock stars, athletes, elected officials and other celebrities. Of course there are women for whom power and celebrity are as aphrodisiac as they seem to be for some men. That’s not the question.

The question is how many groupies are actually out there? In the Colorado case, one of the attorneys for the raped women asked the football players a most telling question:  “How many female students here at CU would you consider to be ‘football groupies’? One running back said, “About half.” Another player, a wide receiver, answered “a majority.”

In these guys’ minds, every other female student at Colorado would have sex with them, any time and anywhere. But I’d say it’s more likely that, at any one moment, only a handful–oh, let’s inflate wildly and say one-half of 1 percent, or about 72 women on the campus–might actually be classified as groupies. That would put these football stars off by about 14,300.  In other words, their celebrity so distorted their vision that they misconceived the sexual interest of women they encountered on a daily basis–“misoverestimated”–as our former president might have said–by a factor of 10,000 percent.

This distorted perception goes to the heart of the Strauss-Kahn case. Because of his status, he may well have encountered women who let their availability be known. Just as obviously, he needn’t have acted on it. Being human, men are capable of making choices about when and with whom to unzip their trousers. Only Pavlov’s dogs salivate to every single bell that’s rung.

But this case speaks to something besides the choices men make: it speaks to that sense of entitlement, in which perceived sexual access to women is a perk, in which every place feels like the set of Mad Men–where the women are clustered in a corral in the center of the office and are assumed to be sexually available to all the windowed-office executives.

During a court hearing on the Strauss-Kahn case in Manhattan, the former IMF-head’s lawyer, Benjamin Brafman, told a judge that the “forensic evidence” was “not consistent with forcible encounter.” This has suggested that Strauss-Kahn may use as a defense against rape that any sex act between himself and the room attendant was consensual. The attendant’s lawyer countered angrily that there is “no question” that the alleged act was not consensual.

The answer to the question about why powerful men cheat is, of course, because they can. But it’s more than that. It’s because they think they’re entitled to access to women’s bodies as a perk of their celebrity status. And they think that pretty much every woman they meet feels the same way about that as they do. And it’s also that they make a choice with the big head, not the little one. It is quite likely, I believe, that through those distorted lenses Dominique Strauss-Kahn may have thought the encounter was consensual.

That’s what Lisa Simpson found out in Boulder, Colo., a decade ago. She was sleeping, in her shared bedroom in her apartment after an evening of hanging out with some of her roommates. She was awakened by a very large young man whom she had never seen before. “I’m a recruit,” he said.  “Show me a good time. Suck my dick.” He also testified that he thought it was consensual.

Photo of Dominique Strauss-Kahn (center) from Wikimedia under Creative Commons 3.0