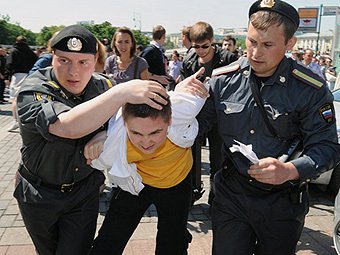 One of the most courageous voices of GayRussia, a group that organizes direct LGBTQI action, is Anna Komarova. A genderqueer activist, Komarova was one of 18 protesters (15 of them Russian) arrested as they tried to stage the banned Moscow Gay Pride parade on Saturday. All were roughly handled by the police; Komarova was forced to the ground by police and kicked in the head.

Three of those arrested were foreigners–Andy Thayer and Lt. Dan Choi from the U.S., and Louis-Georges Tin from France.

Komarova gave me an exclusive interview on Sunday. “I’m an a-gender [genderqueer, transgender], a member of the organizing committee of Moscow Gay Pride,” he told me. “I use clothes and my language to express my gender identity: I use feminine name and masculine grammar gender. So use masculine grammar gender when you write about me, please. My work corresponds to my temperament, and besides that I think that it’s impossible to get any other rights without an opportunity of realization of the basic right of freedom of assemblies in Russia and anywhere else.”

I asked Komarova about the events leading to the protest, and what he had personally experienced. What I found particularly interesting is that he reflected minimally on his injuries and more on the cause itself–an expression of extraordinary commitment and bravery.

In his own words:

We have been fighting for Moscow Gay Pride since 2005. All of our actions in Moscow weren’t authorized by Moscow authorities. We were arrested and beaten by counter protesters many times.

The head of the organizing committee of Moscow Gay Pride was kidnapped by special government services for three days in 2010. But anyway, in 2010, we won our case in European Court of Human Rights [ECHR] about Moscow Prides 2006-2008. The St. Petersburg authorities began to authorize LGBTQ actions after the decision of ECHR. So of course we expected and hoped Moscow Pride 2011 to be authorized this year.

After the rejection of Moscow Pride by the authorities we decided to organize Moscow Pride just like we did it in the beginning in 2006. First, participants gathered near the Tomb of the Unknown Soldier in Alexander Garden near the walls of the Kremlin at 1 p.m. Then. at 1:30 p.m., a second event took place in front of Moscow City Hall on Tverskaya Street. The participants were arriving at the various places in small groups.

As usual, we had only a few seconds to unfold our slogans, and it was clear that after that we would be arrested or attacked by counter protesters. I led a group of two persons: Lt. Dan Choi and Andy Thayer. We were arrested immediately after media noticed us not far from Alexander Garden. I took my slogan “trans rights are human rights” out of my pocket, and before I could unfold it I was immediately attacked by police from behind. They turned out my arms so I found myself on the ground.

Then somebody kicked me by my head, two to four times, and then I was led by police to the car. There were a lot of counter protesters in the car and another two women. One of them was Elena Kostyuchenko, a correspondent of the famous Russian opposition newspaper Novaya Gazeta, who came out at the day of Moscow Pride. She took part in it and was badly beaten and injured by counter protesters and she is still in the hospital. At the car I sent a [text message] to Dan Choi to learn about him and Andy. They were arrested, too. Then we spoke a little bit by our mobiles.

Everything was quiet both in my [police] car and in their police station (they were singing songs, with Louis-Georges Tin loudly there). Later at the police station a police officer at first tried to insist that I give information and evidence that was against myself. I refused. … Then they brought me to a hospital to get medical help for my wounds. So I was freed at about 8 p.m.

I don’t feel any fear now. I never hide either my gender or any other identity nor my face from newspapers. And there is St. Petersburg LGBT Pride in June. I’m waiting for it.

The action by police and counter protestors in Moscow speaks not only to homophobia, transphobia and genderqueerphobia, but also to the oppression of the basic right to assemble. There are also reports that the police may have sided and possibly collaborated with the counter protestors. According to British human rights campaigner Peter Tatchell,

We witnessed a high level of fraternization and collusion between neo-Nazis and the Moscow police. I saw neo-Nazis leave and re-enter police buses parked on Tverskaya Street by City Hall.

The Russian TV presenter on channel TV-Centre, Olga Bakushinskaya, blogged that she also saw right-wing extremists at City Hall sitting in police buses and speaking openly with the riot police, the OMON.

This was a peaceful demonstration where activists simply sought to unfurl their banners and advocate for Russian in the LGBTQI community. Freedom of Assembly [PDF] is a fundamental right to which all members of the OSCE have  committed.

The U.S. State Department has condemned the attack, yet U.S. activists are hoping to hear directly from Secretary of State Hillary Rodham Clinton. One can only wonder though if protocol prohibits such a statement from the Secretary, given the fact that two Americans were involved in a protest on foreign soil.

In the meantime a tip of the hat to Anna Komarova and his comrades as they plan to keep LGBTQI visibility and basic rights their mission. Onward to St. Petersburg!

Melanie Nathan is an LGBTQI Activist and is CEO of Private Courts Inc., a conflict resolution, equality & human rights advocacy firm. Her CV can be found at www.visualcv.com/melnathan. She is a commissioner on the Marin County Human Rights Commission and V.P. on the Board of Fair Housing of Marin.