Weiner, Vitter, Spitzer, Ensign, Edwards, Tobias: One of These Is Not Like the Others - Ms. Magazine
Skip to content 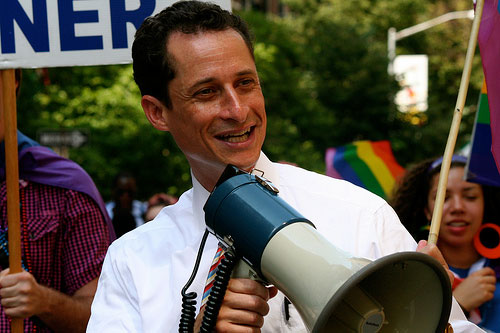 Watching the press conference held by Congressman Anthony Weiner (D-N.Y.) yesterday, my first reaction was, “What is it with these male politicians who think with their dicks and think the rest of us just fell off the turnip truck?” And a half hour into it, my second thought was, “Oy vey, please stop talking already.”

I also knew that Weiner’s actions would automatically be compared to those of other “fallen from grace” male politicians who did naughty things and tried to hide them.

But Weiner’s case is vastly different from these other guys, and here’s why.

Weiner, a recently married man, sent photos of himself in various stages of dress or undress through Twitter and other media to women in various places. His sexual preferences appear to tend toward the voyeuristic and, he claims, his wife knew about them.

Is it dumb and poor personal judgment for a politician to send photos of himself in various stages of undress and arousal to women who are not his wife? In my opinion, yes. Is it my business? Not really, unless he has, for example, been railing against “sexting,” faulting women, contraception, abortion, and gay people with the downfall of America and earthquakes in far-off places, or has been seeking to restrict people’s rights based on a bastardized version of morality. Is it even dumber to go on an “I-did-not-send-pictures-to-[that]-woman” pity tour to make himself look like the victim of hacking? Oh, yeah. He may yet be forced to resign for his stupidity.

But, I don’t necessarily think he should have to do so. As I have said here before, I really do not care in what sexual practices consenting adults engage or what agreements are forged between two consenting adults, especially if the spouse of a given Twitterer knows about and lives with her or his spouse’s preferences.

What I do care about is the “holier-than-thou” moralizing in which so many of these philanderers engage, and the fact that they both pretend to be better than the rest of us, and, even worse, attempt to legislate our private lives.

Weiner did none of this.

Former New York Governor Eliot Spitzer (D-N.Y.) waged a war against sex workers, while simultaneously paying for their services and travel across state lines. Two no-nos. He broke the law he was supposedly fighting to enforce, a law based on views about sex work that are arcane, not based on evidence, and moralistic to say the least. He used women’s lives to advance his political career.

Senator David Vitter (R-La.) is a proponent of some of the most egregiously misogynistic laws and policies being proposed and enacted and is a member of the fundamentalist religious right which, it appears to me, is fundamentally based on “do unto others what you tell them not to do themselves.” Vitter seeks to deny women access to every form of reproductive health care, for example, while merrily screwing around outside his marriage. And he is a member of that august group that likes to expound on the “danger to the American Family” of recognizing gay, lesbian and transgender persons as human beings with human rights.

Senator John Ensign (R-Nev.) is a member of the C Street tribe and not only a moralizing legislator but is alleged to have used campaign funds to pay off his mistress’ family. As far as the rest of Ensign’s hypocrisy, see Vitter, David, above.

Former Senator John Edwards (D-N.C.) played the happy family man while hiding his honey and their love child and also is now charged with using campaign funds inappropriately. It’s the latter part, and his denials of such during a Presidential campaign that takes it out of the realm of what was going on between him and the now-deceased Elizabeth Edwards and into the public realm of judgment.

Ambassador Randall Tobias vociferously promoted policies–abstinence-only until marriage, the prostitution pledge–that endangered the lives of countless women in the poorest settings throughout the world. And then he had his “masseuse.”

Weiner may have used his digital camera in what many consider an inappropriate manner, and, yes, he lied about it, which was unbelievably stupid but also human. But unless and until he is found telling me and others how to live our private lives and unless and until we find out that digital camera was paid for by campaign funds, the Twitter-pix problem is between Weiner and his wife.

Above: Rep. Weiner at the 2009 Gay Pride festival in New York City, courtesy of Flickr user Boss Tweed, under CC 2.0.

I'm a freelance writer and bookshop manager who lives in Cape Town, South Africa with my wife Sam and our two sons Josef (12) and Benjamin (10).