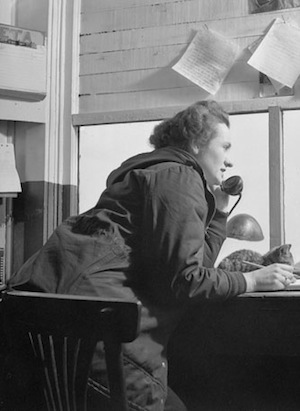 When I started to collect kitschy advice books to women from thrift-store bargain bins in the 1980s, their main attraction was a good laugh. My stash included some gems from the 1970s, such as Helen Gurley Brown’s Sex and the New Single Girl, featuring advice about conducting office affairs with married men, or Partridge Family star Susan Dey’s dieting advice book to girls (she later came out as having anorexia).

I didn’t realize I was investing in a bona fide genre: what feminist scholars, such as those heading a major collection at Duke University, call “prescriptive literature”–a body of work giving advice to women that reveals social and cultural norms of the era.

Both the humor and the historic value make prescriptive literature a fascinating field of study. And no one achieves that combination better than Oakland writer Lynn Peril. For decades, she has tirelessly chronicled and analyzed mid-20th-century examples of what she calls “‘pink think’: a set of ideas and attitudes about what constituted proper female behavior … [that are] earnest, kitschy and offensive.” She started earning street cred in the field with her 1990s ‘zine Mystery Date, which showcased women’s advice books, and then with her long-time “Museum of Femorabilia” column in Bust Magazine.

Now, Peril has released her third, fiendishly funny book on the genre, Swimming in the Steno Pool, about the role of the secretary in the public imagination. Part of the subject’s appeal to Peril is personal: Like so many of us, she has supported her writing career by working as a secretary (or, in modern parlance, an administrative assistant). But another draw, as Peril points out in her intro, is that no other profession has more advice marketed to it than the secretary.

In the late 19th century, entering what had previously been an all-male profession, the woman secretary was invading the “man’s world” of business–and she required detailed instruction about how to fit in. That was as tricky as navigating traditional femininity itself, involving a constant delicate balance of being submissive, but not too sexy; and then being competent, but not competitive with men. Many advice books flat out stated that you may have a good idea, but don’t protest if the boss steals it as his own.

Peril traces this secretarial pink-think beyond the advice book, looking at how the secretary has been portrayed in films (such as the 1960 “The Apartment”), women’s magazines, teen novels, and even classified ads. She also has scoured newspaper advice columns of the 20th century, in which “I’m in love with my boss” has been a major theme. That’s a part of a bigger discussion about the thorny issue of sex in the office, ranging from Helen Gurley Brown’s seduction strategies to the persistant problem of harassment, which advice books before the women’s movement of the 1970s essentially shrugged off as a part of life, as Peril writes:

The secretarial experts repeated the same formula again and again over the decades–and it wasn’t a particularly helpful one. A secretary should avoid awkward situations with male coworkers, but if despite her best efforts something untoward occurred, she should ignore it–he probably didn’t mean anything by it anyway. (page 159)

Peril’s true delight in her research comes through in every page. She knows how to mine the humor in the truly horrifying. That includes a quote from one of her favorite advice-givers, Lucy Graves Mayo, in the 1965 book “You Can Be an Executive Secretary”:

Peril always recognizes the complex reality of the secretarial role as both a “millstone” and “stepping stone.” On the positive side, it has historically offered opportunities for women without a four-year college degree, without the hazards of the factory. On the negative side, it has symbolized a dead-end job and the limited career options for educated women who would have rather become their bosses. At the famous feminist 1968 protest of the Miss America pageant, where women threw objects of oppression into a “Freedom Trash Can,” one of the first items tossed in was a steno pad.