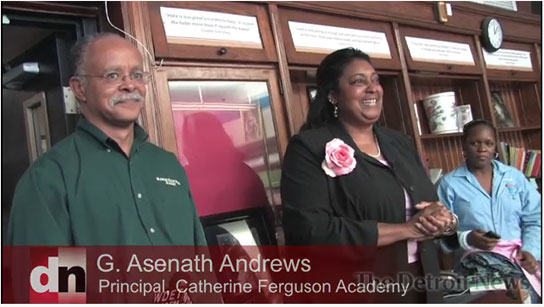 June 17 was supposed to be the day Catherine Ferguson Academy, the much-lauded Detroit school for pregnant and parenting students, would close. The news since the closing announcement had been bleak. A demonstration by students in April had been quickly quashed by police, and the community had little power as the decision to close the school was left solely to the emergency financial planner for Detroit Public Schools.

In a rare twist, good news prevailed! About an hour before another planned rally by students and members of the community to show support for the school, the announcement was made that Ferguson Academy would become a charter school, and no longer be part of the Detroit Public Schools.

According to The Detroit News, the school will be run by the Wayne Regional Educational Service Agency. The core staff, including Principal Asenath Andrews who has been principal for 27 years, will keep their posts, and the school will continue its educational programs.

Days ago, a stoic Principal Andrews mentioned she would retire after turning in the keys this week. Today, she commented that she was “relieved, excited, and pleased.”  The CFA students, faculty, and their community were finally heard, even if it was down to the last minute.