Ending the Cold War With My Father - Ms. Magazine
Skip to content 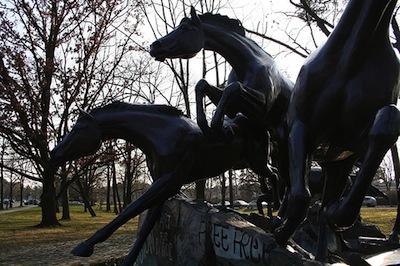 When my father was honored for his 32-year career in the CIA–a career that spanned the Cuban Missile Crisis to the fall of the Berlin Wall–he invited me to the ceremony. At 23, I didn’t know what to say. Not because his being in the CIA was new information–it wasn’t–but because we were so different. He was a loyal Cold War warrior and I was a doubter. In college, I scrutinized everything about America and its hypocrisies. Still, it was more than our political differences that got in the way. Growing up, he seemed consumed by his work, and the As on my report card were so expected they received little comment. When I was 16 and my mother died of breast cancer, I felt alone, left with a father who didn’t know me.

And yet, when he called that day, I couldn’t say no.

I found myself inside a low-ceilinged room at CIA headquarters. My father sat at the end of a row of chairs, his white hair cut Army-short on the sides. We were all dressed up: my stepmother in a gray skirt suit, my sister in a skirt and me in a rare dress. On my left wrist hung the silver bracelet that my girlfriend–someone my father knew nothing about–had given me.

I glanced around the small, windowless room waiting for the ceremony to start. There were no meat and cheese plates or decorations of any kind. Dour portraits of former agency directors lined the wood paneled walls. I felt small, as if the ceiling were pressing down on me. At the front of the room, next to an American flag, hung an oversize photograph of then-president, George H.W. Bush. A 1960s style clock had been installed above the photograph, its silver hands and numbers affixed directly onto the paneling.

The announcer stepped forward and began. I listened for clues about my father’s secret life as a spy, but the announcer spoke in abstracts–not even the countries of my father’s assignments were given. When the announcer signaled, my father rose from his chair and moved to the podium. He stood before the small group of colleagues and thanked them for coming. He seemed moved as he looked at the award, then out again at the audience. Was he contemplating his next remark, taking a moment before delivering a prepared speech? I remember he said little more. I slumped in my chair as he made his way back to our row. In his eyes, I thought, I saw all the words he had wanted to say–the toll of keeping a secret, how proud he was of his work–but didn’t.

There was so much I didn’t say back then, too.

After the ceremony, I sent him a letter saying I was gay. I had wanted to tell him for years but anticipated his disapproval. He called the day he received it. “I can’t accept this,” he said, making me instantly want to take my letter back. “But, there’s no reason for us to lose contact,” he added, surprising me.

It made little sense to bottle up as soon as I came out, but that’s exactly what I did for the following years. Sometimes I dropped clues about a close “friend,” but when my father didn’t follow up with a question or comment, I fell silent again. I dyed my hair purple and told him little about my life. The distance between us began to feel clean, complete, as if he were the first chapter in a book and I the last, the pages between never touching.

Over a decade later, when I turned 40 and planned a commitment ceremony, I called to invite him. My partner Susan and I traveled to Texas before the ceremony so she could finally meet him. The visit was strained, however, and I left more hurt than if I hadn’t gone at all.

The morning of the commitment celebration, our guests gathered on the back deck. Susan and I stood in the center of the circle, wearing rings we’d designed. Susan’s father took his place near the minister and my sister approached a tall, ivory candle and lit it in memory of our mother. When the minister began, Susan’s mother started to cry. A friend sang Paul McCartney’s Calico Skies and Susan’s nine-year-old nephew played a song on the violin he had practiced for months. Susan and I blessed our guests and they blessed us. But my father was not there.

I don’t remember when he and I first talked after the ceremony but we eventually did. Slowly, we fell back on old topics–my job teaching, our cats, the weather. Years passed.

Then, not long ago, I published a personal essay in the newspaper. In it, I told the story of how I first learned my father was in the CIA and what it had been like to be told cover stories for years. My father and I had begun a series of conversations by then–about his work, our family–and my article had come out of these. These conversations healed much of the distance that had accumulated between us.

I showed him the piece before it ran. “It’s your story to tell,” he said at first, but then grew apprehensive. We went back and forth on the phone, negotiating changes pertaining to the specifics of his career. He never told me not to publish it. Still, I took sleeping pills at night and fought with myself during the day. I tried to hold to the spiritual principle Susan and I believed, that all beings are connected in love. I had not written my essay from a place of anger. Indeed, the process of writing it had transformed me, helping me see my father as a human being with principles, aspirations and flaws of his own.

After the article ran, I received emails from readers from all over the world. Many praised my father’s sacrifice. Others related to what it must have been like to have a parent in the CIA. I forwarded one of the emails to my father, but he didn’t seem receptive so I didn’t send him any of the others. We didn’t speak for months.

Half a year later, my father wrote a book about the Cuban Missile Crisis, his earliest assignment with the agency. “I’m very interested in your comments,” he said, after it was published. I was flabbergasted. He wanted my opinion? I read and carefully re-read. It was academic but surprisingly critical, open. I told him it was a fascinating insider account. Just as I hoped he had seen me in my article, I wanted him to know that I was at least trying to see him in what he wrote.

The following summer, Susan and I traveled to Texas for a family wedding. I wasn’t sure my father would want to see us but he did. The day of our visit, he and I meticulously reviewed the directions to his house. It didn’t matter that we had a GPS on our phone; he insisted on meeting us on the freeway and guiding us. “There’s a big a game in town. It’s gonna be a zoo,” he explained.

Like a page out of a spy novel, Susan and I approached the agreed-upon highway exit and pulled to the side behind my father’s mid-sized American car. He gave a quick wave and led us off the shoulder and down the exit ramp to a Marriott Residence Inn Suites, where he’d arranged a room for Susan and me with credit-card points. He pulled into a spot and I watched him get out of his car, cane first, one leg, then the other and finally a giant push to standing. I stepped toward him for a hug. He was still tall and imposing, with a slight Buddha belly, but he looked older. I was shocked by how fragile his body felt. Tears welled up after we hugged and so I looked away, missing the warm embrace he gave Susan.

After checking us in, my father waited in the car while we put our things in the room. We wheeled our bags down the hallway, clicked into our room with the card key and stepped into a spacious, light-filled suite. “Wow,” Susan said. I followed her eyes. In the middle of the room was a king-size bed. One bed. Not two.

Back outside, Susan and I got into the rental car and followed my father out of the retail area. A minute later, he called to see if we wanted to stop by the Bush School of Government and Public Service, where he’s a teaching fellow. “Sounds great!” I said.

The parking lot was empty when we arrived. My father pulled alongside us; his passenger window lowered smoothly. “That’s where I teach,” he said. His watery blue eyes stayed hidden in the shadow of his baseball cap. He pointed out the conference center, school and library. I squinted at something in a central courtyard. “That’s a real piece of the Berlin Wall!” he shouted enthusiastically, seeing where my eyes had landed. “I want to take a photograph,” I yelled back. “Great!” he said.

Susan and I got out of the car and made our way over to the sculpture–a handful of bronze Mustangs in mid-leap over a piece of graffiti-covered concrete. They were fierce and beautiful, nostrils flared and eyes blazing. They seemed ready to leap from the platform, to run forever under the wide Texas sky. I wished I could join them. Beneath the sculpture, a plaque read, “The Day the Wall Came Down.” The symbolism was unmistakable. Freedom had leaped over the rubble of Communism.

I wondered why my father had brought us here. Was it to share where he spent his days researching and teaching? Pride of self, pride of work? It felt like something more. As if the buildings and sculpture were proof of what he had spent his life doing, of what had been hidden for so long. In an age of nonstop information, combative pundits, histories told and retold depending on who is doing the telling, the sculpture stands immovable. A reminder of the most compelling accomplishment of his career–the fall of the Berlin Wall and the end of the Cold War.

Things have changed between my father and me since that day inside CIA headquarters. He seems to have accepted my relationship with Susan. And though still a doubter, I have come to better understand his work and am proud of his service to this country. Now, whenever I think of those bronze horses in the Bush School courtyard, it’s not the wall of Communism I imagine them leaping over but another wall.

The one that used to stand between me and my father.