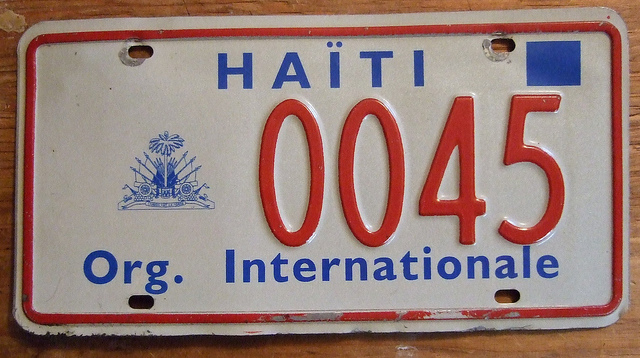 Earlier this week, the Ms. Blog interviewed journalist Mac McClelland regarding the much-discussed online article she wrote about dealing with PTSD after a reporting stint in Haiti. One of our Ms. bloggers wanted to weigh in with her thoughts about the controversial story.

As a Haitian American feminist anthropologist who has written much on both gender-based violence in, and representations of, Haiti, I have been following the Mac McClelland controversy with great interest.

McClelland, a Mother Jones reporter, recently wrote for GOOD magazine her personal story of suffering PTSD after witnessing the emotional outburst of a Haitian woman who had been gang raped. What was most provocative about the story, though, was embodied in the headline: “I’m Gonna Need You to Fight Me on This: How Violent Sex Helped Ease my PTSD.”

Because I believe dealing with experiences of trauma is a highly subjective process, I won’t question her chosen method of healing. She need not be judged. Besides, much is written about women’s fantasies of rape, starting with the groundbreaking and controversial work of Nancy Friday; the reporter is not unique in this regard. The difference, however, is that she refused the closet and publicly exposed her desire, couched in terms of it being an antidote to her mental suffering and her need to feel re-empowered.

That said, her essay–and responses to it from both critics and supporters–reveal much about the messiness of race, class and gender, and show us yet again how much Haiti is popularly misperceived.

McClelland insists that in this piece, she did not set out to affect the well-being of the world she writes about, as she has in her other work. Rather, this confessional essay was all about her descent into an abyss, her way back from it and how she lived to tell about it. Do I fault her for this emphasis on herself? No. But I do understand the criticism she’s received from others for using Haiti as a mere backdrop, such as Haitian reporter Marjorie Valbrun, who reminded her that “what’s happening in Haiti is not about you.”

Valbrun calls out white journalists in general, and McClelland in particular, for a “woe-is-me” attitude that obscures the bigger problems they encounter on assignments. Haiti, like other troubled countries, becomes just a scene in an all-too-common Hollywood script. The issue of “using” Haiti was also raised in a letter to the editor of GOOD, published on Jezebel.com, that was signed by 36 women journalists and researchers (including Valbrun) who have tons of Haiti experience under their collective belt. The writers particularly called out McClelland for her lack of context:

We respect the heart of Ms. McClelland’s story, which is her experience of trauma and how she found sexuality a profound means of dealing with it. Her article calls much needed attention to the complexity of rape. But we believe the way she uses Haiti as a backdrop for this narrative is sensationalist and irresponsible.

This use of Haiti makes the republic a casualty of her healing process. When Valbrun took on McClelland again, in “Haiti Made Me Do It” on TheRoot.com, she decoded the ways the journalist “blames” Haiti for her trauma. Because McClelland’s experience in Haiti–particularly when she witnesses the breakdown of the gang-rape survivor–is what evoked her trauma and rape fantasies, Haiti is set up as the culprit. As Valbrun says:

[McLelland describes] rapes by marauding, “gang-raping monsters” in the tent camps that house homeless earthquake victims. Rapes at the camps are indeed a tragic reality of post-earthquake Haiti, but she paints a picture of Haiti as the site of collective male wilding. Never mind that she’s only talking about the capital, which before the earthquake had some 3 million residents, and not the entire country of 10 million.

Imagine for a moment that this incident had occurred in Stockholm. The very element of deviance that gives McClelland’s story its bravado and caché would have been entirely lost, because Sweden is known as a peaceful and sexually open society where the rule of law is abided. On the other hand, Haiti is understood primarily as a dark, chaotic place where bad things happen.

McClelland does not mention in her recent essay that at the time of the incident (September 2010), she actually live-tweeted about it, even disclosing the rape survivor’s real name in her original tweets. Mother Jones re-posted those tweets using just the victim’s initials, describing it as “real-time reportage.” In McClelland’s blow-by-blow account of the moment, you can almost feel the adrenaline–but who’s the victim here? In addition to other criticism, McClelland has taken flack from peers concerning issues of consent, protecting informants and the ethics of journalism, especially in new media. (For critical response to those tweets, check out reporter and producer Jina Moore’s pieces “Should We Tweet Rape?” and “A Roundup of Ideas on Tweeting Rape.”)

Do I think that criticisms of McClelland have turned her into something of a scapegoat? Yes. She certainly is not the first reporter to portray Haiti as a dark and chaotic place and she won’t be the last, as a writing colleague of hers, Ansel Herz, wrote in her defense. I completely agree. (For example, veteran journalist, Amy Wilentz, who also signed the Jezebel.com letter, not too long ago metaphorically referred to Haiti as a pile of shit in The New York Times.) But should McClelland get a free pass because, as she says, this was not a reported piece about Haiti but an essay on her personal issues? Absolutely not.

In the fall, I’ll be teaching a seminar on reflexive anthropology entitled “Beyond Me, Me, Me,” and I can’t help but think that McClelland’s piece might serve as an example to discuss. Although it’s journalism, not anthropology, her essay could be seen as work that loses sight of the social context while focusing solely on an individual’s personal experience in the study of culture. In anthropology, such work is critiqued as navel-gazing that won’t serve a broader purpose. To be fair, McClelland, as a journalist, does shed some light on a larger dilemma that all female journalists may face in threatening situations–sexual harassment and assault–but aside from that her essay is all me, me, me.

Reflexive anthropology is important, as it calls for a more self-critical and self-reflective approach that examines power relations in fieldwork. Indeed, many early researchers treated their “informants” as though they were just that–sources of information, rather than human beings. That, and the swashbuckling overtone in the work of many early anthropologists, was decried by leftists, feminists and other minorities, who wanted to decolonize the discipline. (These issues are at the core of my first book). It’s hard not to see that old swashbuckling tone in McClelland’s piece, as she suffers-but-soldiers-on despite the violence and the predatory men she encounters. Haiti, in that sense, becomes the last frontier; it ceases to be about the people and the human rights issues, and becomes just another a terrain to be conquered.

The Atlantic Wire reporter Elspeth Reeve, another supporter of McClelland, wants us to believe that McClelland’s Haiti critics are  just too sensitive. As she put it, the critics feel that “reenacting rape is fine, just don’t call Haiti a hellhole.” To bolster her argument that Haiti still is such a horrible place, her piece includes a couple of photographs of flimsy tents in a Haitian refugee camp and of men carrying guns.

Honestly, we don’t need to see any more pictures about Haiti. Everyone knows and agrees that Goudougoudou shattered an already fractured country that already had little to no infrastructure. The affected areas, in too many ways, are still a mess. Hunger and cholera continue to wreak havoc. The state barely functions while NGOs rule but fail. Haiti should not be reduced to solely its conditions, yet without violence, gangs and rapes there is no Haiti story. And without our victim status, we Haitians have no allies. Therein lies our biggest dilemma.

Given the poverty of the government, people in need in Haiti are forced to rely on organizations that are pitted against each other (at both local and global levels) for resources. The gender-based violence field is also competitive, which fuels a value system based on a hierarchy of horror: The more horrific the story, the more attention it gets and the more likely that the victims in the story might get access to limited support. Progressive Haitian organizations are in trouble precisely because they refuse to be dependent on foreign NGOs. They are not even courted, because partnerships in the aid business are code for “as long as we hold the pursestrings, we determine the solutions.”

So much more could be said, but I will stop here. Except for one more thing:

Since this story broke, the issue of Haiti’s representation has become a key focus while the trauma of the woman McClelland calls “Sybille” has been swept aside. While I’m sympathetic to the trauma McClelland faced, I can’t help but thinking back to “Sybille”–the woman who, it turns out did not want her story told, whether in tweets or an article. In fact, according to Haitian-American writer Edwidge Danticat (also one of the 36), “Sybille” wrote a letter of protest to McClelland. (So no, Pandora Young, the “politically correct female journos”–as you dubbed them on FISHBOWLLA–are not “ganging up on the PTSD essayist,” but instead speaking up for this and other “Sybilles.”) For me, this moment brings the question of access and power of  journalists to the table: Who gets to tell someone’s else story? How? And what happens when the subject talks back?

The conversations that have ensued around this essay are important and overdue. People are actually talking about the roles of Haiti’s allies–how do they see and represent Haitians?  Such conversations tend to stay behind closed doors, where they might be safer, but now they’re out in the public sphere. And we don’t all agree on everything, but we are all concerned about our rights. Without such public discussions, the undisclosed tensions threaten to reinforce the very problems we all seek to solve. These discussions are a very crucial first step toward productive solidarity work. It is my hope that we have the courage to move beyond this stage and have the most important conversation of all: the conversation about solutions. Haiti desperately needs a non-partisan space where Haitians from all walks of life, along with their committed allies, can work together to gather, assess and rigorously analyze gender-based violence in the country. Then we can take the next step to collectively address and eventually eradicate it.

Photo of license plate used by foreign international organizations in Haiti, from Flickr user woody1778a, under license from Creative Commons 2.0.