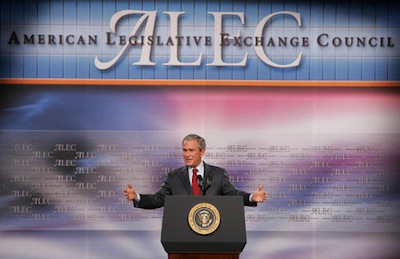 Elected officials often talk about “mandates” from their constituents. But what happens when those mandates aren’t coming from voters but corporate representatives who pay top dollar to hobnob with state lawmakers and help draft “model” bills reflecting corporate interests?

That’s precisely the modus operandi of the American Legislative Exchange Council, an under-the-radar nonprofit that bills itself as non-lobbying and nonpartisan, dedicated to business deregulation and limited federal government. Known as ALEC, it’s less smoke-filled back room and more sunny golf course, but the principle is the same. State legislators pay a minimal annual membership fee of $50 to meet three times a year with representatives from some of America’s richest corporations, which have paid ALEC millions over the years for the opportunity to counsel these public officials on legislation they’d like to see enacted. Wal-Mart, ExxonMobil, Philip Pfizer and AT&T are among the corporate giants with representatives who serve or have served on ALEC’s private-sector board.

“[ALEC is] a massive impediment to participatory democracy,” says Ohio-based anti-ALEC organizer Aliya Rahman. It ensures, she says, that wealthy people and corporations decide “which questions get asked and what the terms are.”

One of ALEC’s top 2011 priorities is to use state-level legislation to eviscerate the Obama health-care-reform bill, which would grant Medicaid coverage to 16 million more Americans by 2019. Claiming that the Medicaid expansion would “cause damage to already-strained state budgets,” ALEC’s 2011 “Guide to Repealing ObamaCare” suggests that states slash existing Medicaid benefits or opt out of Medicaid entirely. But current budget shortfalls are just the latest excuse: Medicaid has been in ALEC’s crosshairs for the past decade.

ALEC model legislation leaked to Ms. magazine gives states a blueprint for receiving federal Medicaid funds as “block grants” rather than entitlements. An entitlement guarantees coverage to people who are eligible; block grants are a fixed “block” of money, letting states cut off previously eligible recipients or freeze enrollment. Since Medicaid helps low-income pregnant women, the elderly in nursing homes (most of whom are women and two-thirds of whom are Medicaid-funded) and disabled children and adults, you can imagine the consequences: a 90- year-old woman evicted from her nursing home, an autistic child no longer given aid, a young pregnant woman unable to afford prenatal care.

The state closest to passing such block-grant legislation is Texas,where a Republican lawmaker has proposed two bills that follow ALEC’s Medicaid agenda. The first of state Rep. Lois Kolkhorst’s bills would allocate Texas’ Medicaid funding as block grants; her second would allow Texas to opt out of Obama’s health-care reform regulations entirely. If passed, both require federal approval.

An ALEC representative told Ms. via e-mail that it has had “no involvement” with Texas’ attempt to defund Medicaid. But Kolkhorst was listed in 2003 as a member of ALEC’s “Commerce and Economic Development Task Force,”and she drew inspiration for her legislation from the Texas Public Policy Foundation, a conservative nonprofit with longstanding ties to ALEC.

Such legislation is to be expected from ALEC, however, says activist Rahman: “[ALEC] puts profit above people. Profit above human rights.”

Photo of former President Bush speaking at an ALEC meeting from the White House archives.

The Inflation Reduction Act Is a Much-Needed Win for Women