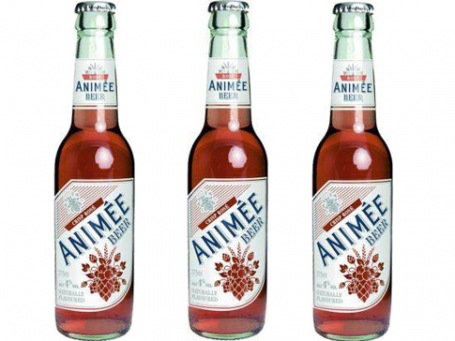 It seems ad execs at Molson Coors were looking for a new way to include women. With only 17 percent of Molson Coors’ sales coming from women, company heads knew they had to do something.

In essence, Molson Coors has kept the doors locked on its “no-girls-allowed” beer clubhouse, but poked its head out to say, “Hey look! We set up a crappy flowered tent next door. You guys can hang out there.”

The new “beer” comes in three different flavors, clear filtered, crisp rose, and zesty lemon. Molson Coors understands that women would never be interested in drinking beer that tastes like beer. We only drink chardonnay and wine coolers. Guardian columnist Melissa Cole, who taste-tested Animee, writes, “If anyone can identify anything even approaching a normal beer flavour in any of these drinks I’ll eat my hat.”

Product development heads at Molson also know the best way to market to women is to make us self-conscious about our bodies. So their new brew is low-cal and “bloat-resistant.” (What this pseudo-scientific advertising claim actually means is unclear.)

The irony is that for a moment there, it seemed Molson had actually caught onto the fact that they (along with most other beer companies) have been alienating women for decades. A woman spokesperson for the brewery said:

One of the things we need to recognize in the industry is that we’ve effectively ignored 50 percent of the population for many years. There’s something fundamentally wrong with the relationship women have with beer.

If Molson Coors needed help rectifying this, instead of pinkwashing their product, they could have looked at recent marketing survey findings. The number one reason women said they don’t buy beer is because they’re put off by the “inherent sexism in [its] advertising and marketing.” Surprisingly, “beer is an ugly shade of yellow-brown” was nowhere to be found on the list of women’s hangups.

So while Molson Coors claims to have seen the light, this recent product launch proves they’re still as clueless as ever. All I want to know is: Was everyone at Molson Coors drunk when they thought up this latest scheme?