Front of the Bus - Ms. Magazine
Skip to content 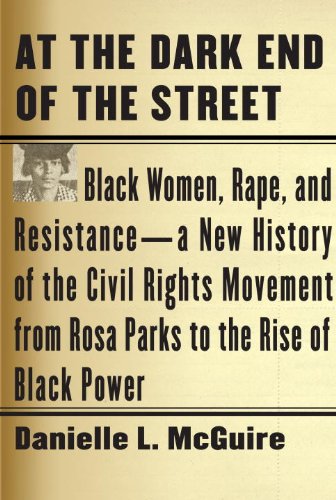 Danielle L. McGuire’s At the Dark End of the Street: Black Women, Rape, and Resistance–A New History of the Civil Rights Movement from Rosa Parks to the Rise of Black Power offers a vital retelling of the by-now familiar history of the civil rights movement: an often-triumphant tale of heroes who, through acts of bravery, forced a nation to confront and better itself. Full of lively, if difficult, storytelling, and buttressed by excellent research, McGuire’s provocative narrative forces readers to rethink what they know about that pivotal moment in U.S. history: its time frame, its actors, its legacy. Placing black women’s struggles against rape and sexual violence at its center, McGuire powerfully demonstrates that women’s “bodily integrity” was always a key goal of the movement.

From her description of the brutal gang rape of Recy Taylor in 1944 to her closing discussion of the 1975 case of Joan Little, on trial for murdering her jailer as he raped her, McGuire argues that black women organized tirelessly for the right to human dignity. Rosa Parks did not begin her activist career by refusing to give up her bus seat in December 1955; rather, she had long worked as an investigator for the Montgomery NAACP, organizing for the prosecution of the numerous cases of white men’s rape of black women. Likewise, the countless African American women who participated in the Montgomery bus boycott, often described as the start of the movement, did so not simply to counter Jim Crow. They boycotted for more than a year because, as the overwhelming majority of Montgomery’s bus ridership, they were sick of being physically molested and verbally abused by white bus drivers, police officers and other riders. From Montgomery to Birmingham to Selma, black women were at the frontlines of the movement, and their long refusal to remain silent put sexual violence at the frontlines as well.

Protection of women’s bodies does not always translate into feminist sensibilities. The white supremacist history of whites lynching black men in the name of protecting white womanhood, while white men raped black women with impunity, shows how “protection” can just as easily be patriarchy. Likewise, the call to “protect black womanhood” at times became a means for black men to reassert dominance by reclaiming traditional gender roles.

While McGuire mentions a few such instances, she missed opportunities to consider fraught intraracial gender relations. Still, her book is an important intervention in our commonsense understandings of the civil rights movement.

Through decades of persistent activism starting in the 1930s, long before second-wave feminism took on sexual violence in the 1970s, black women made rape a civil rights issue. That lesson about the inextricability of antiracism and anti-sexism is one we would do well to remember in our contemporary moment. McGuire’s book reminds us that there is still much to learn about the movement–and that there is much unfinished business.

Excerpted from the Fall 2010 issue of Ms. To have the new Summer 2011 issue delivered straight to your door, join the Ms. community.

Leigh Raiford, an associate professor of African American studies at the University of California, Berkeley, is the author of Imprisoned in a Luminous Glare: Photography and the African American Freedom Struggle (UNC Press, 2011).