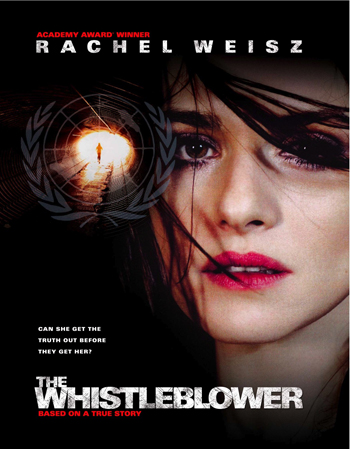 The book version of The Whistleblower provided a harrowing, page-turning account of sexual trafficking in post-war Bosnia, revealing how the private military contractor DynCorp, the United Nations and the U.S. State Department were complicit in hiding, as well as perpetuating, the global sex trafficking industry. The film adaptation now out in theaters, with an original screenplay by two women writers, does not go into the same level of detail as the book, but nonetheless provides viewers with a gritty, tormenting view of the complex, corrupt world of sexual trafficking.

Rachel Weisz does an excellent job playing Kathy Bolkovac, the former Nebraska police officer who signed up for an international peacekeeping mission in 1998. As the movie details, Bolkovac uncovers an extensive sexual trafficking ring that thrives due to the patronage of male soldiers, U.N. workers and private contractors.

The film offers a gut-wrenching portrayal of sexual trafficking, including the extreme sexual violence and torture that trafficked women and girls are subject to. Bolkavac puts not only her job but her life on the line in her attempt to bring attention to trafficking, police/military collusion, and the U.N. failure to do anything about it. Though she successfully brought the issue to public attention through meticulous documentation in a U.K. court case, the diplomatic immunity of international workers meant that very few people were prosecuted. Sadly, to this day, not much has changed.

The film is  most successful in humanizing an issue–sex trafficking–that is often told via statistics. Weisz is particularly strong in her portrayal of a brave woman who refuses to remain silent. The film also brings war-torn Bosnia to life, contrasting the corporate, shiny U.N. offices to the sordid bars, bombed-out landscapes and isolated borders, where those on patrol seemingly care nothing for the girls and women trafficked on their watch.The movie  hints at how the predominantly male world of “peacekeeping,” and the immunity such international workers enjoy, is part of the same web of inequality that leads people to look the other way when faced with sexual slavery.

It’s not just in Bosnia that such things occur, either. As Bolkavac notes in her book, DynCorp, the private contractor she worked for that was so embroiled with sexual trafficking, has been awarded billions of dollars in contracts to “police” Iraq. The corporation has moved its legal jurisdiction to Dubai, giving itself more “immunity” than ever. And, many of the men that Bolkavac blew the whistle on continue to work for DynCorp.

The ACLU recently filed a lawsuit pertaining to trafficking in Iraq and Afghanistan where, according to its website, “More than 70,000 low-wage workers, commonly known as third country nationals or ‘TCNs,’ work for U.S. military contractors.” The ACLU alleges that “many of these workers often end up on these military bases through a convoluted system of sub-contracting rife with corruption, debt bondage, coercion and other abuse.”

Allegation of trafficking and U.N.-contractor involvement have also been brought forth in the Congo, Nigeria, Liberia, Haiti, Columbia, Sudan, Iraq and Afghanistan, to name a few. Yet contractors such as DynCorp, Halliburton, and KBR continue to be awarded lucrative contracts, despite the mounting evidence they are intimately involved in sex trafficking.

While The Whistleblower sheds light on this global problem, I do wish the film would have revealed how gender dynamics shape not only the trafficking world but the policing world–including the U.N. While books inevitably have to be truncated when adapted into film, the film leaves out the sexual harassment Bolkavac experienced as a woman in her male-dominated field. Showing that would have revealed how the underlying systems of patriarchy and militarism inform gender inequality, allowing for workplace harassment on one end and sexual trafficking on the other.

Thus far, the film has drawn mixed reviews. Peter Suderman is dismissive in his Washington Times review, snidely calling the film “a sort of global feminist take on Serpico” that “ends up playing more like a very special episode of Law & Order: Bosnia.” He claims that:

despite the story’s real-life origins, the narrative has been hammered into an all-too-familiar form: Naive but strong-willed protagonist with a strong sense of righteousness? Check. Callous overseers whose only concern is maintaining public appearances? Check. Sneering colleagues on the take who brush off the protagonist’s inquiries? And check.

I wonder if his condemnation would have been as swift had this not been a female-focused film, helmed by a team of first time female screenwriters and a female director. His statement that the film “is a movie that labors to be taken seriously” could, given the tenor of his review, echo the notion that women (and their films) are hard to take seriously. I wonder if a review of a male-focused and -directed film would suffer the same level of scrutiny.

At the other end of the spectrum, The Observer claims we should “quickly add” the film “to the short list of this year’s must-see movies,” describing it as “a grisly, authentic, meticulously researched, pulse-quickening political chiller about a hot-button topic that will keep you on the edge of your seat from start to finish.”

In keeping with the more balanced tenor of the NPR review, I fall somewhere in the middle. The film does, at times, suffer from a formulaic feel, but also offers a realistic depiction of the horrors of sexual slavery and the corruption that allows it to prosper. Noting that recent male-directed films such as The Help “tell their stories of social injustice politely,” NPR’s review champions The Whistleblower for showing “no such reserve, depicting rape, torture and other male violence with stomach-churning realism, and giving no quarter to the peacekeepers who exploit those who are depending on them for protection.”

Will a film such as this, which is about as far as one can get from Hollywood’s feel-good fodder, succeed in drawing audiences? It would be great if it did, because the global problem it portrays deserves far more attention.

For an excerpt of the book, go to Women’s E News here.

Promotional poster for The Whistleblower.