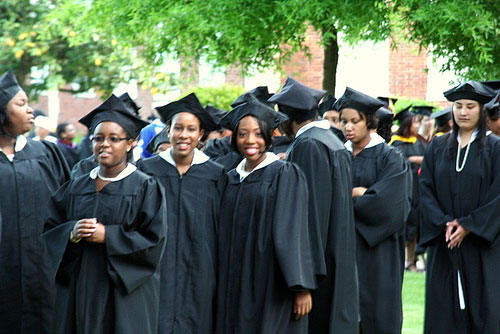 Ever since I made my decision to attend Wellesley College, I find myself having to defend it to most of my high school classmates. Many of them know nothing about the school, and when I tell them about it they ignore its academic reputation and amazing alumnae. To them, it is simply a women’s college. And since I’ve decided to go there, they have surmised that I must hate men, am a lesbian or am doomed to life as a crazy cat lady.

It gets tiresome hearing my classmates’ reasons why I shouldn’t go. One boy even told me, “You won’t know how to interact with men past the age of 18.” (Forget the fact that I will have male professors and will interact with some of the thousands of male students at surrounding campuses.) Since I’ve also heard that women’s colleges are somewhat controversial in the feminist community, I thought I’d examine these reactions and the issue in general.

Perhaps I should explain why I chose to go to a women’s college. I applied and was accepted into both co-ed and single-sex schools. I ultimately chose to go to a women’s college because I was amazed by the strong community I found there and the notable accomplishments of previous graduates. Clearly, women’s colleges prepare women well for the world and encourage them to be passionate about what they choose to do. Of course, I understand that a same-sex college is not necessarily appropriate for every woman, but I do believe there are great advantages to attending one, if the college is a good fit.

Only 2 percent of college-aged women choose to go to women’s colleges, but those who do have overwhelmingly positive results. In spite of these positives, there is somewhat of a backlash against them. One of the common arguments I hear is that they are antiquated institutions. As the Women’s College Coalition explains:

The formal education of girls and women began in the middle of the 19th century and was intimately tied to the conception that society had of the appropriate role for women to assume in life.

But the need for these colleges has evolved over time, and now they hardly seem old-fashioned. The progressive mindset of these colleges helped educate many impressive women, including two icons of feminism, Gloria Steinem (Smith ‘56) and Betty Friedan (Smith ‘42), as well as some of the most powerful women in government: Hillary Clinton (Wellesley ‘69), Madeleine Albright (Wellesley ‘59) and Nancy Pelosi (Trinity ‘62).

Another opposing opinion states that women’s colleges no longer have a place in our world with the abundance of co-ed colleges, and that by continuing to exist are promoting sexism through segregation. But I see women’s colleges as filling a void that sexism created in the world, where women don’t get called on as often by professors and have to fight to be heard. I doubt many would be able to say this is no longer a problem. Women’s colleges are inherently feminist, not sexist, because they believe in advancing women’s position in the world. To those who then counter with, “Why aren’t there more colleges exclusively for men?” I answer, “Because men are not at a disadvantage in the common classroom or greater society and so there is no real need for all-male colleges. And yet, some still exist.” One day, women will hopefully be on equal footing with men and the remaining women’s colleges can go co-ed. However, that time has certainly not yet arrived.

When I graduate in four years, I doubt I’ll have had the cobwebby, sequestered experience my classmates envision for me. Rather, I’ll have years of practice speaking my mind and standing up for what I believe in–starting with my belief in women’s colleges.