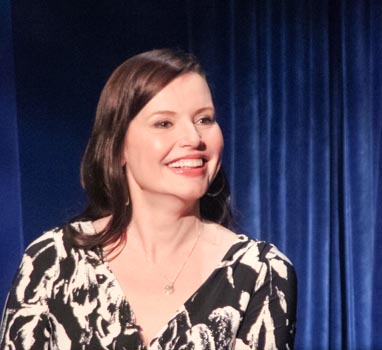 Geena Davis is a powerhouse actor, best known for her strong and often comical roles in such Hollywood films as Thelma & Louise, A League of Their Own and The Accidental Tourist (for which she won an Academy Award). We love her consistent portrayal of strong women who take charge of their own lives, including her too-short stint as the first woman U.S. president, in ABC’s Commander in Chief (rest in peace, beloved drama).

But we heart Davis for more than just her screen roles (and for her decision to take up Olympic archery at age 41!). We especially appreciate her work at the Geena Davis Institute on Gender in Media, where she seeks solutions to gender inequity in children’s programming.

This Monday, a few Ms. bloggers had the opportunity to hear Davis speak with Pat Mitchell at The Paley Center for Media about her quest for gender-balanced programming. Passionate and articulate, Davis shared how she came to recognize the unbalanced gender representation in her daughter’s favorite TV shows:

My daughter was about 2 (she’s 9 now) and I started watching little kids shows and G-rated videos with her and it really struck me how few female characters there seemed to be. … I started counting the characters while we were watching. I knew there were far fewer parts for women in movies in general, but that we would be showing that to kids was sort of a revelation.

When she would mention this information to others, she was often met with incredulity. Surely this wasn’t happening in the programming of today?

[It] made me realize that if I wanted to actually have an impact I should probably have the numbers … the actual data to show people, and it kind of snowballed into a whole institute.

Six years later, the Geena Davis Institute is rolling out data on gender representation in children’s programming, lobbying for legislation such as The Healthy Media for Youth Act and establishing See Jane, a program that uses research to work with entertainment creators to make positive changes.

Some of the data Davis has found is astonishing:

But Davis is quick to point out that the problematic media can also be a part of the solution:

That’s right! I want to see more journalist heroes that are women and girls. Heck, I’ll even draw the cartoons! We heart you, Geena Davis Institute on Gender in Media. Keep it up!