Struggle Hasn’t Changed for ‘The Help’ of Today - Ms. Magazine
Skip to content 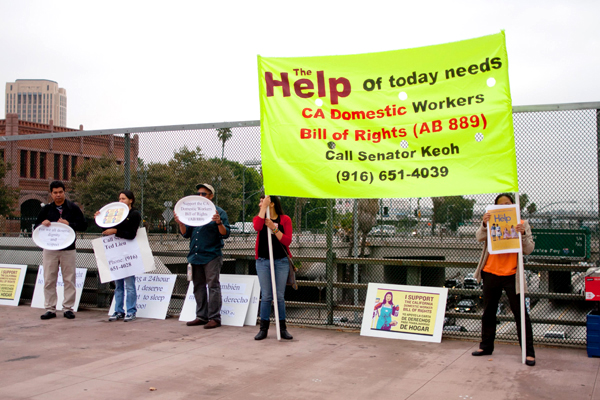 When The Help opened this week, hundreds of thousands of theatergoers were swept up by the story of domestic workers struggling for dignity and respect in Civil Rights-era Mississippi. Those viewers might be surprised to learn that across Chicago and America, modern domestic workers are living out that struggle today.

The Help tells the story of two African-American domestic workers who provide indispensable childcare and house cleaning for an upper-class white family in the face of constant mistreatment and humiliation by their employers. By telling their stories to an aspiring author, these courageous women change the public narrative of domestic work by exposing the injustice of their employers’ racism and classism.

When Franklin Delano Roosevelt signed the National Labor Relations Act in 1935—the law that provides basic labor protections to most workers—domestic workers were excluded. At the time, domestic workers were overwhelmingly African-American women, and Southern senators refused to allow passage of the Act unless it left them out.

Today, many domestic workers are immigrant women of color. But their vulnerability and lack of legal protections haven’t changed.

“I work from 8 to 6 every day, five days a week. I do not get paid overtime. Sometimes they ask me to stay longer because they have a party, or they need to be somewhere,” says Lora, a domestic worker living in Chicago whose name has been changed to protect her privacy. “I don’t have a written contract. You can say we kind of had a verbal agreement about hours, kind of work. But that doesn’t mean anything, everything changes all the time.”

In spite of abuse and exploitation, brave domestic workers like Lora have stood up to organize for their rights and those of domestic workers around the country. And with the help of organizations like the National Domestic Workers Alliance, they’re making progress (see video below).

After six years of organizing by domestic workers—together with unions, employers, clergy and community organizations—the New York State Legislature passed a Domestic Workers Bill of Rights in July 2010. Now California has the chance to do the same.

The California Domestic Workers Bill of Rights—which passed the California State Assembly on June 2—would provide domestic workers with the basic rights that the heroines of The Help went without: rights to a safe and healthy workplace, worker’s compensation, overtime pay and the right to choose their own food.

Here in the Midwest, a domestic worker rights’ movement in the mold of New York’s and California’s is being born. This year, Latino Union of Chicago began an initiative to organize domestic workers to create just conditions in the workplace, home and community. The organization is one of 30 local organizations across the country that are conducting the first national research study to document the working conditions of domestic workers. The data will be used for future advocacy campaigns—such as an Illinois Domestic Worker Bill of Rights—to increase labor protections for domestic workers.

During a recent weekend screening of The Help convened by the Latino Union, Digna, a domestic worker from Chicago’s northwest side who requested the use of only her first name, could easily relate to the abusive conditions faced by the main characters, and the need to change them.

Before and after the screening, workers like Digna distributed flyers to moviegoers about their efforts to support domestic workers locally. The supportive responses they received from strangers brought them hope.

“Today, our joint efforts are clearly pointing toward a growing public movement of native-born and immigrant domestic workers who demand recognition and respect for the vital work of care that we human beings need all our lives,” stated Mechthild Hart, a domestic worker advocate and professor at DePaul University.

The Help offers more than just two hours of thoughtful entertainment, and more than just a fictionalized glimpse of the past. It offers a window into the vulnerabilities of hundreds of thousands of domestic workers in 2011—the workers who make all other work possible.

It also reminds us that we have the power to change them. Aibileen and Minny, the lead domestic workers in The Help, would be proud of this growing worker-led movement for dignity and inclusion.

Reprinted from In These Times

Photo of a rally by the California Domestic Workers Coalition by Sarah Richardson.