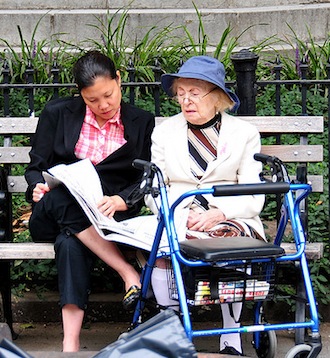 Job creation is the word of the day. In his speech on Thursday night, President Obama outlined his proposal to reinvigorate a stagnating economy. It included a mix of tax cuts, aid to small businesses, federal money for infrastructure projects and a commitment to the public sector. The goal, quite simply, is to put Americans back to work.

Jobs are indeed the best route out of our economic quagmire. With secure, well-paying jobs, Americans will be able to cover their monthly mortgage bills and will be paying taxes into the public coffers rather than drawing from them by relying on unemployment compensation or other state benefits. And the heart of the jobs programs currently being discussed—infrastructure jobs—addresses one critical sector of the American workforce.

Obama also highlighted another key sector when he stressed reinvesting in our public education system and hiring teachers to improve the lives and outcomes of K-12 students. According to the National Center for Educational Information [PDF], 84 percent of K-12 teachers are women, and that number continues to rise.

But this country is going to need more. A gaping hole in the American workforce today is the shortage of care workers. By this I mean people who are taking care of children, the disabled, and the elderly—what was historically considered women’s work.

There is a “care crisis” in this country. Countless families struggle every day to piece together less-than-perfect care arrangements so they can go to work and still fulfill their household responsibilities. According to one study, the percentage of Americans caring for an aging parent tripled since 1994. That number will skyrocket over the next two generations as baby boomers age. The number of people over 65 is expected to double by the year 2050; many of them will require at-home assistance. Last July, the National Domestic Workers Alliance launched a “Caring Across Generations” campaign that will fill this need by training workers, raising wages and working standards, providing tax credits to families hiring caregivers and giving legal status to those workers filling occupations where there is a shortage of workers.

While our physical infrastructure—roads, bridges and schools—must be built or rebuilt, we also need to repair and maintain the social infrastructure that keeps Americans working. Getting to work requires not only a well-paved road. It also requires the peace of mind that our loved ones are well taken care of. Raising the next generation of citizens demands quality teachers and safe buildings, but it also requires parents who are not so overextended that they cannot spend time with and provide academic and moral support for their children.

We don’t live in an era of full-time homemakers or extended family residing down the street, as was the case for many communities in the early 20th century. As we think about reviving our economy and putting people back to work, central to the discussion should be early childhood education, elder care and day care. In addition to creating jobs, we also need to find and pay workers—adequately—to fulfill the shortage of care workers. There is work to be done. The question is: Who’s going to do it?

Photo from flickr user Ed Yourdin under Creative Commons 2.0
This blog is part of the #HERvotes blog carnival. Read more HERvotes posts by Ms. and other women’s groups.