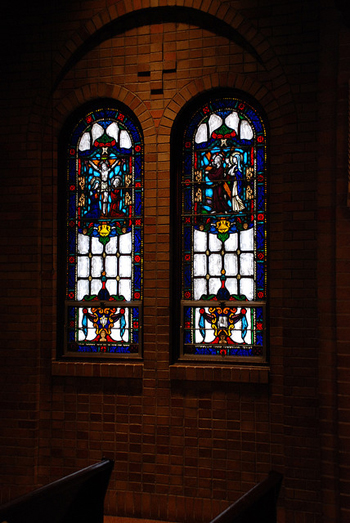 For eight years, I walked through the doors of my Catholic elementary school under the words “Suffer the little children to come unto me.”

I haven’t thought about my grade school, Patronage of St. Joseph, in a very, very long time. But as I listened the other night to Barbara Blaine, founder and president of SNAP (Survivors Network of those Abused by Priests), describe the first time she was molested by a priest, the image of those doors and that biblical passage came rushing to my mind.

Blaine, like too many other young Catholic girls and boys, was betrayed by a priest–the very adult she’d been taught represents Christ on earth. “In persona Christi” (in the person of Christ), the priest forgives your sins, transforms bread and wine into the body and blood of Christ and interprets the Bible in his sermons. In so doing, he provides parishioners with guidance on living a life that will ensure their entrance to heaven to sit at the right hand of God. Catholic children look up to priests–we’re supposed to admire, respect and trust them.

The betrayal of that trust is nothing short of criminal. The way officials of the Roman Catholic Church have treated reports of sexual abuse by priests has been unforgiveable as well as criminal. They denied, ignored and, in many cases, tried to discredit the accuser. They have treated the victims with a shocking lack of concern while trying to protect their own reputations and shield the perpetrators.

Although survivors of priest abuse have worked for years to expose both the priests and those who have covered up for them, not nearly enough has been done to rectify these crimes and protect young people in the church. Therefore, on September 13, SNAP leaders and the Center for Constitutional Rights are filing a formal complaint with the International Criminal Court (ICC) at the Hague, urging it to investigate and prosecute high level Vatican officials for crimes against humanity.

Rape and other forms of sexual violence are specifically included in the definition of crimes against humanity that are under the jurisdiction of the ICC. In addition, the ICC will hold superiors criminally responsible for crimes committed by subordinates as a result of the superior’s failure to exercise control over them.

Over the past few decades, in the U.S. alone, nearly 6,000 priests have been publicly accused of molesting children and SNAP believes there may be as many as 100,000 American victims.

But this isn’t just an American phenomenon–it’s global. An estimated 20,000 abusive priests are still working in other countries, and allegations of their sexual abuse of children have been made in every corner of the world. A few examples:

Belgium: There are 300 cases of alleged sexual abuse in nearly every diocese. Two-thirds of those abused were boys; 13 alleged victims committed suicide.

Ireland: Three reports state that thousands of abuse cases were ignored or denied by Irish Catholic officials. One report documented 60 years of abuse at residential institutions run by 18 religious orders.

Germany: In the home of the Pope, 18 German Roman Catholic dioceses are under investigation for claims of abuse.

Philippines: The Philippines Catholic Church has acknowledged and apologized for sexual abuse by hundreds of its priests over the last 20 years.

On April 15, 2010, the Associated Press reported that 30 priests accused of abuse were transferred or moved abroad by the church, one step ahead of local law enforcement. Many gained access to children in other countries, and some abused again. The report covered 21 nations on six continents.

But while the Church plays a shell game of moving their predatory clergy away from local authorities, survivors are now taking their case to an international tribunal. “We have no idea how long it will take, but we’re not going away,” says David Clohessy, director of SNAP. “Of roughly 200 countries, only a few have bishops have even committed to removing sex offenders from the ministry.” Only a handful of dioceses have a zero-tolerance policy, and even then it’s sporadically enforced. And don’t think priest abuse is a historical problem; it’s current and ongoing.

In its complaint to the ICC, SNAP asks for the investigation of the pope himself, Benedict XVI (formerly known as Cardinal Joseph Alois Ratzinger), along with his closest advisers–Cardinals Tarcisio Bertoni, Angelo Sodano and William Joseph Levada. The suit alleges that these four men have supervised, participated or colluded in moving predatory priests from one parish (or country) to another, keeping them one step ahead of the victims’ families and civil authorities.

We need to keep our eyes on this case and hope the Court recognizes the crimes against humanity that officials of the Roman Catholic Church have committed around the world. SNAP is asking supporters to contact the ICC and urge them to take up the case.

In the end, Church officials may be grateful to the court if it prosecutes and finds them guilty of crimes against humanity. After all, it does not impose the death penalty. Jesus Christ’s teachings are the foundation of the Roman Catholic Church, and he would have dealt with them more harshly. He said, “But whoso shall offend one of these little ones which believe in me, it were better for him that a millstone were hanged about his neck, and that he were drowned in the depth of the sea.” (Matthew 18:6)