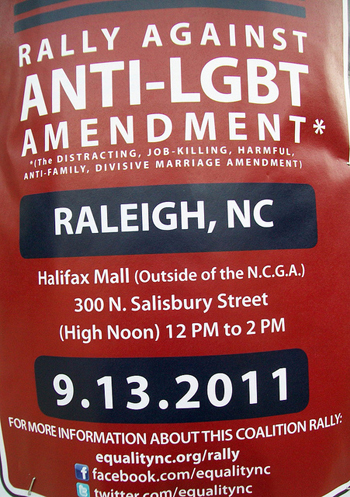 At just the time that the national tide seems to be turning in favor of same-sex marriage, North Carolina wants to make doubly sure that it’s banned in the state.

Yesterday, the North Carolina Senate voted by a margin of 30-16 in favor of a bill that, if approved by the state’s electorate, would amend the state’s constitution to prohibit not only same-sex marriage but domestic partnerships and civil unions. Senate Bill 514 (PDF) will now be placed on the ballot in May 2012, on the day voters go to the polls to vote in the Republican primary. There’s already a law against same-sex marriage in the state, so this would just further seal the deal.

The language of the bill is sweeping:

An Act to amend the constitution to provide that marriage between one man and one woman is the only domestic legal union that shall be valid or recognized in this state.

University of North Carolina law professor Maxine Eichner, in an e-mail to all of the North Carolina state legislators, urged lawmakers to slow down and consider the potential fallout from the bill’s “vague and untested language”:

[T]he proposed Amendment’s scope is still unclear, potentially far reaching, and has the possible result of unsettling the rights of committed but unmarried couples in a number of legal areas. It could take years of litigation for courts to resolve these issues.

The bill’s sponsor, Republican Sen. James Forrester, has been trying for eight years to get a constitutional amendment prohibiting same-sex unions on the ballot. Forrester defines marriage as “an institution in our society based upon the complementary male and female loin.” As reported by the Gaston Gazette, Forrester explained his views in more detail at a town-hall meeting, in which he called the LGBT-friendly city of Asheville, N.C. a “cesspool of sin”:

Forrester said that if he was a homosexual, he’d ‘target’ the Tar Heel State to practice homosexual ‘mischief’ because there’s no constitutional law prohibiting it. …

‘If this bill does not pass then homosexuality will be taught into public school as the norm,’ Forrester said at the meeting. ‘Do you want that? No. The homosexuals want to have their lifestyle considered normal.’

Check out more of Forrester’s views on gay people’s “unhealthy lifestyle” in this video.

The rhetoric of sin was on the lips of those who hurled insults at openly gay North Carolina Democrat Rep. Marcus Brandon, as he headed into the legislative session, calling him an “abomination” and saying he was “going to hell.”  Brandon asked his fellow legislators to consider the harm to gay youth that will be caused by the inevitably vitriolic campaign that will take place in the months to come.

The Obama Administration has declared that no state interest is served by prohibiting same-sex marriages and that, because of this, the Federal Defense of Marriage Act (DOMA) is unconstitutional. In a statement issued yesterday to the Washington Blade, White House spokesperson Shin Inouye commented on the North Carolina bill:

The President has long believed that gay and lesbian couples deserve the same rights and legal protections as straight couples. That’s why he has called for repeal of the so-called ‘Defense of Marriage Act’ and determined that his Administration would no longer defend the constitutionality of DOMA in the courts. He has also said that the states should determine for themselves how best to uphold the rights of their own citizens.

While the President does not weigh in on every single action taken by legislative bodies in our country, the record is clear that the President has long opposed divisive and discriminatory efforts to deny rights and benefits to same sex couples. The President believes strongly in stopping laws designed to take rights away.

A recent poll of North Carolina voters found that if the ballot referendum took place today 55 percent of the state would vote against it; only 30 percent would support it. Even a 47 percent plurality of Republicans would reject the bill. In other words, a majority of North Carolinians believe that lesbians and gays deserve the same rights as straight citizens, even though many continue to draw the line at granting same-sex unions the name “marriage.”

The catch-all language of the anti-LGBT measure may well be its downfall if it passes and is taken to court. In trying to close off any and all avenues for same-sex unions to receive legal recognition, the proponents of this bill have shown that they’re not just against committed lesbian and gay couples benefiting from the right to marry; they’re against lesbians and gay men, period. Proponents of this bill would do well to heed the lessons of California’s Proposition 8 decision, in which Judge Vaughn Walker faulted the proponents of Prop 8 for their bait-and-switch tactics of campaigning on the basis of hostility toward lesbians and gays and then coming into court with a different set of arguments:

The evidence at trial regarding the campaign to pass Proposition 8 uncloaks the most likely explanation for its passage: a desire to advance the belief that opposite-sex couples are morally superior to same-sex couples. (See my earlier discussion of the Prop 8 decision.)

It would behoove the supporters of this bill to make their real motives visible. I want to see “Marriage=Male and Female Complementary Loin” on a bumper sticker, alongside one that reads “Keep Homosexual Mischief-Makers Out of North Carolina.” Put the hatred up front and find out how well that goes over with voters. And, please, whatever you do, keep your kids away from the TV set during this campaign—because bigotry is harmful to children.