"Do You Mind Taking a Short Detour So I Can Vote?" - Ms. Magazine
Skip to content 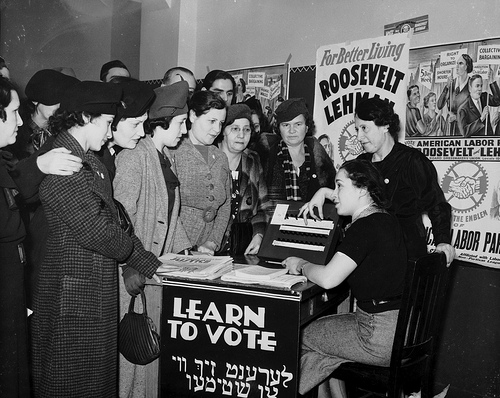 While visiting the NCJW Section in Rochester, New York, yesterday, my host, Mollie, turned to me and asked, “Do you mind taking a short detour so I can vote?” Yesterday, September 13, was primary election day in New York state,  and Mollie needed to vote in the school board primary. We entered the local elementary school —Mollie’s polling station—and I sat smiling as she cast her ballot. Mollie’s children are no longer in school; she could have easily skipped that detour to the polling place. But, as a former teacher, she is passionate about education; and, as a longtime National Council of Jewish Women member, Mollie knows that her vote is critical.

Education and teachers are in the news these days. They were front and center last week as President Obama unveiled the American Jobs Act, a bill that includes, among other things, money to protect the jobs of 280,000 teachers and improve crumbling school buildings. On the walk up the steps of that elementary school, I was reminded just what a powerful impact that proposal could have. Teachers (who, more often than not, are women) will be able to continue to support their families. Children in classrooms will be better prepared for the 21st century economy. And communities will benefit from increased economic activity and lower rates of unemployment.

Now that I’m back in Washington, DC, I will turn my attention to making sure that the American Jobs Act receives the consideration and support in Congress that it deserves. Since the recession officially ended, women have continued to lose jobs as men’s employment has improved. The American Jobs Act is an important step toward ending that devastating trend.

Women are depending on their elected officials to understand the unique challenges that we face in the current economy. That’s why women’s groups like NCJW are speaking out on the American Jobs Act. And that’s why NCJW plays an active role in the HERvotes initiative: to educate and mobilize voters who care about women’s Health and Economic Rights leading up to the November 2012 elections.

It is my hope that through this initiative NCJW and our allies will inspire more voters like Mollie, voters who are willing to take a few minutes — on a beautiful, sunny day — to cast their ballots because they know that in every election our health and economic rights are at stake.

Emily Alfano is a senior legislative associate at the National Council of Jewish Women, and works with federal legislators, federal agencies, and advocates from other national organizations to promote NCJW’s priorities on a range of issues. Emily’s portfolio includes issues related to domestic violence, health care, poverty and low-income Americans, and working families. Emily also works closely with the NCJW grassroots staff to educate NCJW members and empower them to take action at the federal, state, and local levels. In addition, Emily is the lead staff person on Higher Ground: NCJW’s Domestic Violence Campaign, a new campaign designed to address violence against women by promoting women’s economic security. Prior to joining NCJW, Emily was a public policy coordinator at Genetic Alliance, where she focused on public policy issues related to the genetics field, namely genetic discrimination and stem cell research.