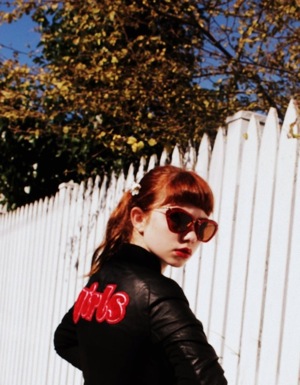 When we last spoke with Tavi Gevinson, uber-precocious 15-year-old fashion blogger and out feminist, she was talking about launching a reboot of feminist ’90s teen magazine Sassy (which shared offices with Ms.) A year later, she’s made it happen. In honor of Tavi’s new accomplishment, the online mag Rookie, an aesthetically astute, hip teen site with a feminist outlook that features writers such as Miranda July and Sady Doyle, we checked in with Tavi on her new endeavor.

TG:  It was good. Not that much of it was Fashion Week. I went to three shows. A lot of it was working on Rookie!

When we spoke with you earlier, you mentioned that you wanted to see a Sassy 2.0, then you went out and made one. How did you do it?

On my blog, I kind of said, “This is gonna happen, and I don’t really know how yet, but we’re forming a staff and we’re trying, and this is what you do to submit.” Within 10 days I got about 2,900 emails, so me and Anaheed Alani, our editorial director and story editor, went through the submissions and basically formed our staff from that. Then when the summer started we had a meeting with the New York writers and whoever could come and everything kind of came together.

What’s your role at Rookie? Are you the boss?

I’m editor-in-chief. We’re a small team right now. Anaheed and I decide on the content each month based on our writers’ pitches and some of our own ideas. We both interact with the photographers, illustrators and writers, and I check everything the night before it goes up. I’m kind of a photo editor too I guess: I chose all the photos for the mood board you see when you click “Beginnings.” Each month I tell our photographers and illustrators what kinds of colors and imagery to use to fit our monthly theme. We change the background every day and I choose that—aesthetics are very important to me to make Rookie unique and add to the magazine feel. I’d like to get to a point where I can just do the fun content stuff, but the first months and year of a business aren’t supposed to be easy.

You mentioned to New York magazine that you attended SlutWalk. What did you think?

I went to the Chicago one, which one of our Rookie writers, Jamie Keiles, co-organized. I went with friends from school. It was just a really incredible feeling because normally you couldn’t walk around looking like that, but now there was this whole group behind you. It was a lot of fun. School had just let out, it was hot out, and we just ran around in the fountains and stuff. It was fun being with my friends–for a while a lot of my interest in feminism was something online and not really part of something that I did offline.

I think they are effective because I saw people from my school there who wouldn’t have been at something overtly political, like Walk for Choice. It felt more personal than political, personal in a way that brought people together.

You once took on Seventeen magazine for fat- and ugly- shaming, saying that teen girls are more than their looks. What are your rules for Rookie?  Are you doing a website about empowerment … or fashion?

My interests veer more towards aesthetics, so in September with the “Beginnings” theme, there has been much more on the site about that stuff. It is feminist in points of view, but when you’re a teenager, there’s a lot going on and it’s hard to make a connection between something really political and the things that are going on in everyday life. Feminism is inherent to the point of view rather than us saying, “This event happened at this time and is important because of this.” You can’t just preach all the time.

We did a satire of something you see a lot in magazines—the “what you’re eating, what you should eat instead” piece. [The Rookie piece recommends eating “half a string of string cheese,” “1 YouTube video of someone preparing pasta” and “a weird thing we found on the Internet.”] And we had a lot of adults write in saying “This isn’t what girls need. You should be telling them how to eat healthy. They aren’t going to get what you’re saying.” But the thing is, they do. What we aren’t going to do is repeat the same “love yourself” stuff that’s everywhere, but is then accompanied by tons of Photoshop.

What do the kids in your school think about feminism? Do you think it’s perceived as a cool thing?

Our school claims to be really liberal and there are kids at my school that claim to be so liberal, but then they’ll still say sexist jokes. Last year, a guy who was a junior ranked the sophomore girls and made very personal, inappropriate comments about the girls, and he was just one guy, but then everyone was passing it around on Facebook and stuff like that. I mean, blogger Molly Lambert, who I really love, has a great piece on This Recording where she says, “If you are a liberal, but you still have sexist attitudes towards women, then you’re just a misogynist in a sweater.” You aren’t subversive and fighting against “the power” or whatever if you are still misogynist and sexist.

What’s in store for you and your projects?

I want to work on Rookie for a while. I feel creative and I like that. I know I’m going to college, but I don’t know beyond that. I want to do different things. I don’t want to be tied down.