What Would Make "Whitney" Worth Watching? - Ms. Magazine
Skip to content 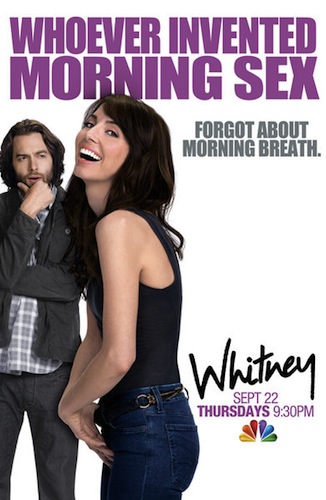 I’m not familiar with Whitney Cummings’ stand-up, so I watched the pilot of her eponymous sitcom with an open mind. In fact, after reading a New York Times interview in which she was asked if she’d slept her way to the top, I was willing it to be fantastic.

Turns out, my willing skills are out of whack.

It’s not that I hated “Whitney.” I even liked a few things about it: the use of “She Said” by Plan B in the opening scene, that Whitney wanted to wear a hoodie to a wedding and that she unselfconsciously stuffed her face with cupcakes at the reception.

The problem is, very little about the show felt fresh. It started with Whitney in front of the mirror, curling her eyelashes, her mouth wide open. The idea that women sometimes open their mouths while doing their eye-makeup wasn’t a new observation 20 years ago. Whitney and her live-in boyfriend Alex then get into an all-out, deodorant-spraying fight for mirror space, setting up the thesis of the show: that men and women are constantly in battle (another character later announces that dating is “a warzone”). But we learned nothing about these specific characters except that they’re a couple and they enjoy good hygiene, and it seemed like a waste of 40 seconds.

At the wedding, we were introduced to Whitney and Alex’s friends, but not given any reason to like this assortment of primarily white, exclusively heterosexual, able-bodied, cisgender characters straight from sitcom central casting. There was a Joey Tribbiani/Barney Stinson sexist charmer archetype who came across as pure sleaze, a couple still in the honeymoon phase of their relationship (they kissed a lot; he carried her purse) and an opinionated woman who drew the ire of one of the kissers by wearing pants to the wedding. (The show is big on gender essentialism, the most egregious example of which was the suggestion that Alex “had sex” with an unconscious Whitney on their last anniversary–i.e., raped her, though the show didn’t see it that way.)

In conversation with these cardboard cut-outs, Whitney discovers she and Alex are having sex less often than Cosmo claims they should be. So, (because a couple’s sex life is always the woman’s responsibility), she decides to spice things up. Although this storyline has been done many times before and I preferred “Mad About You”’s take on it, I must give “Whitney” props for a scene that showed the promise of a stronger show. Her insistence that Alex fill out reams of insurance information while she was dressed as a sexy nurse made me laugh, and I saw the show’s individuality for the first time.

In fact, it made me wonder if this was the type of story Cummings wanted to tell, and the network was trying to push her into a more conventional style. While she’s clearly stereotypically pretty, more appealing is her oddball quality. If the show played on this, ditched the laugh track and dared to be a little darker, as well as drawing from Cummings’ real-life experiences rather than the work of a hundred sitcom writers before her, it could actually be worth watching. As it stands, it isn’t.