My Story; Our Story - Ms. Magazine
Skip to content 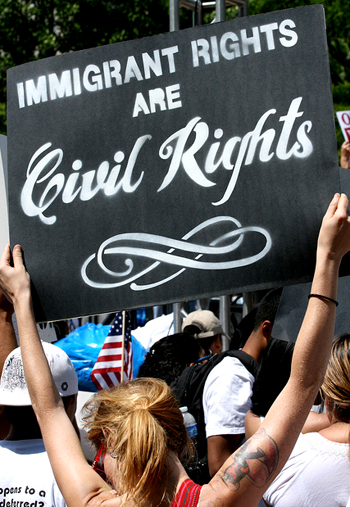 As an immigrant, a woman, a social worker and a professor who teaches about the immigrant experience in the United States, I feel very connected to other immigrants throughout this country on many levels. And so I am keenly aware of the effects of restrictive immigration policies such as HB 87 in Georgia, HB 497 in Utah, SB 1070 in Arizona and the about-to-go-into-effect HB 56 in Alabama. They are not only oppressive to immigrants; they are reactive, reductive responses to the complexities of the immigration issues in this country.

My mother migrated to New York City in 1969 when my sister were 8 and 10 years old, respectively, leaving us at home in Grenada. As a single parent, for five years she parented us from a distance while working three low-paying jobs to support all of us financially. She worked days, nights and weekends, taking any job that came her way to keep us sheltered, fed and clothed. During the entire time, she had two dreams: (1) to be reunited with her daughters and (2) to provide us with an opportunity to get an education so we could be self-sufficient and not subjected to the same exploitive and repressive working conditions she had to endure for so long.

Today, my mother has an Associate’s degree, my sister has a Master’s degree in Public Administration and I have a Ph.D. in Social Welfare. I am indebted to my mother for her sacrifice, endurance, work ethic and for her commitment to my sister and me. We grew up knowing that being an immigrant meant having to work hard and make sacrifices. As a result, our number one role model is our mother. My son now is on his way to realizing his dream as well–and not only does he have his dad and me as his biggest supporters, he is blessed with the support of his aunt and grandmother.

My family’s story is not unlike that of other immigrant groups that came before and after us: English, Germans, Irish, Italians, Jews, Asians, Africans, Mexicans, etc. As an immigrant, I am dedicated to help others who are faced with horrendous restrictions, such as HB 87–which forces some women to choose between being killed by their abusers or deported. If this policy had existed for the early immigrant groups that this country recruited, welcomed and supported generations ago, we wouldn’t be the country we are today. Instead of engaging in these knee-jerk responses, Americans two-, three-, four-, and five-generations removed from their ancestral migratory experience should come to the table and find solutions that work in the best interest of the country, while keeping in mind, There but by the grace of God goes my ancestor.

Historically, whenever the United States is experiencing economic difficulties, it has responded with restrictive, oppressive legislation and policies that are punitive to immigrants, especially people of color. This was evident with the slave trade of African immigrants, the Chinese Exclusionary Act of 1882 and the deportation of Mexican Americans during the Great Depression (many of whom were U.S. citizens).

Yet although there has always been anti-immigrant rhetoric, policies and practices–including against the early immigrants from Southern and Eastern Europe–eventually these groups have assimilated into the American society. So I ask myself, why have the protracted discrimination and punitive laws against certain groups persisted for such an extended period of time? The answer, I suspect, is that race, color and physical characteristics have prevented these new immigrants from hiding or assimilating. Even if they change their names, they can’t change their skin color, physical characteristics or their race. Immigrants today are punished twice. They are punished for being newcomers and also for their racial and physical appearance.

For these immigrants there is no melting pot. They are denied access to the American society. Every possible obstacle is put in their way when they try to adapt. I realize how fortunate my family was because at that time we arrived in New York, we were not faced with restrictive policies such as Georgia’s HB 87. It could have happened to us. I cannot stand apart from the struggle of today’s immigrant.

Reprinted with permission from MomsRising. Part of a blog carnival accompanying the “We Belong Together” women’s delegation to Georgia September 28-29, which aims to expose human rights violations brought on by Georgia’s anti-immigrant bill HB 87.