Feminist Art Does It in Public - Ms. Magazine
Skip to content 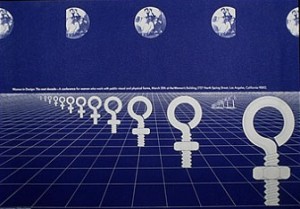 The exhibit “Doin’ It in Public: Feminism and Art at The Woman’s Building,” opens tomorrow afternoon, October 1, in Los Angeles (and continues through January 28, 2012). Here’s a remembrance of the famed feminist cultural center from someone who was there:

A young woman artist, Jazzmin Meins, entered the large room on roller skates, her body wrapped neck-to-ankles in medical gauze. As she skated around in front of the audience, she slowly unwrapped the gauze—until she stood before us naked. Then she went into a crouch and laid an egg. Literally.

That was my introduction to “performance art” at The Woman’s Building in downtown Los Angeles, the first public center in the U.S. devoted to feminist art. It was 1974, a revolutionary time for the “second sex”, and when art met feminism the results were unlike what most of us had seen before: brash, raw, in your face, stripped-down (performance artists often disrobed, the metaphor of self-revelation inescapable) and all about the brilliant and messy realities of being a woman.

What a change from the art history I had studied at UCLA in the late 1960s/early ’70s. Our hefty primary text—H.W. Janson’s History of Art—included no woman artist. Not even Mary Cassatt, the American Impressionist known for her pretty portraits of mothers and daughters—inoffensive, acceptable female subject matter.

But what happened if young women artists wanted to bust out of that mold? My friend Paula Gray, who studied at L.A.’s Chouinard Art Institute in the 1960s, was once snarled at by a teacher that her work was “so goddamn bold and crude.” It would have been a high compliment to a male artist.

Or women art students were treated as fragile flowers. “A friend of mine told me I shouldn’t take welding because I wasn’t strong enough,” says Susan King, who studied in university art schools before coming to The Woman’s Building. “So I ended up in ceramics—where I had to lift 50-pound kiln shelves and 100-pound bags of clay.”

Three disaffected teachers at the California Institute for the Arts (Cal Arts)—visual artist Judy Chicago, art historian Arlene Raven and graphic designer Sheila Levrant de Bretteville—felt that they could no longer realize their feminist ideals within institutional confines, so in the flush of the era’s fervor started their own school: the Feminist Studio Workshop (FSW), the primary Woman’s Building tenant.

“We were coming out of the late-1960s’ organizing against authority that was oppressive and against overlooking of people who weren’t white male,” says de Bretteville (who went on to become the first woman tenured at the Yale University School of Art). “Most of my desires [in starting FSW] had to do with not having to go ask some guy whether I could do something I wanted to do!”

The charismatic Chicago (née Cohen—a number of women in the arts changed their names at the time, proclaiming new identities) had first developed her feminist teaching methodology at California State University in Fresno. Then she and artist Miriam Schapiro started the Cal Arts program just north of L.A. Pre-Woman’s Building, their students famously transformed a derelict mansion in downtown Los Angeles into “Womanhouse”—complete with a crocheted womb room, menstruation bathroom, egg-breast kitchen and bridal staircase.

Raven (née Rubin)’s mission was to unearth and honor all the fabulous women artists that Janson left out; De Bretteville (her married surname) was eager to explore visual ways to promote equal participation and nurture conversations among people with diverse viewpoints. Together, the three could incubate their ideas with a group of young women who flocked to the building from around the U.S., Canada and even Europe.

Aside from the FSW, The Woman’s Building housed other women’s art galleries and small businesses, including a feminist bookstore and the L.A. office of NOW. It took its name from the Woman’s Building at the 1893 World’s Columbian Exposition in Chicago—designed by a woman architect, Sophia Hayden. It was the perfect role model: That building honored women’s art, crafts and historical achievements, and was the site of speeches by suffragists such as Susan B. Anthony and Lucy Stone.

But the name “Woman’s Building” proved surprisingly provocative in the early 1970s. Men would often ask us, “So where is the men’s building?” I couldn’t help but hear that as a combination of “How dare you make your own space?” and “Waaah, you’re leaving us out!” But we had a simple answer: “Every other building in town.”

The idea was to make your art public. De Bretteville encouraged women to take the books, postcards and posters women created in the building’s Women’s Graphics Center and disseminate them. Equally public were performances and installations by art “collectives” that were formed by FSW students. The “Lesbian Art Project” made lesbians more visible at a time when stepping outside the closet wasn’t as safe or as common as it is today. And the “Incest Project” put forth an exhibition that brought a painfully taboo subject to public attention. “One of the writers at the Los Angeles Times told me that the only reason she could write about incest is that we had a show about it,” says de Bretteville.

We certainly needed a public space for women’s art, because the mainstream art world wasn’t providing any room. In 1970, less than 5 percent of the artists featured in the prestigious Biennial at New York’s Whitney Museum of American Art were female. Similarly, in 1971, the L.A. County Museum of Art’s huge “Art and Technology” exhibit was 100 percent male (with only one non-white artist). Don’t even ask how few women were represented at big-name private art galleries.

With The Woman’s Building (which was in existence from 1973-1991), we could right the imbalances by, yes, building a feminist world with our own hands. As the co-administrator of the building, I was also given the chance to curate a number of women’s art shows—most excitingly, one of legendary photographer Imogen Cunningham’s work. I heard great writers like Jill Johnston and Margaret Atwood read their work at our fervent little enclave. I even wrote and printed a self-made “artist’s book” (one whose primary purpose may be visual and conceptual more than textual)—unknowingly the beginning of my future career. I was, proudly, part of feminist history.

That history still lives within each of us who spent time at the building, where we learned that not only was the personal political, but so was art. One sign of triumph for this art-history student: The newest edition of Janson’s Basic History of Art has a painting by a woman, Artemisia Gentileschi, on its cover!

Excerpted from the Summer 2011 issue of Ms. To read the rest, join the Ms. Community!

Above poster designed by Sheila Levrant de Bretteville for the Women in Design conference at the Woman’s Building in 1975.