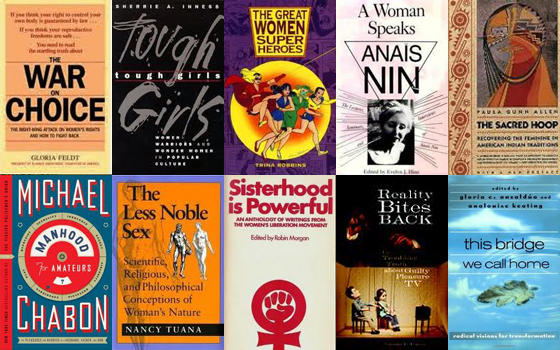 Two paeans to superheroines add whimsy to choices 80 to 71, which also include a classic ’70s anthology from a notable Ms. editor and our list’s first crack at dissecting the anti-choice movement. We also have a look at Native America traditions, an incisive takedown of reality TV and interviews with a famous sex writer. Coming in at the top of this segment is a warm-hearted look at fatherhood and partnership from a man’s point of view.

80. Sisterhood is Powerful: An Anthology of Writings from the Women’s Liberation Movement
by Robin Morgan, editor
Vintage Press, 1970
The first anthology of its kind, Sisterhood is Powerful (by current Ms. Global Editor Robin Morgan!) contains essays by prominent feminists from Flo Kennedy to Kate Millett, historical documents and contact information for feminist organizations. Those last may be a little out of date, but the essays are timeless. Find it here.

79. The Great Women Superheroes
by Trina Robbins
Kitchen Sink Press, 1996
Comic artist and writer Robbins provides a detailed feminist history of women superheroes and supervillains from the ’40s to the ’90s, including little-knowns such as the Blonde Phantom and Miss Fury. Find it here.

78. Reality Bites Back: The Troubling Truth About Guilty Pleasure TV
by Jennifer L. Pozner
Seal Press, 2010
After penning the 2004 Ms. essay, “The Unreal World: Why women on “reality TV” have to be hot, desperate and dumb,” media critic Pozner found she had reams to write on the gender and race biases of reality TV and how they mess with our heads. Thus was born this highly necessary deconstruction of reality shows. Find it here.

77. Tough Girls: Women Warriors and Wonder Women in Popular Culture
by Sherrie A. Inness
University of Pennsylvania Press, 1998
Pop culture’s tough women offer us a template for change, writes Inness. “The female hero can rescript stereotypes about what it means to be a woman. Just by being, she suggests that the male stranglehold on the heroic can be subverted.” Find it here.

75. A Woman Speaks: The Lectures, Seminars and Interviews of Anaïs Nin
by Evelyn Hinz, editor
Swallow Press, 1975
This collection of writings by French-born novelist, eroticist and short story writer Anaïs Nin covers relationships, creativity, the struggle for wholeness and women reconstructing the world. Find it here.

74. The Less Noble Sex: Scientific, Religious, and Philosophical Conceptions of Woman’s Nature
by Nancy Tuana
Indiana University Press, 1993
Tuana’s investigation of deeply-rooted Western ideas of woman from the classical age to the 19th Century reveals the way science has been influenced by philosophy and religion–and vice versa. Find it here.

73. The War on Choice: The Right-Wing Attack on Women’s Rights and How to Fight Back
by Gloria Feldt
Bantam, 2004
This accessible and impassioned book from the former president of Planned Parenthood tells the stories of women whose lives have been affected by anti-abortion court decisions and federal policies, and offers a plan of action for fighting back. Find it here.

71. Manhood for Amateurs
by Michael Chabon
Harper, 2009
The New York Times called him “an immensely gifted writer and a magical prose stylist,” and he doesn’t disappoint with this collection of essays on subjects ranging from circumcision, baseball, marijuana, superheroes, imagination to, most of all, masculinity. Find it here.

What do you think of these picks? What are your guesses for the top 10? We’ll be rolling out ten each day, and here’s a teaser for tomorrow: Our first book on the list written by a prison escapee.