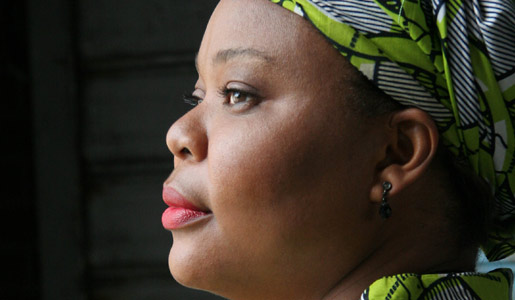 I had the honor of interviewing Liberian activist Leymah Roberta Gbowee just a few weeks ago, so you can imagine my excitement when she won the 2011 Nobel Peace Prize today (along with Liberian President Ellen Johnson Sirleaf and Yemeni journalist Tawakkul Karman). During Liberia’s lengthy civil war, Gbowee organized women across religious, ethnic and class lines to mobilize for peace–and afterwards, for democratic change.

Her leadership of the influential Liberian women’s movement was featured in the documentary Pray the Devil Back to Hell, airing on PBS October 18 as part of their new mini-series Women, War and Peace. Gbowee is now the executive director of the Women Peace and Security Network Africa (WISPEN-Africa), which promotes women’s leadership in peace processes throughout Africa.

Your memoir Mighty Be our Powers was just released. It’s a gripping, deeply personal story; an extraordinary read. Do you feel any sense of trepidation about having your life story out for the world to read?

Not really. I think I am just an ordinary woman with an ordinary story. My story is not unique to me. My story is the struggle of every young woman who has lived and survived conflict. The beauty of it, to me, is that it can be read as a lesson, or a test, or an encouragement that one can go through all of these things and still come out sane.

In a 2009 interview, you referred to yourself as an “African feminist.” What does that mean to you, and do you still consider yourself one?

I still do consider myself an African feminist. It’s the region I come from. But women’s issues don’t have a nationality. You’ll find that women are victims of domestic violence in the U.S., and in Asia, and in Africa. Although you do not see overt conflict, like civil wars, in the U.S., there are wars going on everyday in the lives of women.

In 2009, I had the opportunity to spend the entire afternoon with Gloria Steinem. And that was a memorable afternoon for me. Sitting down with her and listening to her talk about some of the issues that she’s gone through as a women’s rights activist–it was just so amazing because I was like, Oh my god, I thought this was so unique to us.

Women currently make up only about 17 percent of Liberia’s senators and 13 percent of its representatives. The Gender Equity Bill, which would have required 30 percent of political office holders to be women, was defeated last spring. Here in the U.S., women are only 17 percent of Congress members. What do you feel is the best way forward for women in government?

The power and strength of the collectiveness with which we go into other issues, like maternal health and peace–if we could put those powers into politics it would be resounding. Right now, you’re seeing a dwindling number of women in politics. That’s because we haven’t come together as a group like we’ve done on other issues to say, This is our issue, and we’re going to push, and we’re going to use this as our battle cry: women in government.

The U.N. has called to have more women officers and security forces. Is that something that you think would be helpful?

It’s helpful to have them there, but they cannot be there as toys to dress up a group. It’s only helpful if they’re in the field and engaging with people. Let them work with the community members to prosecute rape, to show that gender-based violence can be talked about and really handled and addressed. But don’t just have them stand and keep guard at different checkpoints without engaging.

You have this very hopeful tone at the end of your book, talking about how faith and hard work and perseverance changed a nation at war. When somebody puts down the book, what’s the first thing you hope someone does?

When you finish reading, the first thing I hope you do is look at the space you’re in and see the difference that you’re making now. See that as a great thing FIRST. Because people—especially women—tend to minimize what we do. We tend to see it as not contributing at all.

Secondly, if you find yourself in a space where you have enormous power to make change and you’re saying to yourself, “Oh, I can’t do it, or it’s not within my reach to do it,” my challenge to you, after you put that book down, is to rise up. Whether it’s in your backyard, your front yard or your office: DO SOMETHING. Mighty be our powers! I’m not just talking about the powers of Liberian women or African women, but about the unique power that each and every woman possesses. And that power should really translate into bringing beauty and hope and peace into the world.

Do you think that the visibility and power of women has shifted in the last decade or so?

What has happened is that people are looking more to women. But this looking to women has not led to women gaining resources to turn their situation around. The world has recognized that yes, there is nothing that can happen in this world without women. But the powerbrokers are still men.

How to you talk to girls and women about how they should interpret or even use the media?

Every day—especially in the field of peace-building—there’s a new article. I spend a lot of time on the computer, but I spend a lot of time reading. I try to understand the issues that I work with. And this is what I say to women and to girls: don’t just be content with, I’ve been in this office and I’ve been a secretary for life and I want to stay this way until I’m retired. Push for growth. Push for something more.

I tell them that people appreciate a woman who can stand up and speak clearly, articulating the issues that she’s working with. I have nothing against Facebook—it’s a good tool for mobilizing—but don’t just use it for social gossip and other things. There’s a lot of learning that you can take from all of the social media and social networking. And I think that’s where young people need to focus their attention, not [showing] off how they look.

The new PBS series that you’re a part of–Women, War, and Peace–what are you hoping that this mini series will do?

I’m hoping that this will start a revolution for women in America, not just for domestic issues, but also foreign policies. There should be constant questioning. For instance, about some of the wars: Is this necessary? Is it good for our kids to be out there?

Photos of Gbowee (top) and Liberian women protesting for peace (bottom) from NobelPrize.org.