Money for Nukes, No; For People, Yes - Ms. Magazine
Skip to content I need to get this out of the way immediately: I attended an event at the Ronald Reagan Presidential Library.

I know, I know. You’d sooner walk on hot coals barefoot than set a well-covered foot onto the floor of the Reagan Library, unless you were there for a protest. Normally, so would I. But there was a good reason for my trip to the steamy Simi Valley in 100 degreeweather: I went to hear government, business and policy leaders talk about the unsupportable costs of nuclear weapons programs.

They were there as part of the Global Zero Summit, an organization that wants to eliminate all nuclear weapons.

My interest wasn’t radiation so much as the economic fallout of the more than $100 billion spent each year on nuclear arms programs around the world, with the United States alone spending $50 billion. That’s six times more than China and five times more than Russia.

We’re no longer surprised that the current crop of conservative Republicans want to slash spending on Medicare, Social Security, Pell grants and pretty much anything that might help out the 99 percent of us who aren’t billionaires. But it was a surprise to find that there are other Republicans–such as those who attended the Summit–who want to slash the defense budget and radically decrease U.S. funding for nuclear weapons.

This vanishing breed of GOP foreign policy centrists joined the other participants in the Summit, including current and former government, military and diplomatic officials from the U.S. as well as from India, Japan, Israel, Turkey, Pakistan, Egypt, Russia, France and Korea. Academics, representatives from nonprofits and philanthropists/activists Jeffrey Skoll and Richard Branson also took part in the proceedings. Needless to say, the majority of participants were male but I was struck by the number of representatives of the Reagan and George H.W. Bush Administrations who spoke about how the money we waste on nuclear weapons could be spent creating jobs, rebuilding our infrastructure, education and taking care of our citizens.

But conservatives in Congress don’t seem interested in anything that doesn’t comport with their image of themselves as macho men who carry guns, keep women in their place and don’t need government for anything other than lining the pockets of their defense-contractor pals and corporate sugar daddies. And they also need government support to erect outdated, nuclear-tipped missiles. 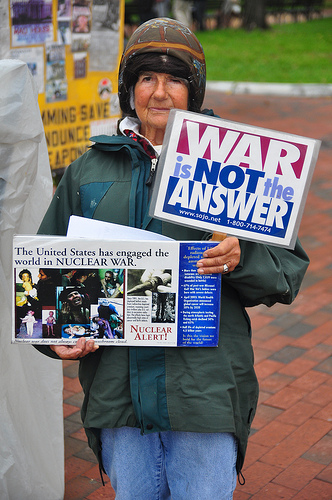 While we think about spending $500 billion over the next ten years on nuclear weapons and related programs, the congressional Supercommittee that’s working on deficit reduction needs to remember that:

—46.2 million American are living below the poverty line; 57.8 percent are women

—14 million are unemployed, and since women are nearly 50 percent more likely to work in the public sector than are men, we’ll see their out-of-work numbers increase as Republican budget cuts force more and more public employees onto unemployment rolls

—28 percent of uninsured women ages 18-64 are single heads of households.

—1.6 million people are homeless, of which approximately 1/3 are members of households with children

In a letter to the Supercommittee, Congressman Edward Markey (D-Mass) and 79 House Democrats asked it to reset our priorities and “invest in the people and programs to get America back on track.”

One of those priority resets should be nuclear weapons. In the spirit of bipartisanship, I quote the Republican president who understood the cost of militarizing our nation and our budget, Dwight D. Eisenhower. In a speech given to the American Society of Newspaper Editors on Apr. 16, 1953, he said:

Every gun that is made, every warship launched, every rocket fired signifies, in the final sense, a theft from those who hunger and are not fed, those who are cold and are not clothed. This world in arms is not spending money alone. It is spending the sweat of its laborers, the genius of its scientists, the hopes of its children.

It’s not too late. Each of us needs to contact our senators, members of Congress and members of the Supercommittee and urge them to invest in Americans, not defense contractors.

TOP LEFT: A closeup of the fireball and mushroom cloud from the Upshot-Knothole Grable atomic bomb, photo from Wikimedia Commons. BOTTOM RIGHT: Longtime anti-war protestor outside the White House in Novemeber, 2009. Photo from Flickr user kansasphoto under Creative Commons 2.0